You are probably wondering whether or not a fan can set off a smoke detector. Great question. We have done all the research needed about this topic and have answers for you.

Yes, a fan can set off a smoke detector if it is photoelectric. This is due to disturbing dust particles, crossing the path of light, and therefore setting off the smoke detector. 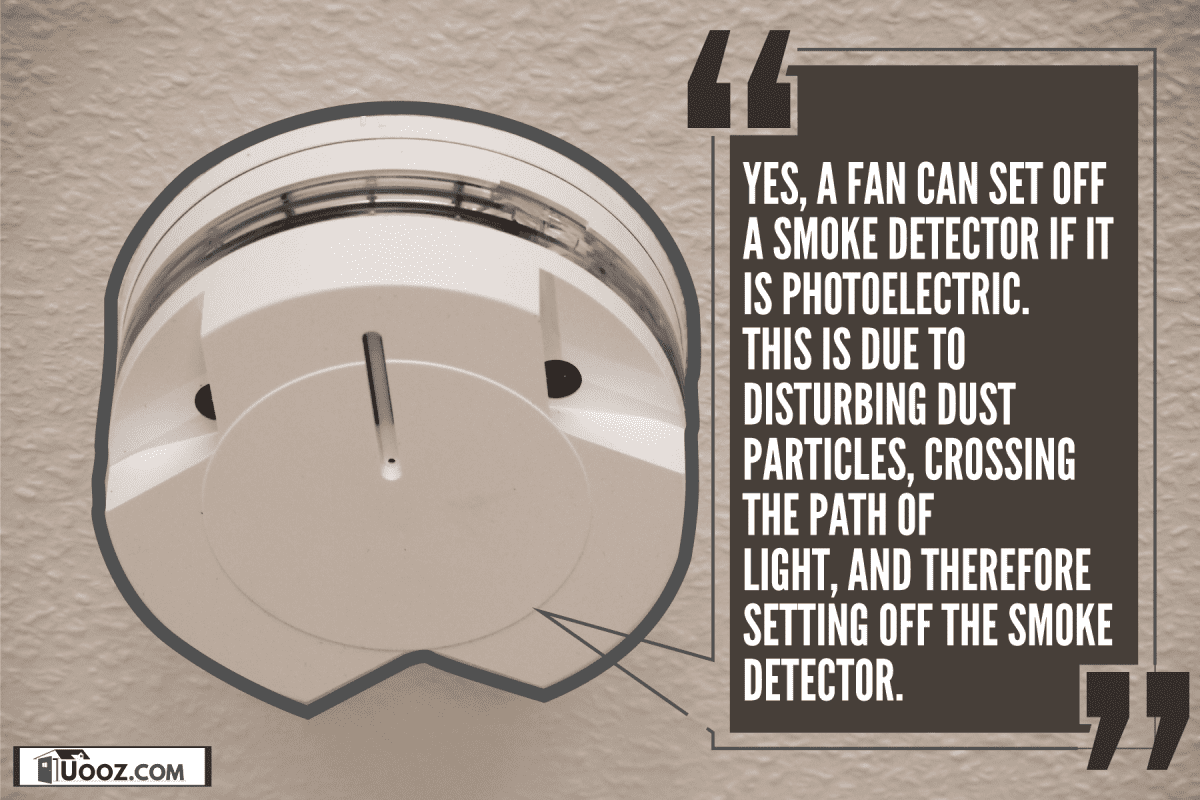 What You Need to Know About Smoke Detectors

The reason photoelectric smoke detectors have the potential to be set off by a fan is that the optical chamber inside detects dust, causing the path of light to be disturbed.

Most smoke detectors run off of a 9-volt battery or AA batteries. Look at the back of the box or package it is in when you buy it. If it was already mounted when you moved in, you could take the cover off to check and go from there. 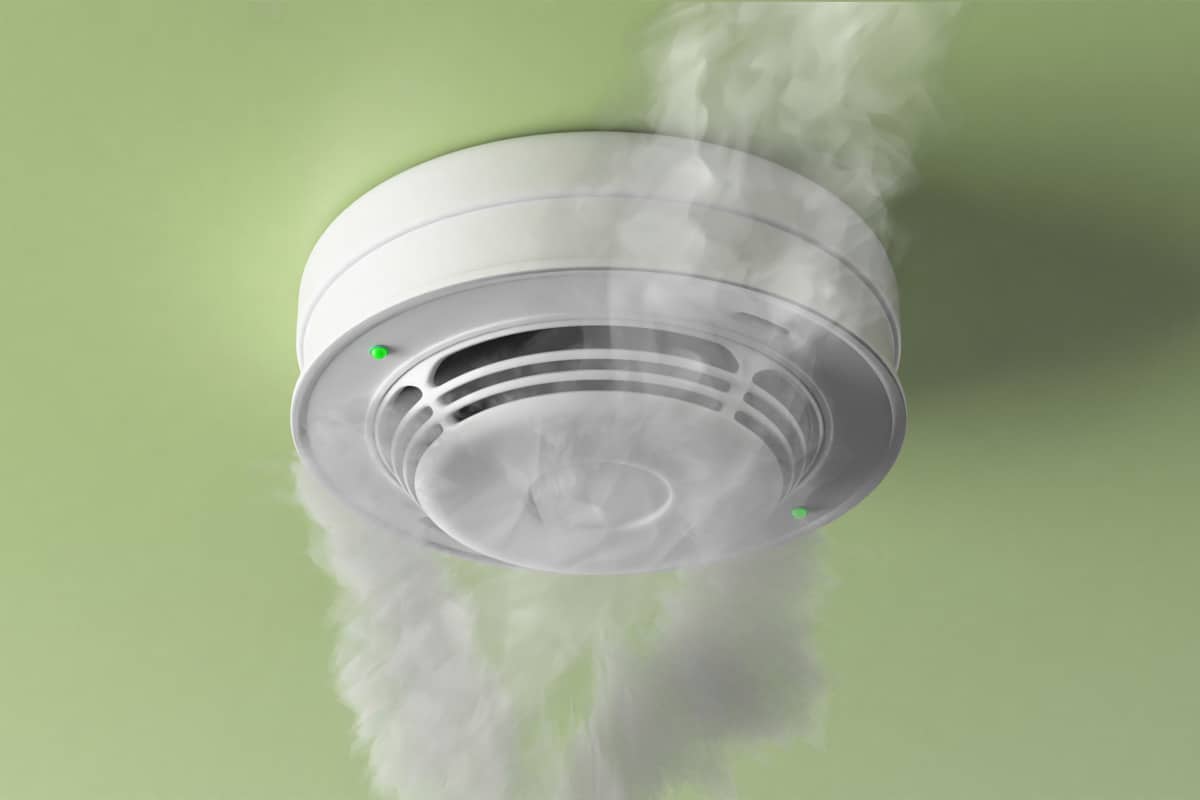 How far does a smoke detector have to be from a fan?

When installing smoke detectors, you should install them at least three feet from the closest fan. A fan will re-circulate smoke causing a smoke detector to sound the alarm even longer. That is why you need a minimum of three feet of space between the smoke detector and ceiling fan. 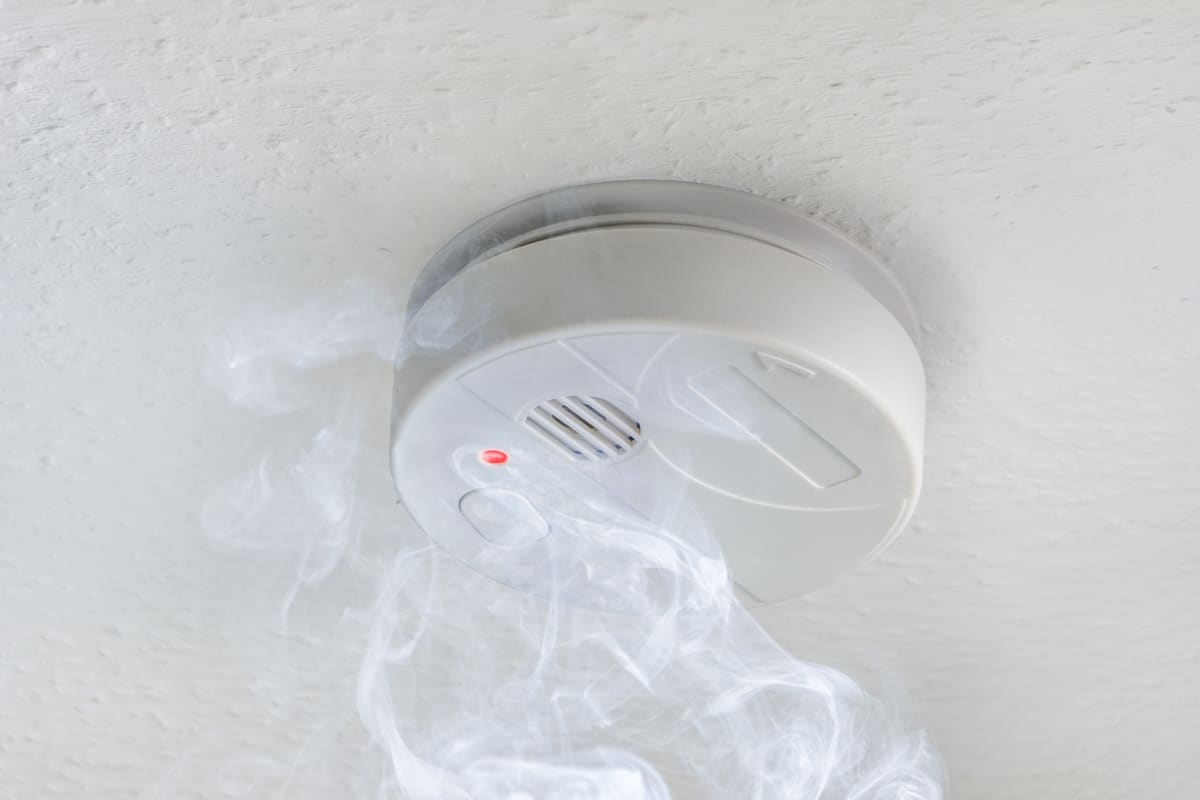 A slower fan doesn't clear the air as quickly. A fast fan is preferable when trying to move smoke out of the room. Open a window or two and door if needed to create a draft in a moment when you're combating temporary smoke. An example would be when you are cooking bacon.

Click here to see this smoke alarm on Amazon.

Where do smoke detectors go in bedrooms?

Installing a smoke detector in your bedroom could be life or death. It is not worth the risk to skip this step. A smoke detector should be installed in all sleeping areas in your home.

You should leave at least one and a half feet of space between any corner and the smoke detector.

In an area such as a studio apartment where your bedroom may be in the same open space as your kitchen, the smoke alarm should be ten feet or more from any cooking appliance. 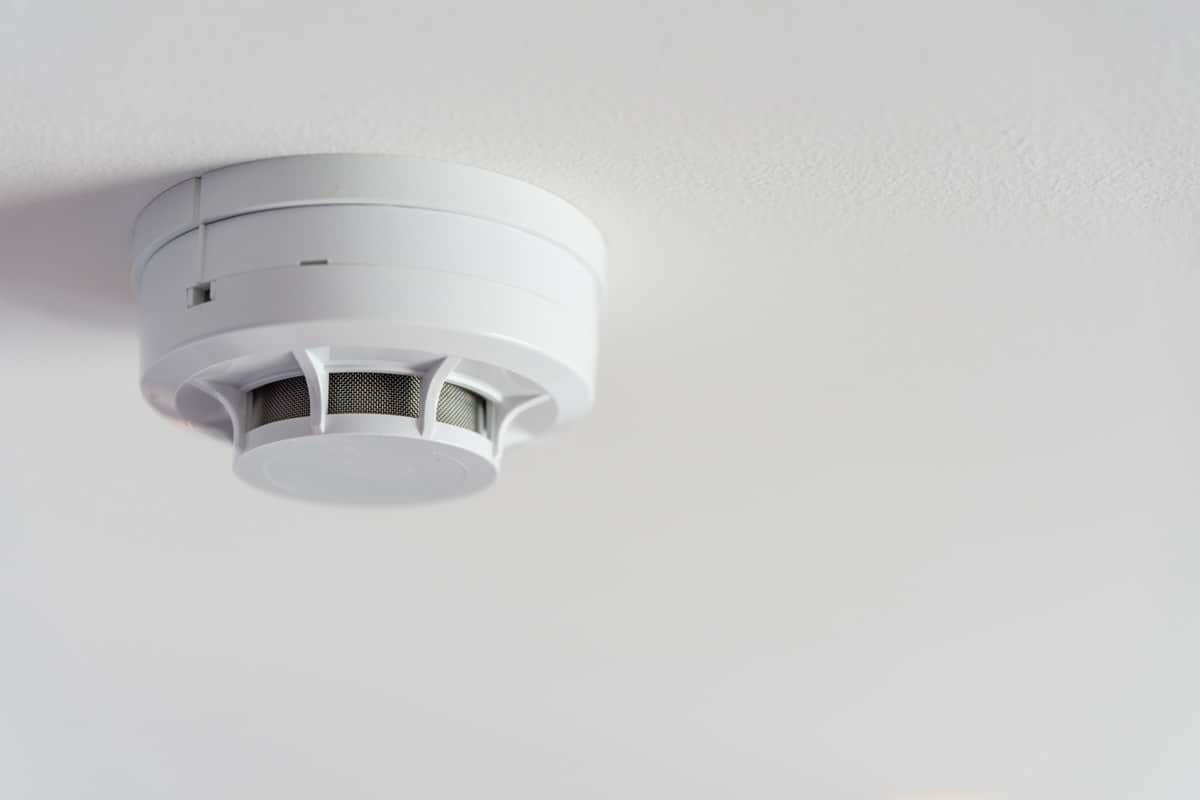 If the smoke alarm in your home is not on the ceiling, it is okay for it to be placed high up on the wall instead.

Why do smoke alarms go off for no reason?

Knowing what type of smoke alarm you have makes this question easier to answer. Check the packaging or product description to learn more about your smoke detector.

You might have a photoelectric smoke alarm which can be set off when dust particles mess with the path of light inside. This action sets off the sensor, which causes the alarm to sound.

If this happens often, investing in an air purifier may be a good idea. Having cleaner air will make it less likely that dust will accumulate, causing your smoke alarm to go off.

Click here to see this air purifier on Amazon.

Another reason smoke detectors go off for seemingly no reason is if the battery is not changed as often as it should be.

Change the battery and see if that makes your smoke alarm stop going off randomly. Humidity can set off smoke alarms, and steam can cause it to happen too.

How can I stop my smoke detector from going off? 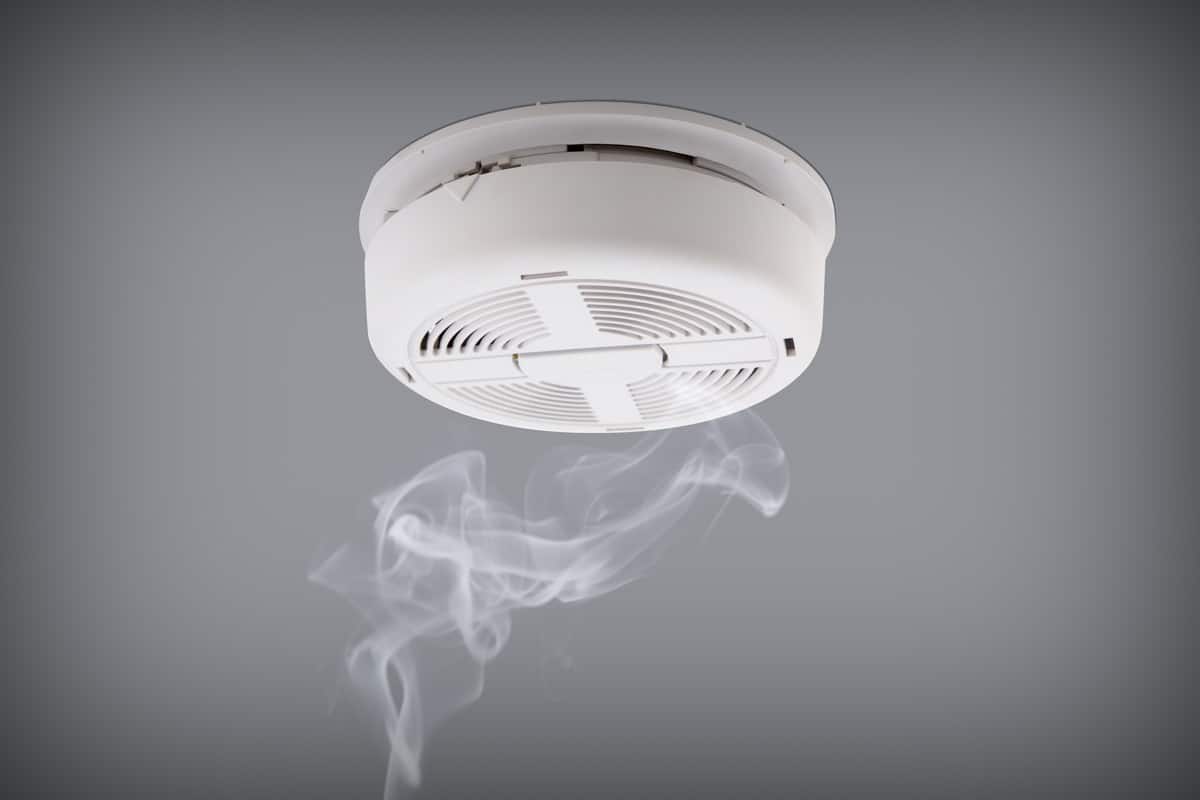 Placing your smoke detector far away from cooking appliances and ceiling fans can help reduce the risk of it going off.

Make sure you mount any smoke detector on the ceiling or high on a wall. If you place them too low, they are more likely to go off for a bit of smoke, such as when someone burns sage or is cooking in the kitchen.

Even the steam from your bathroom after a hot shower can set off a smoke detector. This is another reason why their placement is crucial.

Be mindful of where you place your smoke detector when it is near a stove. You do not want to mount a smoke detector right above an oven. This will cause false alarms because something as simple as boiling water will set it off if it is that close.

Your smoke detector may chirp whenever your house cools down, especially in the evening or at night. It causes the same sound to beep or chirp that having a low battery makes.

This is because of the change in air temperature. Sometimes you will notice your smoke alarm making noise at night.

Why is the red light flashing on my smoke detector?

Click here to see this smoke detector on Amazon.

To be safe, you should replace the smoke alarms in your home every ten years. That is because the sensors wear out over time. Replacing the whole unit every ten years ensures you stay safe.

You should reset the smoke detector after replacing the battery or batteries.

You can always check the original packaging or product description online if you want to know more about the smoke detectors in your home. If you are going to replace your smoke detectors, you should install the same type throughout your house.

Some smoke alarms even have the option to connect to the other smoke alarms in the house so that if one goes off, they all go off.

In a scenario where the smoke alarms in your home are connected, you need to double-check their placement. You certainly do not want to have a false alarm if it will cause them all to go off simultaneously. 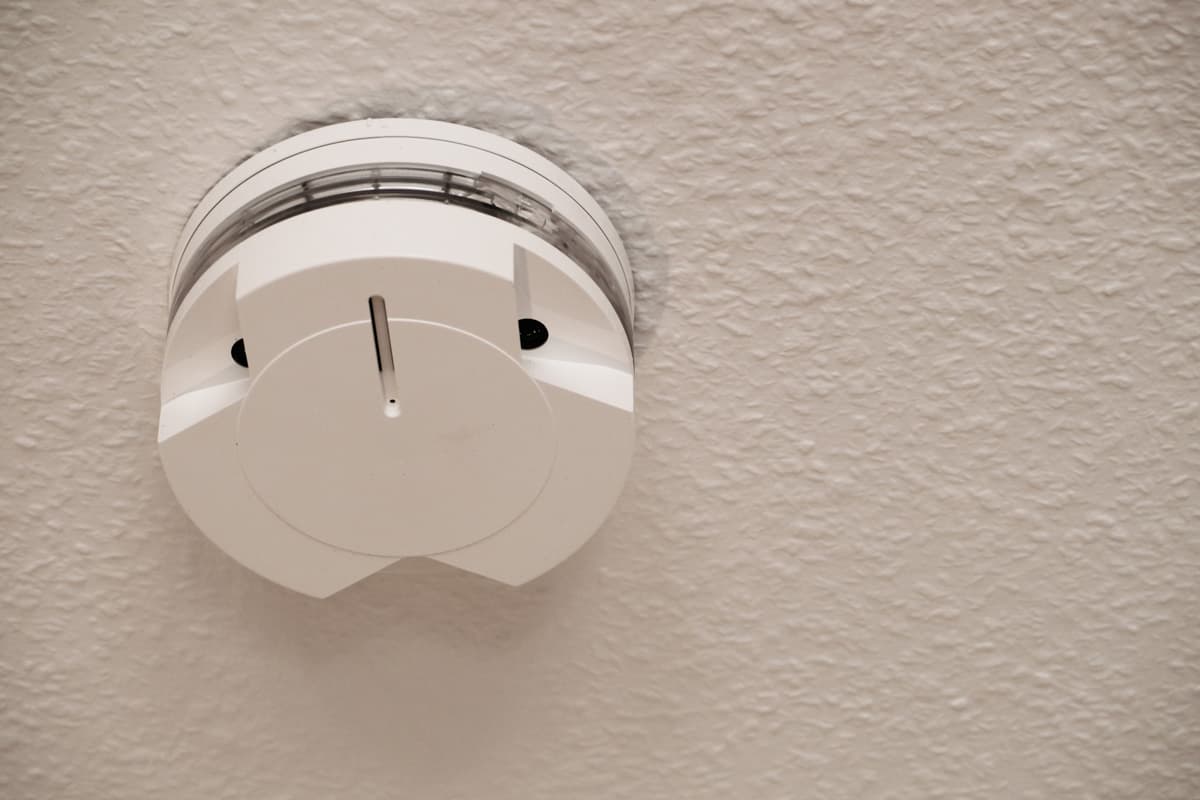 In most cases, a fan will not set off your smoke alarm. They do help re-circulate air, though. This helps smoke clear more quickly when you have some that can be displaced.

If you have a photoelectric smoke alarm, you have a higher chance that a fan will set it off.

Before you go, check out the following links about some topics that might interest you:

How To Turn Off Door Chime On Alarm System?

Can You Wait Too Long Between Coats of Paint?

How To Install A Range Hood Vent Through Exterior Wall?

What Will A Black Light Show On Carpet?

How To Fill A Gap Between Wood Floor And Wall

Where To Put A Desk In A Bedroom [7 Great Ideas!]

Does A Cedar Fence Need To Be Sealed Or Otherwise Treated?

Can PEX Pipes Freeze And Burst? What homeowners need to know

How To Install Vinyl Or Hardwood On Stairs With Nosewood