When a house has structural problems, such as drooping floors, the homeowner may become concerned about the cost of repairs. However, for minor foundation problems, installing a set of lally columns can be a relatively simple fix in crawl spaces or basements. Fortunately, we have already done extensive research on how far apart you can install a lally column.

Lally columns do not have a specific spacing. However, 8-10 feet is a very usual range. Lally column spacing is determined primarily by the beam's deflection and load needs, and secondarily by the column's load capacity.

Keep reading to learn more about a lally column, whether it is permanent or temporary, and whether it can be installed outside. We'll also cover how to install it, when to replace it, and how much weight it can support. As well as the various column types. 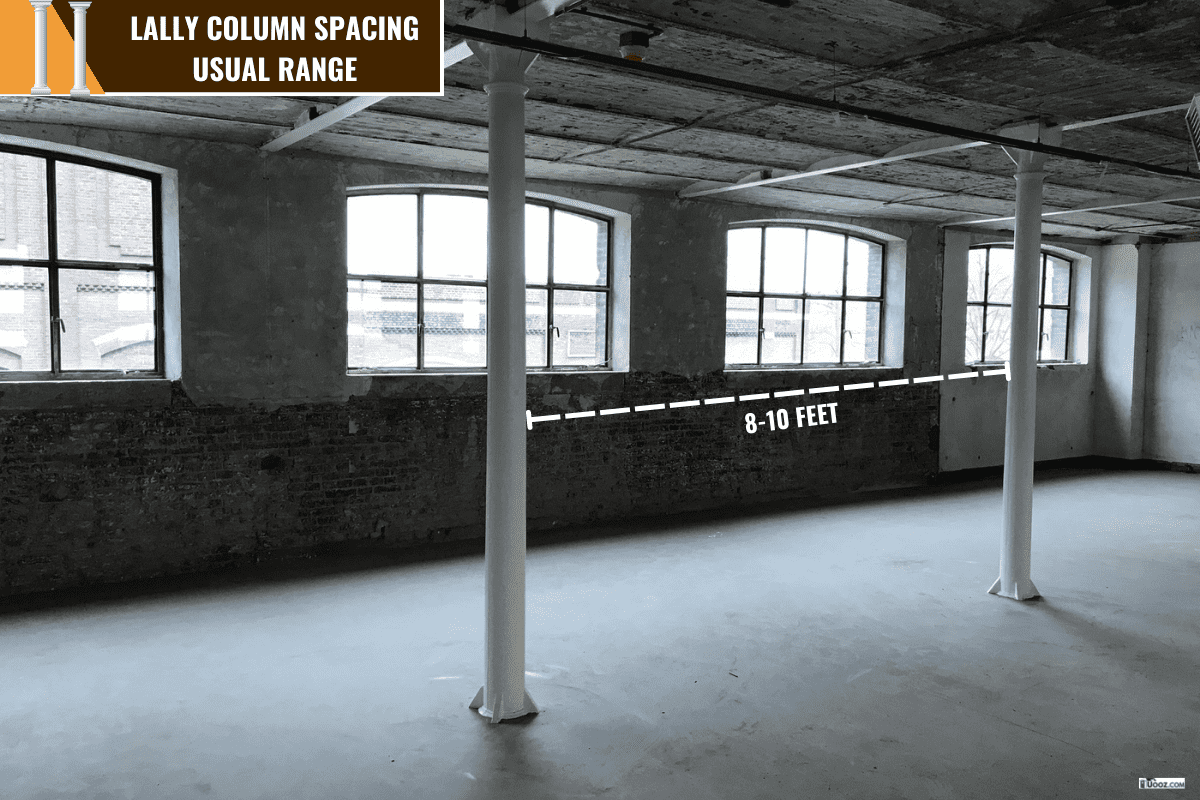 What Is A Lally Column?

A lally column is a thin-walled steel column with a height adjustment, normally cylindrical in cross section, and is used to support building parts. This type of column may be adjusted to fulfill height needs using a screw-out top plate or a telescoping arrangement of interior parts. 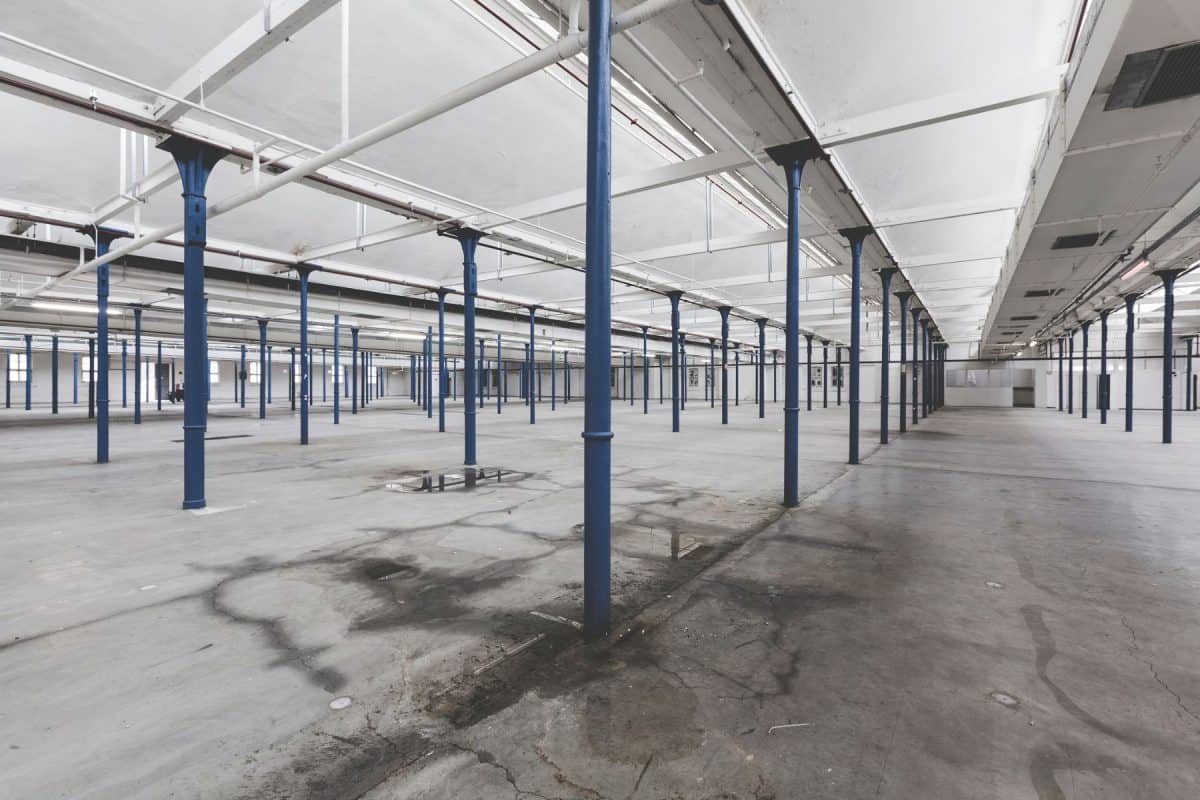 Lally columns are typically employed as temporary supports during the installation of permanent structural components, although they can also be kept in place as extra columns. The columns are frequently equipped with head and foot plates to distribute loads and prevent the cylinder from gouging into the supporting timber.

What Is Permanent And Temporary Lally Columns?

Lally columns can be both temporary and permanent. Workers typically employ temporary columns to reinforce the floor joists above when demolishing a wall. Permanent columns occasionally reinforce the structure under a house, in the crawlspace, or basement.

Can Lally Columns Be Used Outdoors? 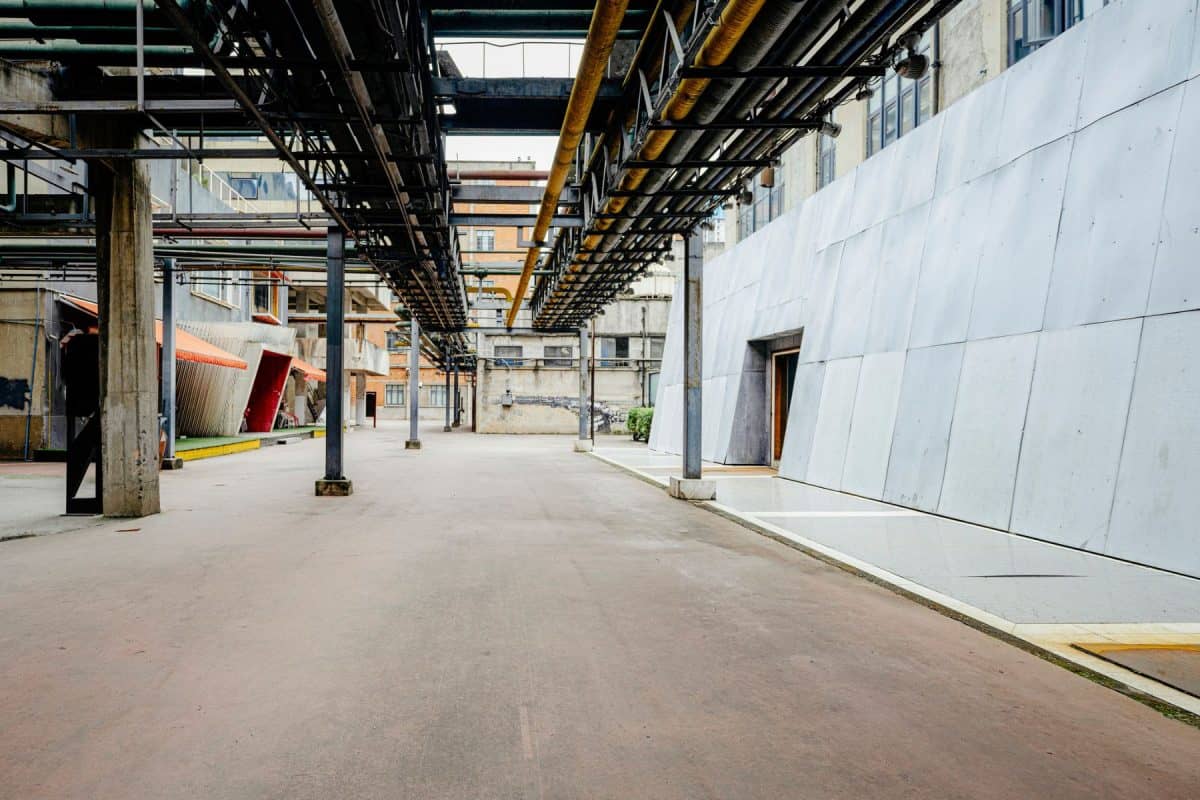 Yes, but consider using quality exterior paint to avoid corrosion at the base of the lally column. Also, lally columns are designed to resist vertical loads; they cannot bear horizontal or lateral loads. As a result, it should be avoided where there is lateral load.

How To Install A Lally Column?

If you're restoring a floor or demolishing a wall, you'll almost certainly need to install some Lally columns, either permanently or temporarily. The following are the steps involved in Lally column installation:

Determine the vertical distance to be covered. There is an adjustment range for the machine screw assembly inside each class of lally column.

A common adjustment range is 4'. For instance, if you need to support an 8' tall beam, you'd need a lally column that spans from 7' 9" to 8' 1". Even if a column may be altered, you want to keep the screw part as low as possible to avoid compromising its strength.

The column's metal plate must be installed on the bottom of the LVL, also known as a laminated veneer lumber beam. You must first determine the ideal place for the plate before detaching it and connecting it to the top of the lally column. The lally column must be elevated to the load-bearing beam's bottom.

Connect the metal plate to the lally column's top. Turn the machine screw on the column until it is about 1/2" short of the space between the floor and the bottom of the load-carrying beam.

If the adjustment mechanism's lever is detachable, move it out of the way and store it somewhere secure. However, keep the lever close in case adjustments are required.

What Is The Maximum Weight That A Lally Column Can Support?

The weight-bearing capability of a lally column is highly dependent on its size. A short lally column may withstand greater weight than a long column. A lally column can range in length from 1-12 feet or more, which is common in the construction sectors.

A greater load resistance capacity will come from a decrease in length and an increase in diameter. Aside from dimensions, the weight-bearing ability is also affected by the strength of the screws and the top and bottom plates.

When Should You Replace Your Lally Column?

What Are The Different Types Of Columns

Columns are primarily classified based on the materials used in their construction and their structural characteristics.

Let's go through each type of column in detail.

Based on Construction Materials

The term "timber column" refers to a column made of wood. In the previous century, timber columns were popular. Timber is commonly found in old buildings because it is the only widely available construction material.

Timber is a strong and long-lasting building material if properly cared for. Timber seasoning is the process of removing moisture from the wood to increase its strength and reduce its weight.

An RCC is a steel-reinforced concrete column.

This kind of column is frequently used in building construction. Concrete has a high compression strength but low tensile strength. As a result, steel reinforcement is used to increase the tension capacity of the material.

Types Of Columns Based On Shape 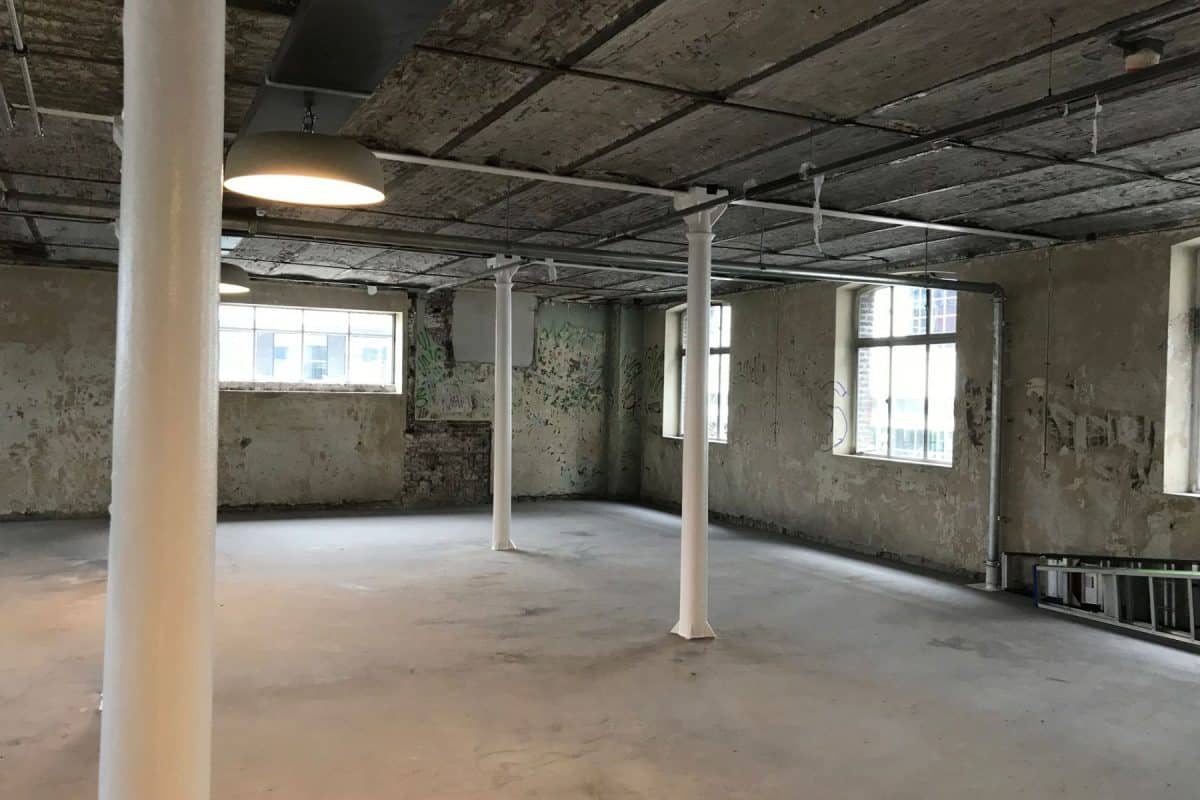 These columns are widely used for piling and building elevation for practical reasons. A circular column is reinforced with more than four longitudinal steel bars, and its bending resistance is greater than that of a square or rectangular column. Due to their high resistance to deflection, circular columns are commonly used as bridge pillars in addition to buildings.

Large structures and buildings frequently use these columns. Rectangular or square columns are much easier to construct and cast than circular columns due to the ease of shutting and supporting it from collapsing due to pressure while the concrete is still in flowable form. The rectangular or square ones are the best and most affordable.

The L-type column is used to construct boundary walls, metro rail turns, and flyovers. T-shaped columns are similar to square and rectangular columns and are commonly used in bridge and retaining wall construction.

Based On the Slenderness Ratio

A column is considered long when its effective length to its shortest lateral dimension exceeds 12. Buckling is a common cause of column failure. Long columns have a lower cross-sectional area than short columns and are not considered ideal.

The formula for calculating the coefficient reduction is given below;

b = least lateral dimension of the column

A short column has a ratio of less than 12 between its effective length and its shortest lateral dimension. Shearing is the most common cause of mechanical failure in short columns.

b = least lateral dimension of the column

Based On The Type Of Reinforcement

The columns are made up of structural steel or cast iron columns encased in concrete and reinforced with longitudinal and spiral reinforcement that prevents steel corrosion. Composite columns are commonly used in truss structures. 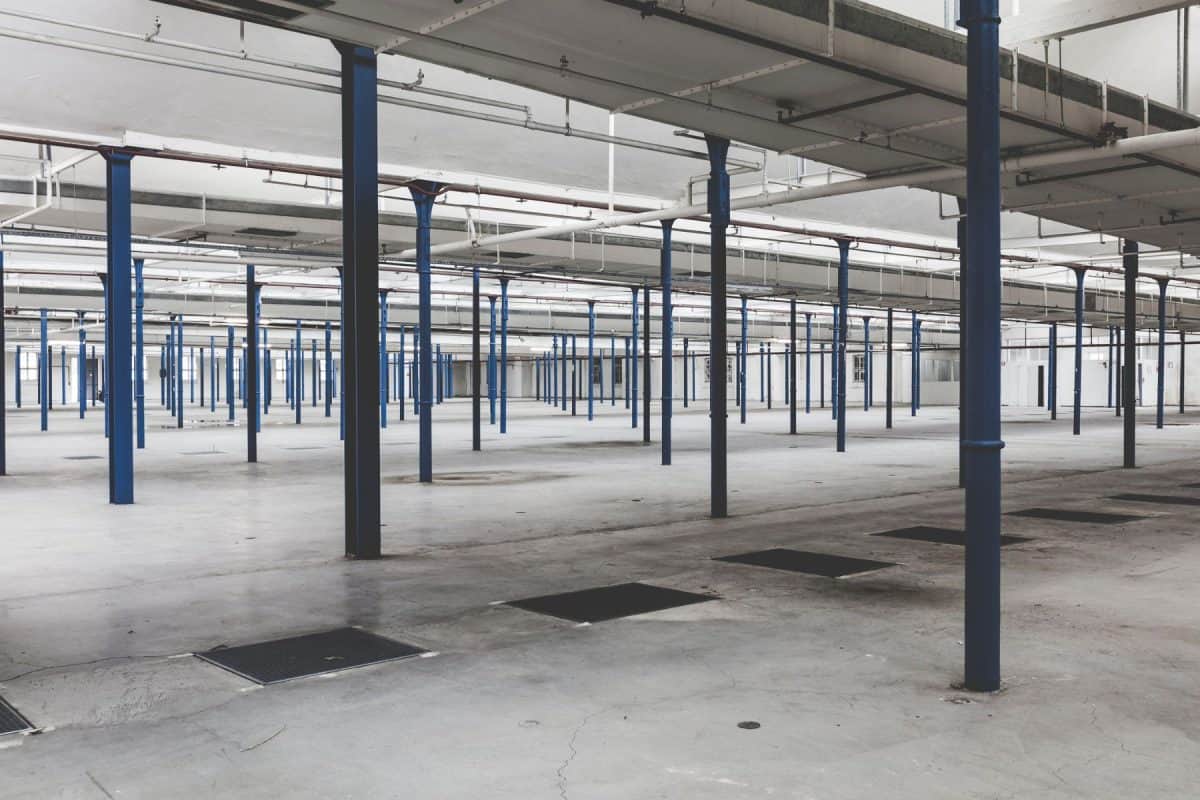 Lally columns can be extremely useful when dealing with structural issues in your home or planning a complex remodel. All you have to do is figure out how much space to leave between your lally columns. You can deal with foundation issues or wall renovations much more conveniently.

Have you made it to the end? If you want to discover more exciting topics, check out these other posts:

How Far Apart Should Deck Joists And Posts Be?

How Do You Replace Front Porch Columns?

Can You Put A Keypad On A Sliding Door?

How To Get Oil And Grease Marks Off Oak Doors

How To Make Wood Floor Filler From Sawdust

How To Pour A Concrete Floor For An Existing Garage

How To Keep Laundry Room Pipes From Freezing

Whirlpool Dryer Won’t Start – What To Do?