Since the Cold War ended, the threat of nuclear attack hasn't been heavy on most people's minds. Until 2018, when Hawaii sent out a warning of an imminent ballistic missile strike to all islands' devices. While this ballistic missile warning was issued accidentally, it brought the threat of nuclear attack back into the forefront of people's thoughts. The possibility of safely surviving a nuclear bomb became a question to be answered. More specifically, in the event of a nuclear bomb exploding, we've researched whether the basement offers enough protection to stay safe.

Although it can protect you from a nuclear bomb, whether or not any specific basement type protects you is a complicated question. If you're curious about whether your basement would be adequate protection, we encourage you to continue reading as we discuss the above factors in greater detail. We'll also answer some other questions you might have regarding surviving a nuclear bomb. 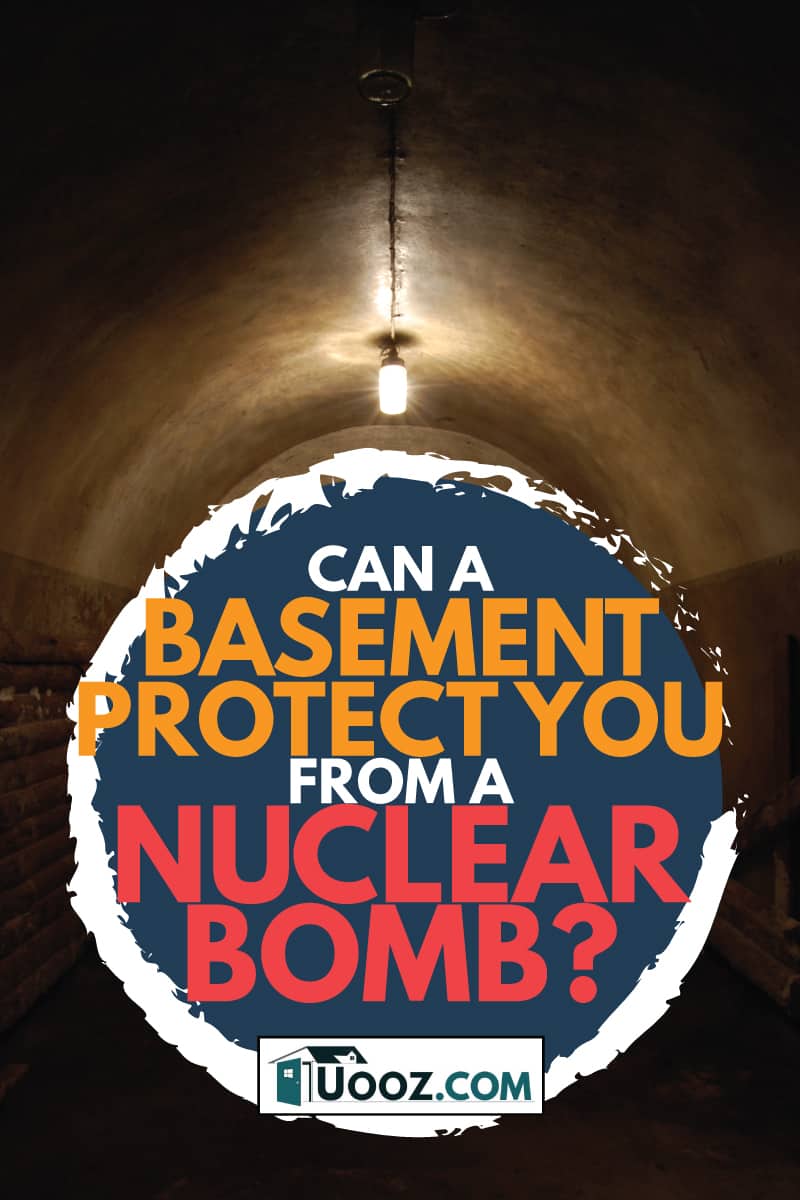 For a clearer understanding, we need to know a little about how nuclear bombs work. They are generally detonated in the air above a target, so destructive force isn't lost by the ground's absorption. There is an initial fireball from the explosion, which engulfs everything in its radius, generally half a mile wide. It is possible to survive this fireball if you are inside a building or underground, but within this area outdoors, it is highly unlikely to stand up to the blast. At this time, there is also an incredibly bright flash that can blind anyone looking at it for up to a minute.

Because they all travel at roughly the speed of light, the flash and two other waves will hit nearly simultaneously. They are a pulse of thermal energy (or heat) and a pulse of radiation. The heatwave can cause severe and painless burns as the pain-receptor nerves are also killed. The radiation will damage cells and cause radiation poisoning if too much is absorbed.

After the initial detonation, a massive air blast spreads out over a much wider range than previous waves. Air blasts cause the most damage from nuclear bombs and can severely damage as far as a few miles from the detonation point. I will point out here that being inside a building can limit the risks involved with each of these effects, especially outside of the half-mile zone of highest destruction. Basements are even better as they are underground and have slightly more protection from the soil around them. 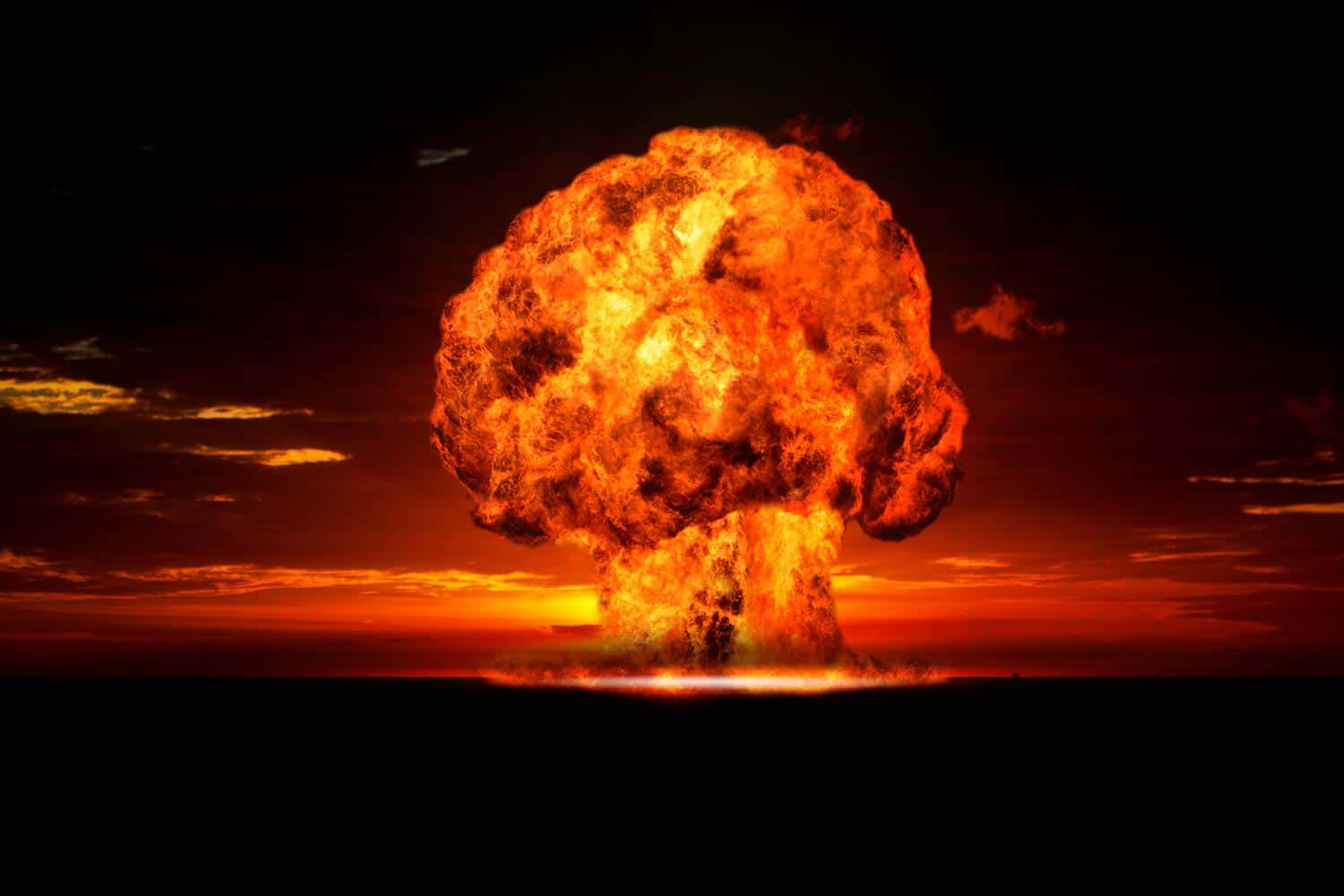 Your Distance From The Detonation Point

One of the biggest factors in surviving a nuclear bomb is the distance from the detonation point. Since the greatest damage occurs within a half-mile radius of that point, being outside of this greatly increases survival chances. Using a basement as a shelter can limit a nuclear bomb's effects even further by being more protected from the radiation wave and air blast. The more dangerous portion is the heatwave, as if it does penetrate through a door or basement window, it could cook everyone inside.

Sheltering in a basement even two miles from the bomb explosion could keep you almost completely safe. Survival would depend on the aftermath of the blast and radioactive fallout rather than the bomb itself. Two miles out would not be affected by the fireball. Being underground would reduce initial radiation and heat effects, and the air blast would be less dangerous underground. Remember to keep a radio in your basement so you can tune in to broadcasts for what to do in the aftermath of a nuclear bomb explosion. 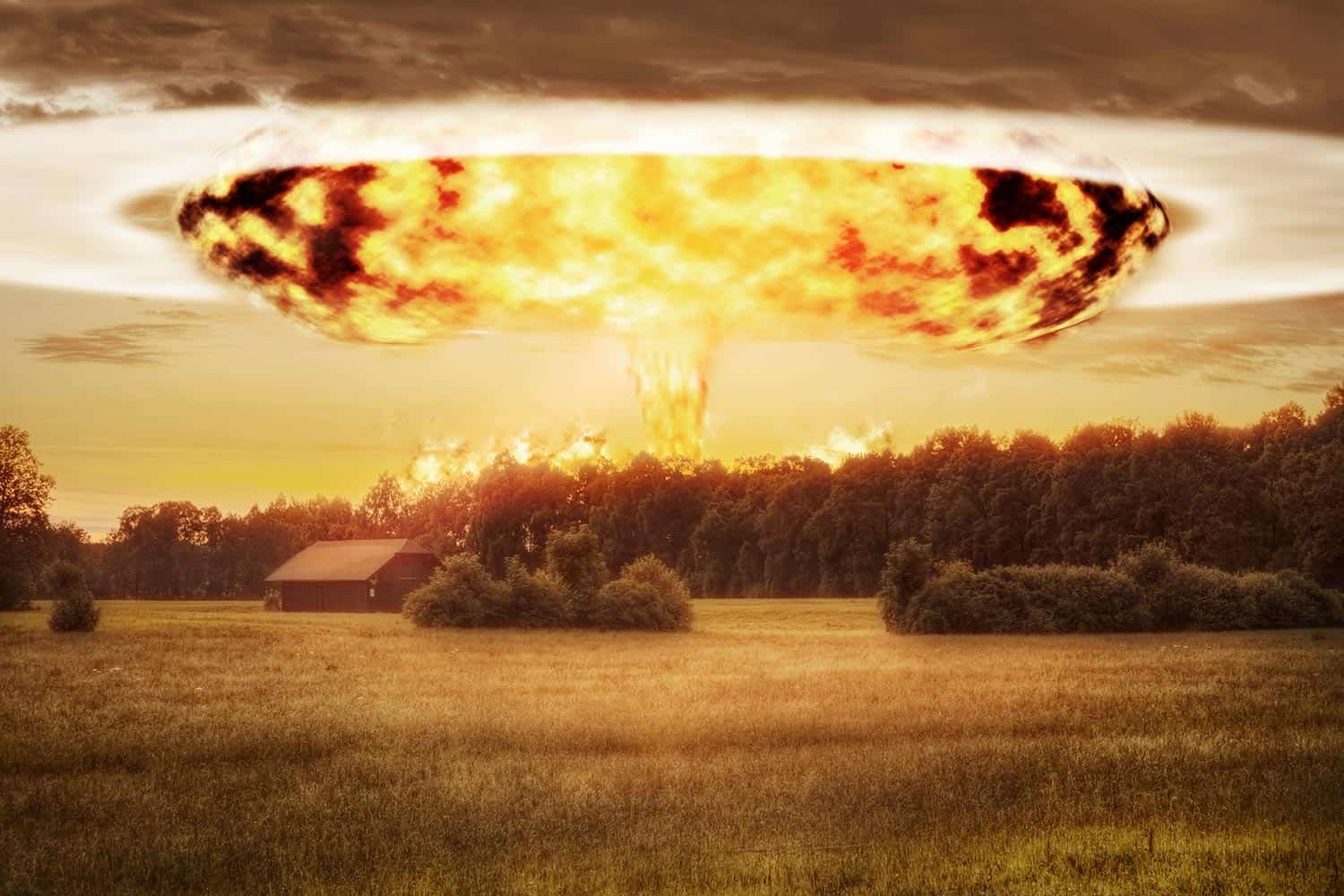 How Far Away From A Nuclear Bomb Is Safe?

Generally, being farther than three miles from the center point of a nuclear blast is safe. The greatest damage will be within a half-mile radius from the center. Most buildings will be completely destroyed at a half-mile, and hazards and radiation will keep anyone from being able to help.

From a half-mile to one-mile out, there is moderate damage. Utility poles will be down, buildings can collapse into rubble if not built to withstand extreme pressures, and people will sustain serious injury.  One-mile to three-miles, there is generally only light damage. The air blast will break windows, but buildings will not be at major risk of collapse, and most injuries to people will be minor even without immediate care.

Outside of this three-mile zone, there won't be too many effects directly after detonation. Nuclear fallout can still be an issue, and glass may still break. However, outside of this range, the waves described previously do not have much of an effect. Being inside of a basement this far out will essentially be completely safe. Remember to listen for instructions on how to proceed in the aftermath of a nuclear explosion to reduce the chance of radiation poisoning.

What Material Can Survive a Nuclear Bomb?

Essentially, nothing can survive a nuclear blast. A direct blast can vaporize anything, including diamonds. Some materials stand up to and block radiation much better than others. These are dense materials like lead and concrete. Less dense materials will allow more radiation to pass through, putting anyone inside the basement at greater danger of radiation poisoning.

While we currently do not have the materials made of the right stuff, experimentation for bomb-proof materials is constantly occurring. Explosive resistant concrete is already available, as is shockwave resistant glass. These would not survive direct hits from a nuclear bomb but would reduce the after-effects felt in the moderate and light damage zones.

There also was a material invented by a man named Maurice Ward in 1990 called Starlite. He claimed it could withstand 1,000 degrees Celsius, be painted onto surfaces, and even survive a direct nuclear blast. Sadly, Mr. Ward passed away without revealing the secrets of Starlite, and it has not been thoroughly tested enough to prove his claims.

Best Materials for a Basement to withstand a nuclear bomb 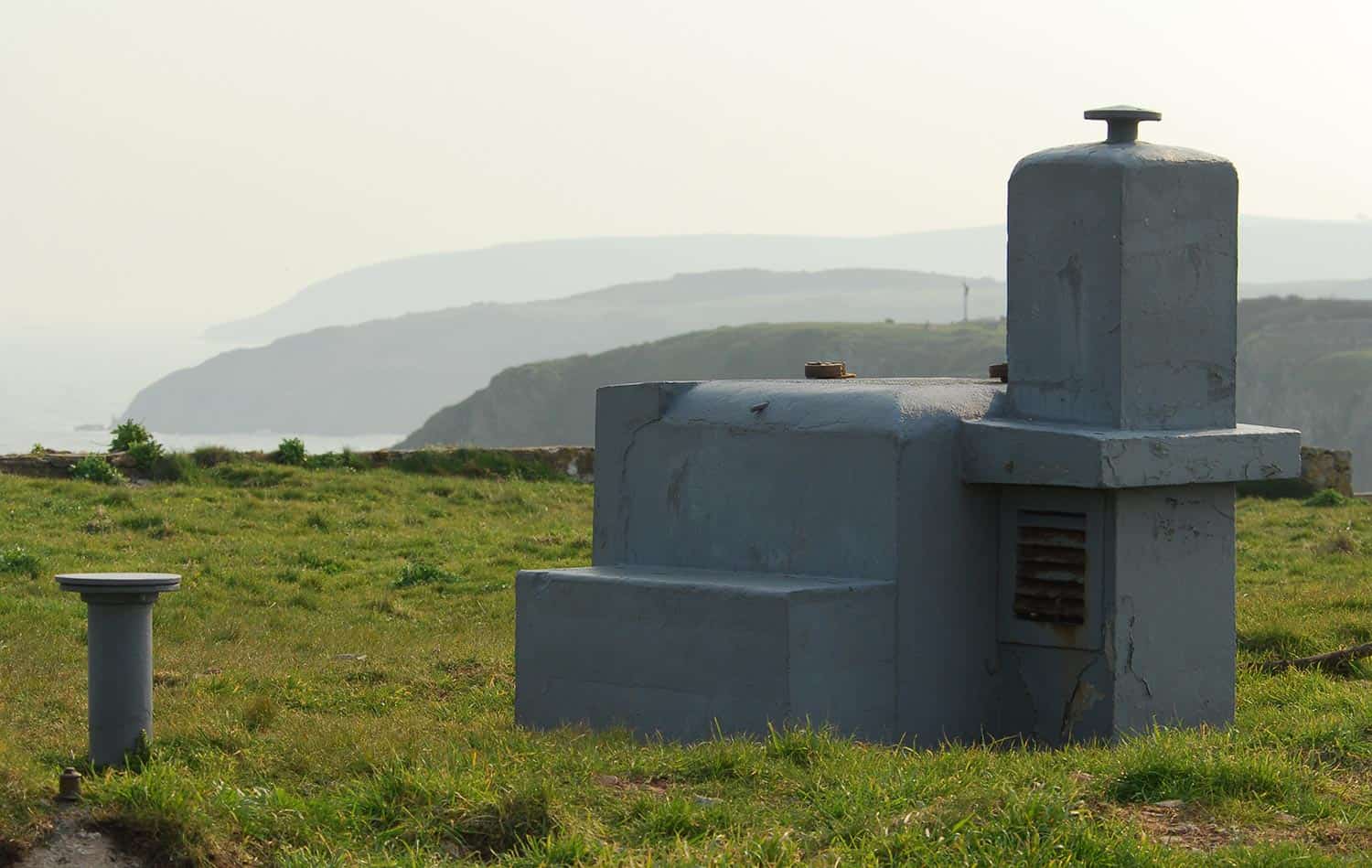 The best materials for a basement to survive a nuclear blast are whatever is strongest. It sounds silly, but the stronger and more reinforced the basement, the better. Steel reinforced roof and rafters will help ensure there is no collapse even if the house above collapses. Concrete walls and even a layer above the ceiling will help reduce the amount of radiation able to penetrate the basement. Metal doors are stronger than wood ones and can't be blown in like a wood door could.

How Deep Does A Bunker Have To Be To Survive A Nuclear Bomb?

To survive a direct nuclear strike, a bunker would have to be over a thousand feet deep. The high yield bombs available today would crush a bunker even at that depth if the strike was direct. If a direct strike hits a bunker entrance, it is unlikely that anyone inside would survive, regardless of depth or type. 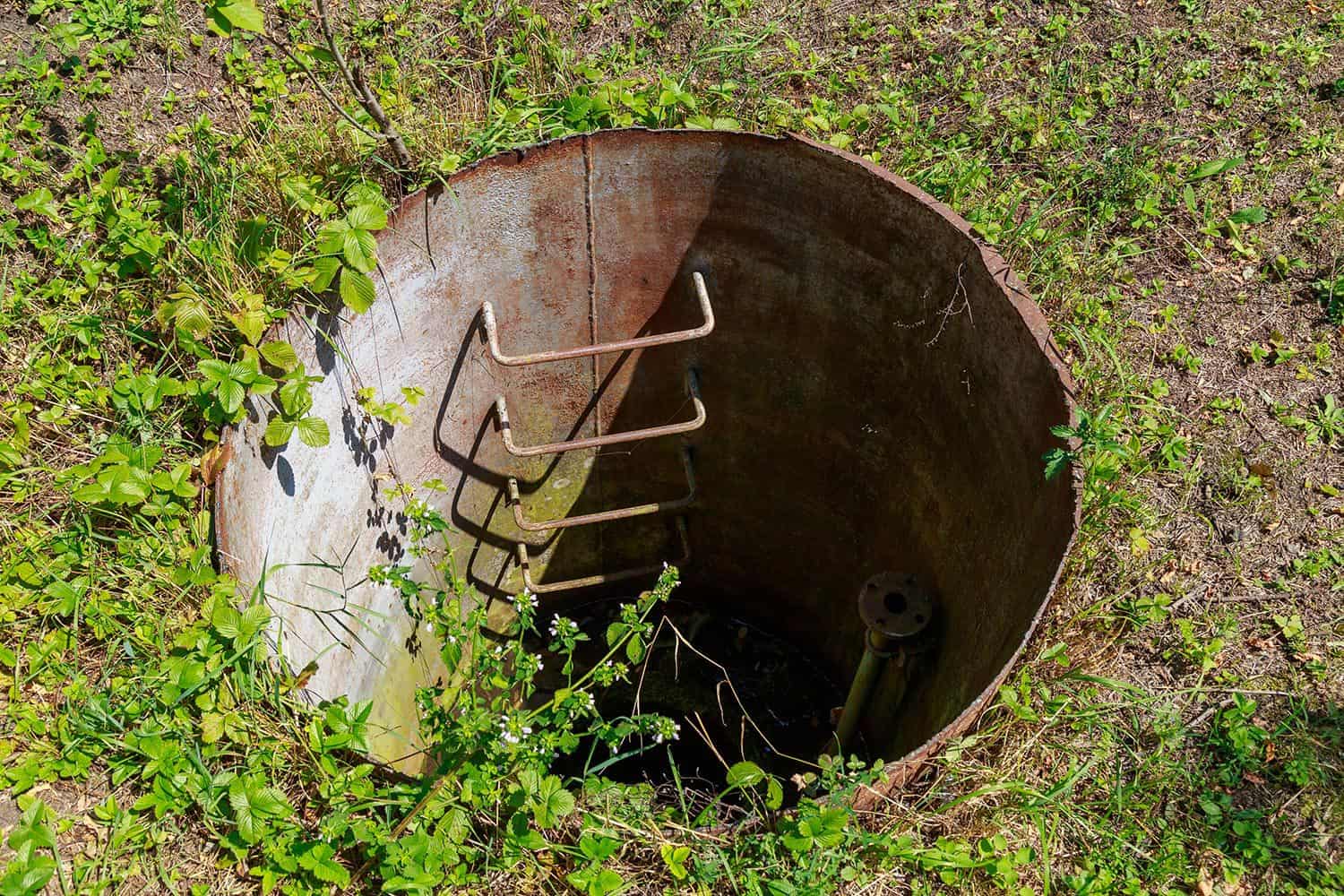 Outside of a direct strike or a super high yield bomb (both very unlikely), a bunker would need to at least buried under three feet of earth. This would likely block enough of the initial radiation to be survivable. As discussed before, being outside of the direct strike zone, much less protection is necessary.

Final Things to Keep In Mind

The likely hood of a nuclear attack is low. This is even more true if you live in a non-coastal or low population area. The best thing to do when facing a nuclear strike is to go inside and stay inside. Tune in for updates by the government on the radio. The aftereffects of a nuclear bomb have the largest radius and are the parts you need to be most concerned about. Remember that direct strikes have very low survivability, but that radius is small.

Can you Survive A Nuclear Bomb by sheltering in a Basement

Yes and no. Surviving a direct hit from a nuclear strike is unlikely; however, the actual area of that damage is quite small, and it is highly likely that going into the basement will allow you to survive a nuclear bomb. After reading this article, you should have a better idea of how a nuclear bomb actually works and the viability of surviving a nuclear bomb in your basement.

If you have other questions about the structural soundness of your home, check out:

Can My Roof Support A Pool?

How Often Does A Landlord Have To Replace Carpet In Florida?

5 Types Of Clamps For All Your DIY Needs

How Strong Is Galvanized Steel Pipe?

Should You Power Wash Your Garage Floor?