If you've seen the crime shows where they scan the room with a black light to look for evidence a suspect might have left behind, you may be wondering what else a black light can show on the carpet. Well, you've come to the right place. We've researched the topic in-depth and have the answer for you.

On carpet, a black light will show:

Now you know what you can see under a black light, but keep reading as we further discuss each item. We will also answer some other questions you might have about black lights and what they might reveal on your carpet. Additionally, we'll go over whether germs, mold, and fungus can be detected using a black light. Let's begin! 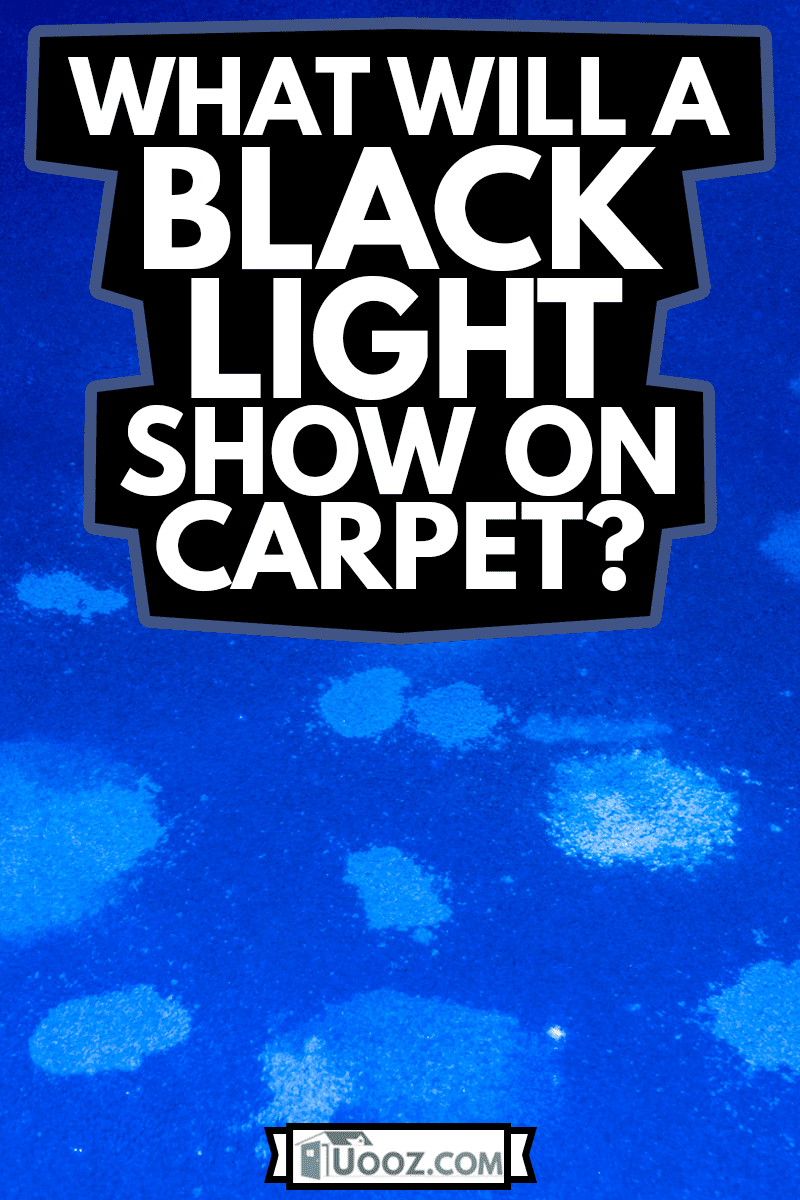 How Does A Black Light Work?

To understand why some things can be seen under a blacklight and why others cannot, you must first understand what a black light is and how it works. Black lights, also known as UV lights, emit ultraviolet light. They come in a range of shapes and sizes, from handheld to wall mounts.

Ultraviolet light falls between visible light and X-rays on the electromagnetic spectrum. Certain substances absorb the light. Once absorbed, they reemit the light making it appear to glow. This is why some things will glow under the blacklight and others won't. They contain a substance that will absorb and remit the light. 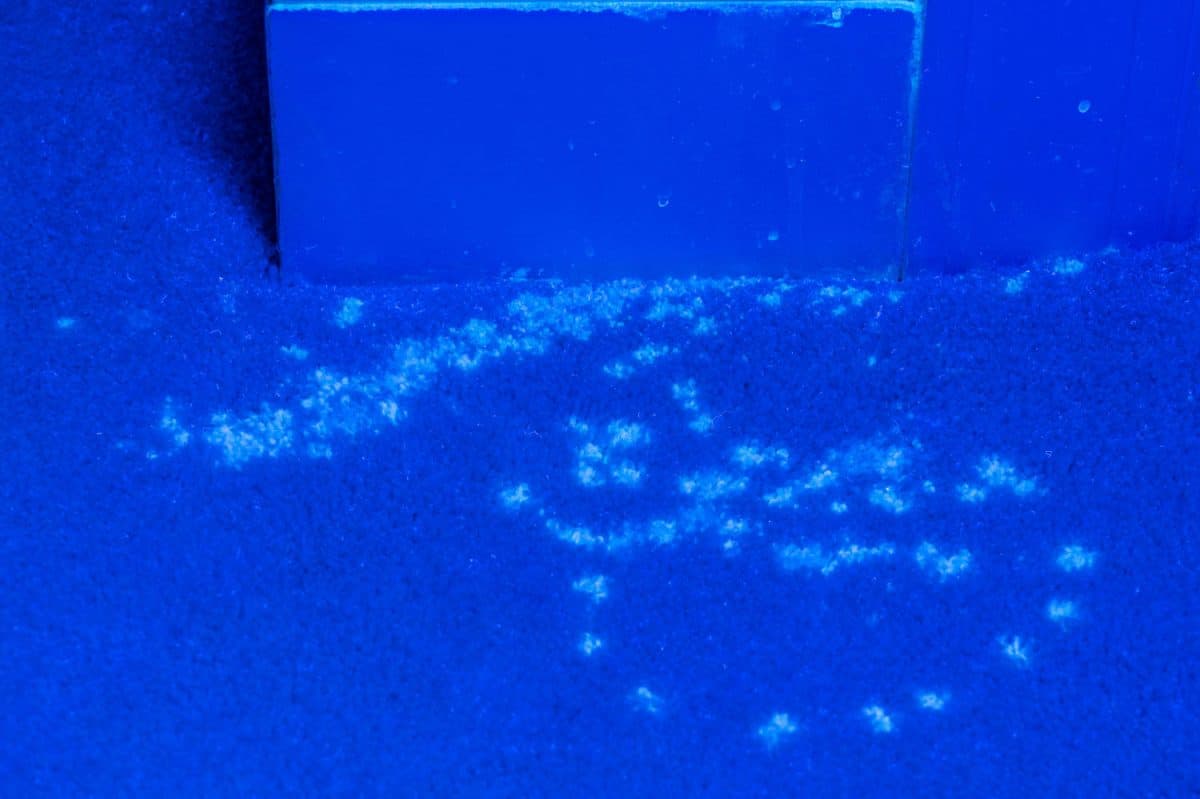 Bodily fluids such as urine, sweat, saliva, semen, and blood will show up under a blacklight directed toward the carpet. These are some of the examples you might have seen during a show such as CSI. Crime scene investigators will use black lights to help locate any DNA evidence they may be able to use in a case.

Let's consider what happens when you sneeze. When you sneeze, saliva and mucus are forced out. So, where are we going with this?

That's right; if you sneeze and then turn on a black light, you can see just how far the sneeze's particles traveled. Pretty gross, right? Although, this is a great way to show younger children the importance of covering your nose and mouth when you sneeze.

Blood and semen are typically what crime scene investigators look for when they canvas a room with a black light. Blood will show up black unless the area is first treated with luminol. Because of its chemical makeup, semen will shine brighter than most bodily fluids.

However, without further testing, there's no way to know whether the glow is semen just from looking at it.

You may know that sometimes stains can be removed from a carpet using laundry detergent. After all, it is designed to be used on fabrics. Well, if you've tried cleaning your carpet with detergent at any point, this can also show up under a black light. However, not all types and brands of laundry detergent will show up.

Why some but not others?

For the detergent to appear under blacklight, it must contain phosphors or fluorescent dye. They are often added to detergents to make whites appear brighter. Tide laundry detergent is one example of a detergent that contains them.

So what are phosphors? Phosphors are one of the substances we mentioned earlier that will light up when exposed to UV lights.

Fun side note: Tide laundry detergent paired with a black light can be used to create spooky messages on the wall for a Halloween party! The detergent will glow blue under a black light.

Does carpet cleaner show up under black light?

You may still be able to see the stain when you shine a black light on it. This doesn't mean the cleaner didn't work or the cleaner is now what you're seeing. Instead, it's a remnant of phosphorus from the previous stain. 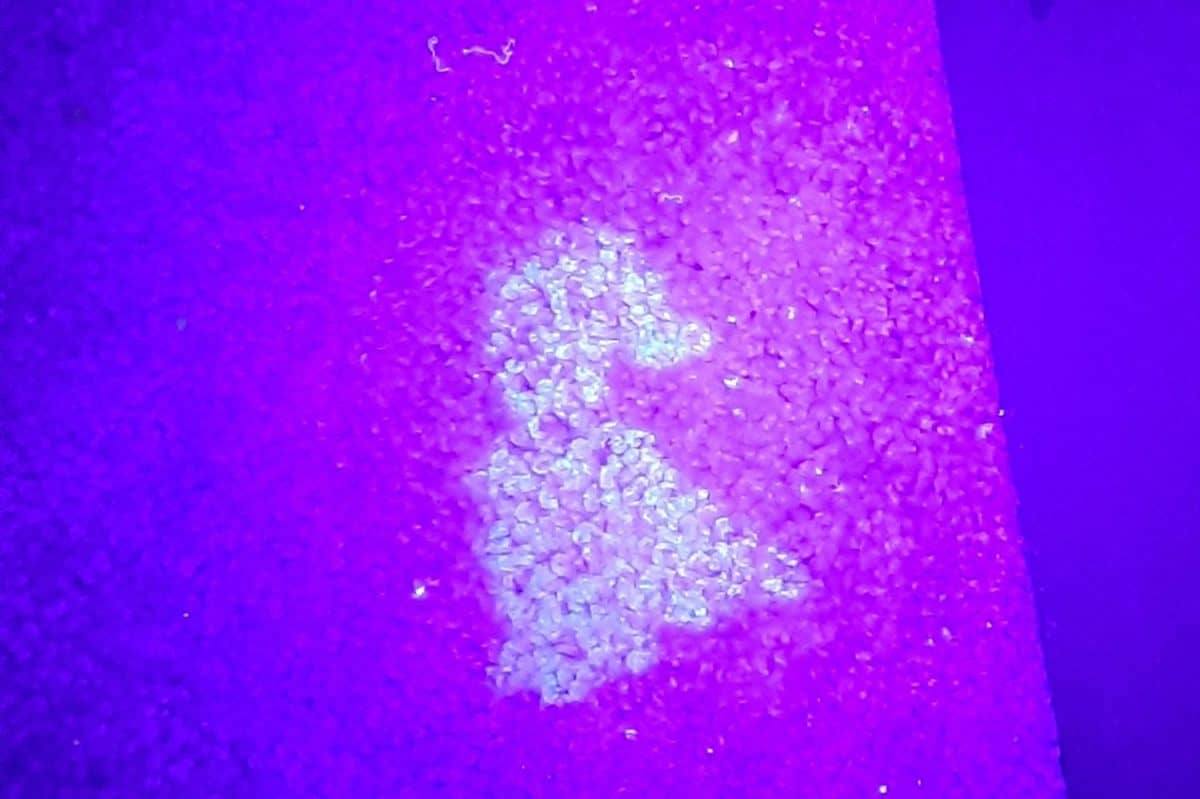 Animal urine will show up under a black light, which is great for identifying any stains you might have missed when cleaning up after your pets. This is especially helpful if you can smell urine but can't locate the exact location of it. Using a black light will help save your nose from having to sniff every area of the carpet.

Why does the area my pet peed still glow after I cleaned it?

Even after cleaning the urine, you might still be able to see the spot that it was in when you use your black light. Animal urine contains phosphors as well. As we mentioned previously, phosphors can be hard to remove.

This is why backlights are used during crime scene investigations. Despite people's best efforts to clean up, there's usually some remnant. Even so, the stain should glow more faintly after it is cleaned.

If you shine your black light on your carpet and you are mortified by the number of specs that appear, don't assume it's all bad. Lint, especially lint washed using a detergent with phosphors, will also appear under a black light. Try vacuuming the area and then shine the black light again. The vacuuming should remove some of the lint.

Just like lint, sometimes dust will show up under a black light. Dust isn't quite as likely to show up as lint, though. so if there does seem to be a lot of specs on the carpet, direct your attention to the possibility it is lint rather than dust.

Mold is often pretty visible without a black light. It often appears as a dark, discolored area on a carpet. However, if there's no visible stain and you still suspect mold, a black light can be used to check the site.

What color is mold under black light?

While it's often black, brown, or green when not under a black light, mold appears bright yellow when exposed to UV light. It is important to remember that mold isn't the only substance that glows yellow under a blacklight. Because of this, you should check for other signs, such as moisture, that the area is contaminated with mold.

Mold is a type of fungus and will show up as a yellow glow under a black light. Just like mold, other types of fungi will also glow.  Blacklights can be used to diagnose fungal infections such as ringworm in both humans and animals. Because of this, vets and doctors will often have access to black lights in their offices.

Can you see bed bugs with blacklight?

Bed bugs will run and hide from regular light, but can you find them with a black light? Well, the answer is yes and no. While bed bugs have phosphors in their exoskeletons, they are still hard to detect with a black light.

However, you can use the light to look for trails that might reveal where they are hiding. After all, bedbugs feed on blood, which is one of the bodily fluids a black light will detect.

Blacklight can not detect germs. So, if you're wondering whether you can check for any chance you might catch a cold from a surface. Unfortunately, you are out of luck.

However, as we mentioned earlier, it can be used to show how germs can spread through bodily fluids such as a sneeze.

There's a product called Glo Germ, which is used to train people in proper handwashing techniques. It is applied like lotion, and then the trainee is instructed to wash their hands. Under a black light, any remaining product that wasn't washed off will be visible. 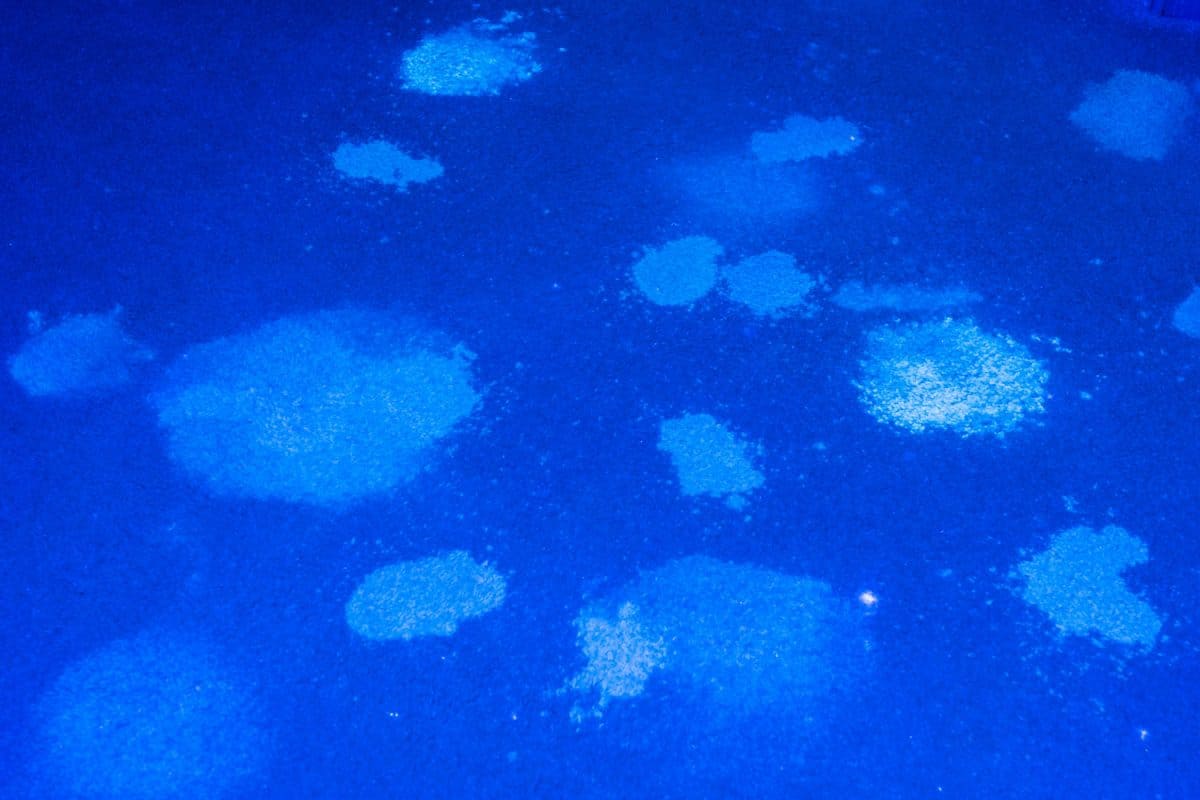 Hopefully, our article has been informational about what you can and can't see on a carpet under a blacklight. Whether you're trying to identify pet stains, bodily fluids, or detergent, a black light can help.

Just remember that if you can still see the stain after cleaning, it's likely just remnants of phosphors and not the substance that caused the stains.

For more reading on some of the topics we mentioned in this article, check out some of our other blog posts:

Can Bed Bugs Hide In Or Under Hardwood Flooring?

Does A Floor Steamer Clean Carpets?

How To Insulate Around Pellet Stove Pipe

How To Install Tile On A Shower Ceiling? [14 Steps]

How To Get Thinset Out Of Grout Lines

Do You Need Guttering On A Porch?

Deck Shakes When Walked On – What To Do?