Figuring out how to properly install a shower can be quite a challenging task. Are you thinking of tiling under your shower's base but don't know whether that is a good idea? Don't fret; we've looked into this to provide you with a comprehensive answer.

You should not tile underneath the base of a shower. Tile won't always be even, which can affect your shower's installation and lead to a costly repair. Grout is also not waterproof, so having tile under your shower base can become a breeding ground for mold and mildew.

As we begin, we will cover all things shower installations. Whether you want to take on a project yourself or need to get a plan together, we've got you covered. With that said, let's get right into this post! 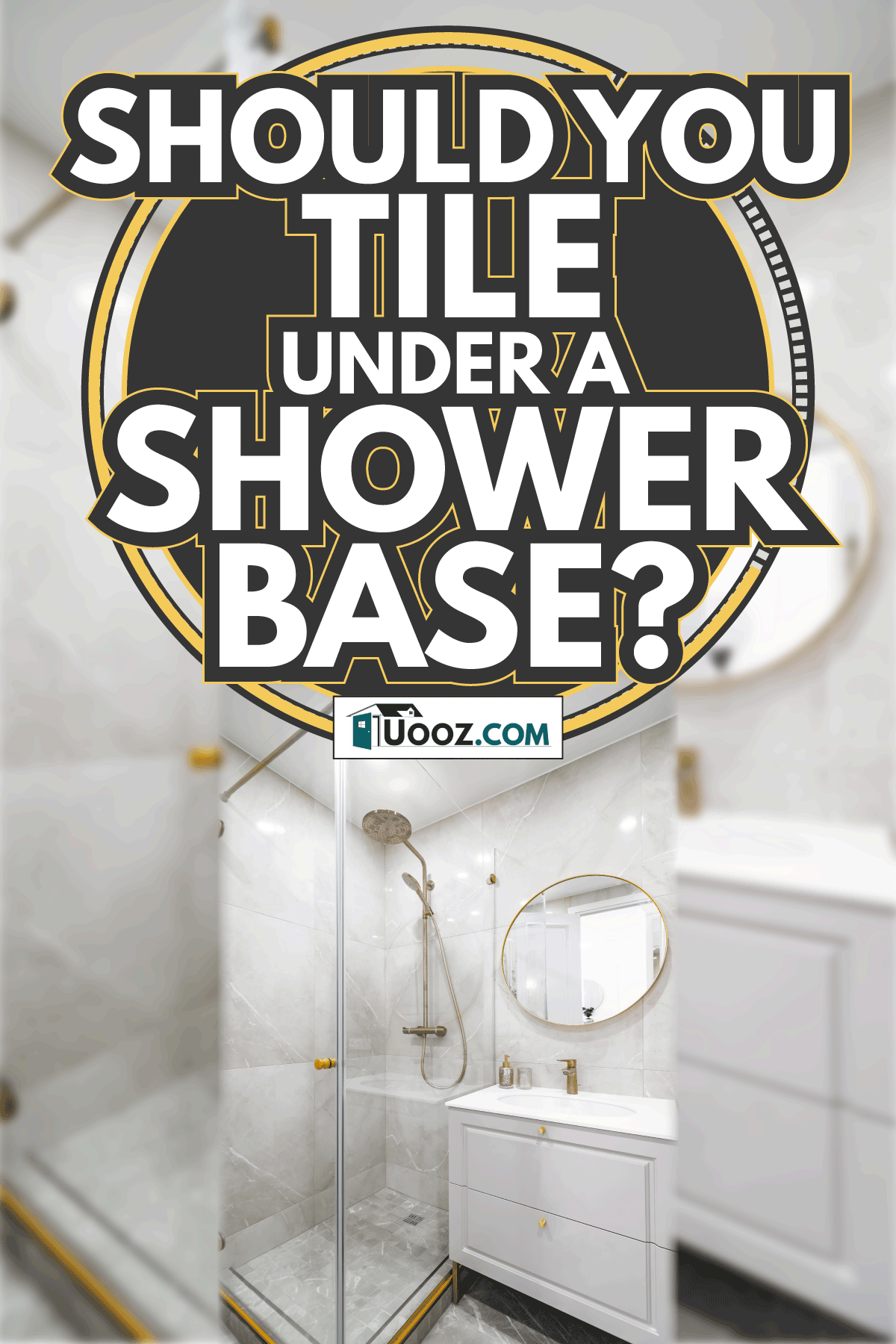 What Do You Put Under A Shower Base?

Typically, you want to use mortar underneath the base of your shower. Mortar essentially creates a smooth surface that prevents your shower's pan from slipping or cracking due to uneven flooring.

Even if your floor is level, mortar works to move excess water and is one of the sturdier options you can use for this type of project. 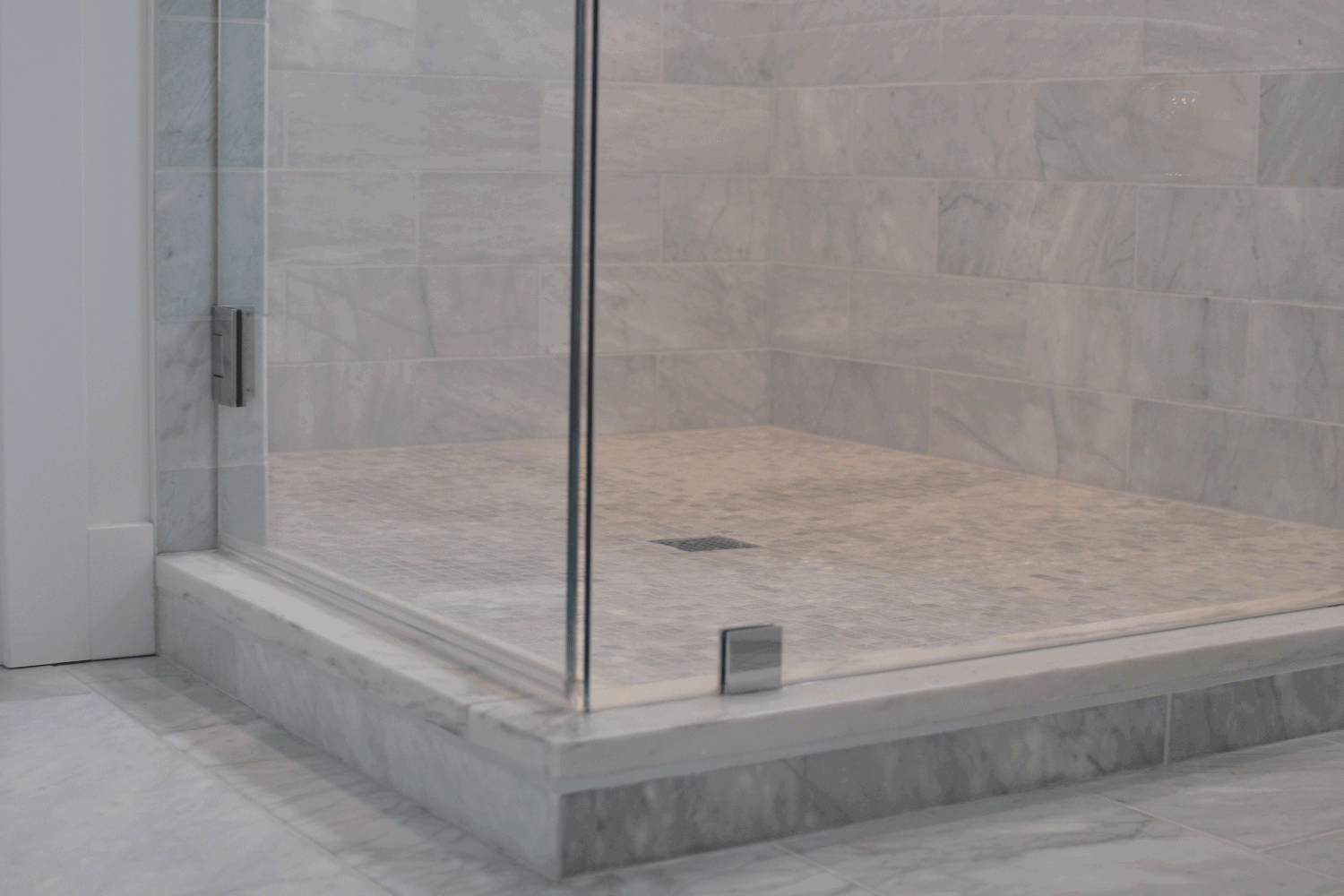 Do You Need To Waterproof Under A Shower Base?

When it comes to waterproofing under the base of your shower, we do find this necessary. Especially for acrylic shower bases, it is essential to waterproof between your shower and subfloor to prevent leaking and structural damage later on.

It is a good idea to buy a waterproof liner to put between your shower base and subfloor, as well as a wall kit to prevent leaks from above.

Follow this link to see it on Amazon here.

What Type Of Shower Base Is Best?

In general, we would recommend using either an acrylic or fiberglass base for your shower. Between the two, acrylic will be more durable and won't crack or scratch as easily as a fiberglass base will.

According to DuraCare Baths, acrylic shower bases handle heat better than other options and won't experience corrosion. On the other hand, fiberglass bases tend to cost less than acrylic but aren't as durable and cannot handle extremely high temperatures.

How Long Will An Acrylic Shower Base Last?

Typically, you can expect an acrylic shower base to last you between five and ten years. Of course, this number varies depending on how well your base is made, but in general, it should last you at least five years before showing signs of needing replacement.

That said, acrylic shower pans/bases are highly durable and usually come with a lifetime guarantee, so keep an eye out for that while shopping.

This shower base has a non-porous acrylic surface, a high gloss finish, a left drain hookup, and comes with a ten-year limited warranty.

View this acrylic base on Amazon here.

Can You Tile The Bottom Of A Shower Pan? 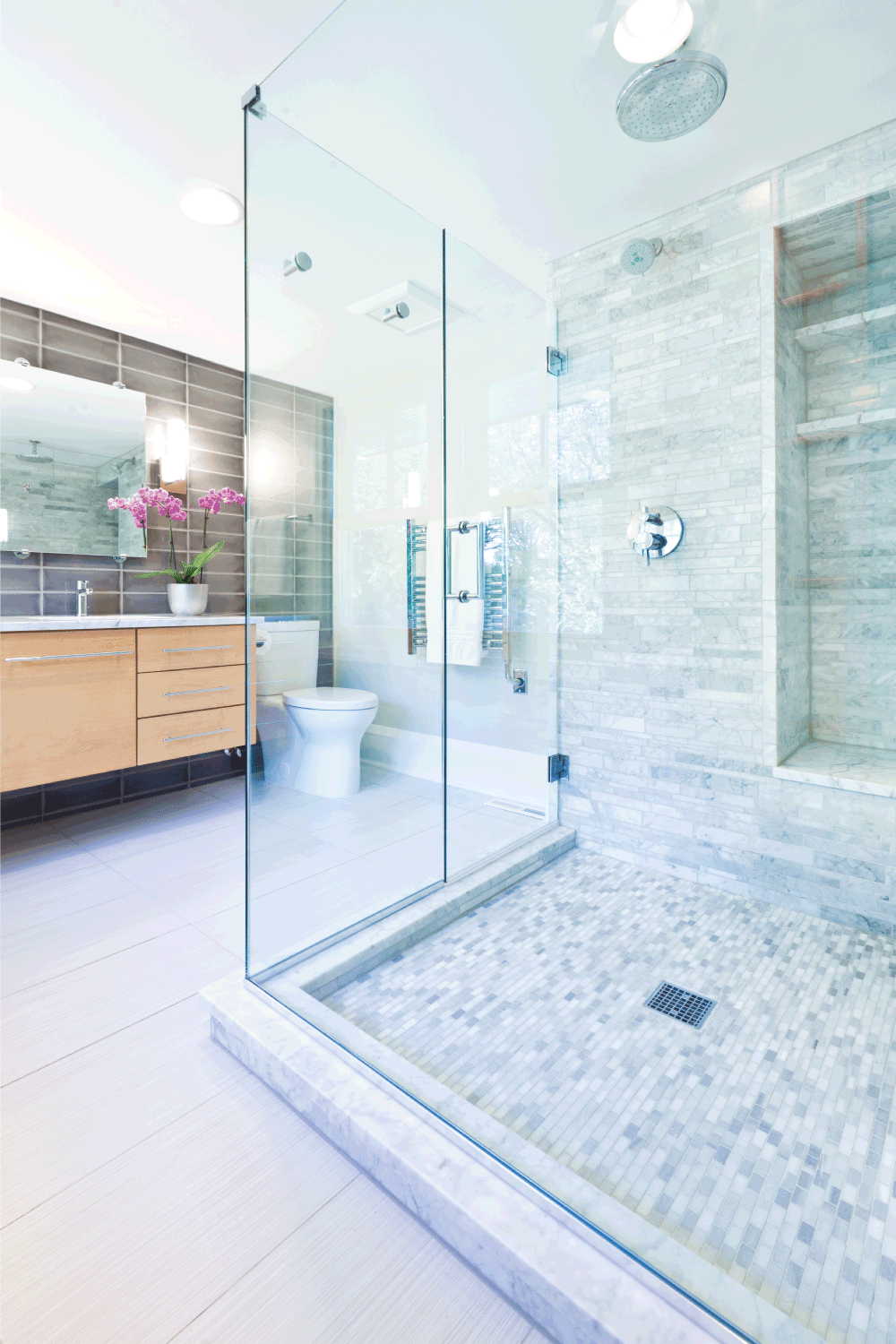 It is doable to tile the bottom of a shower pan. As long as your pan has a tile-over design, you should be okay to tile on top of its base.

With that said, you can't add tile to the bottom of acrylic, fiberglass, or synthetic pans, so this might not be the best option for your shower. Of course, if you don't mind spending a bit more money for your shower and prefer the look of tile, go for it.

Is A Shower Pan Or Tile Better?

Generally, sticking with a pre-made acrylic or fiberglass shower pan is a better option than tile. Price-wise, using a pan will cost much less than paying for a tile installation and won't require as much labor.

Tile also requires more upkeep than a pre-built shower pan and isn't always easy to clean. Of course, this does come down to your design vision, but we would recommend using a shower pan over tile.

Although both a shower base and pan move water into the drain, they aren't the same thing. Most importantly, your shower base is the section just above your subfloor, while the pan is what we see and stand on while showering.

Think of this as your shower's layers, with its base being more for foundational purposes and its pan being the decorative top layer we all get to see.

Does A Shower Need A Shower Pan?

Yes, a show needs a shower pan. According to Jon Wayne Service Company, installing a shower pan is essential for either tile or plain showers to protect your subfloor from water damage.

Like we covered earlier, tile grout is not waterproof, so adding a pan above your shower's base is very important to keep the foundation of your shower in good shape.

What Is The Proper Slope For A Shower Floor? 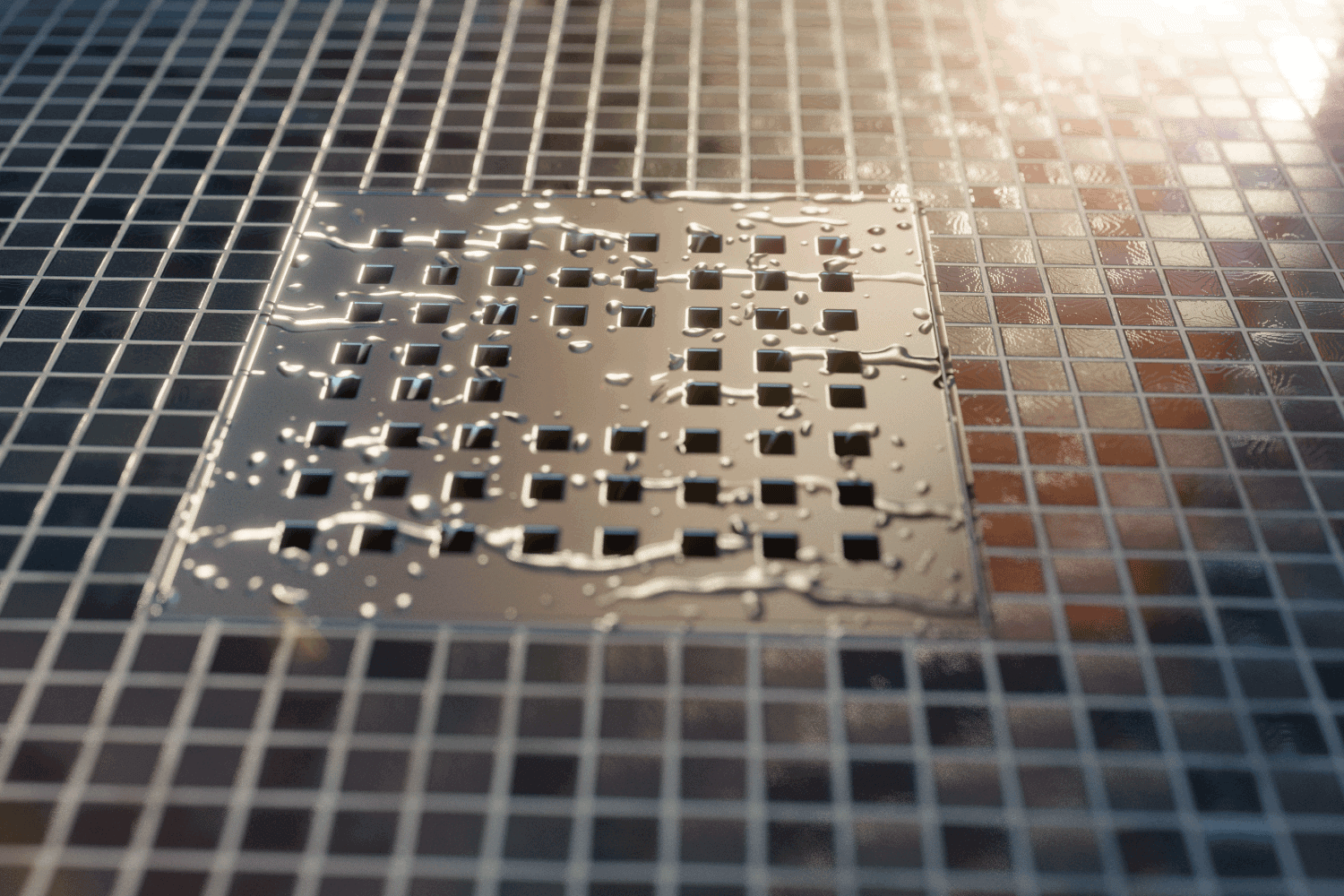 Ideally, your shower floor should have a slope of 4% or a 1/2-inch drop for every foot from your shower walls to its drain. According to the CTIOA, a shower floor needs to have at least a 1/4-inch slope per foot to the weep holes of its drain, so make sure to keep that guideline in mind.

For a tile shower, its slope is usually established in its mortar foundation, while acrylic bases will usually have one built-in. That said, not all pre-made shower bases include a slope, so make sure to check with your contractor/manufacturer before installing.

This shower slope and drain kit come with six quick pitch sticks, a universal center ring, a weep hole protector, gives your floor a 1/4-inch slope, and promises not to rot/deteriorate.

How Do You Level A Floor For A Shower Base?

It is relatively easy to level a floor for a shower base. To start: 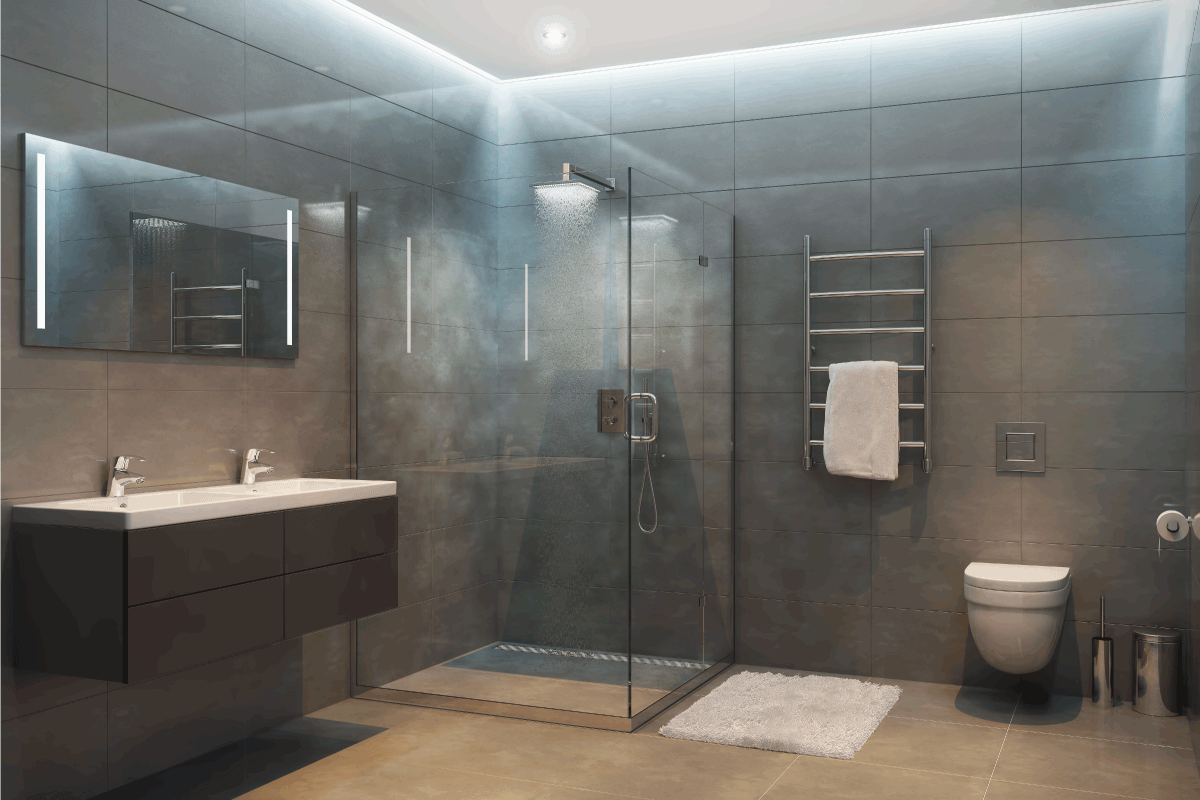 To Wrap It Up

Whether you want to renovate or plan your new shower in your home, figuring out the right way to install a shower is important. You should avoid tiling under a shower base and instead use mortar to protect your subfloor.

When it comes to what type of shower base is best, we recommend using an acrylic option because of its durability and heat resistance. We would recommend using an in-tile pan for those who love tile flooring, although we think a pre-made acrylic or fiberglass option will be cheaper to install. Regardless, make sure to level your shower's subfloor before installing its base, and don't forget to look for a pan with a lifetime warranty.

Need more guidance on showers? Check out these helpful home posts below!

Should You Tile The Floor Or Walls First In A Shower?

Where Should The Drain Be Placed In A Shower?

How To Remove WD-40 From Metal

How To Get Thinset Out Of Grout Lines

PEX Sharkbite Vs. Crimp – How Do They Compare?

How To Load A Dewalt Staple Gun [Quickly & Easily]