The lock pin of your Ryobi miter saw refuses to budge. This can be every woodworker's nightmare. Worry no more! Luckily, we researched so you can solve the problem much easier.

You can unlock the Ryobi miter saw by following these steps:

When the lock pin of your Ryobi miter saw gets stuck, apply a penetrating fluid to loosen the pin. Then push the saw arm down to lessen the pressure on the pin. Let the penetrant sit for a few minutes, then the lock pin should come out easily.

The lock pin of the Ryobi miter saw is a crucial element in operating the machine safely. In this post, we will discuss the steps to unlock your pin and why applying a penetrating fluid is the best remedy when the pin gets stuck. The underlying causes of the stuck locks and other relevant information are also discussed. Keep reading!

How To Unlock A Ryobi Miter Saw

Ryobi is a well-known brand for power tools such as the miter saw. One of its significant features is the lock mechanism which makes it at par in portability. You can easily set it up and take it down after, making it convenient to transport and store. 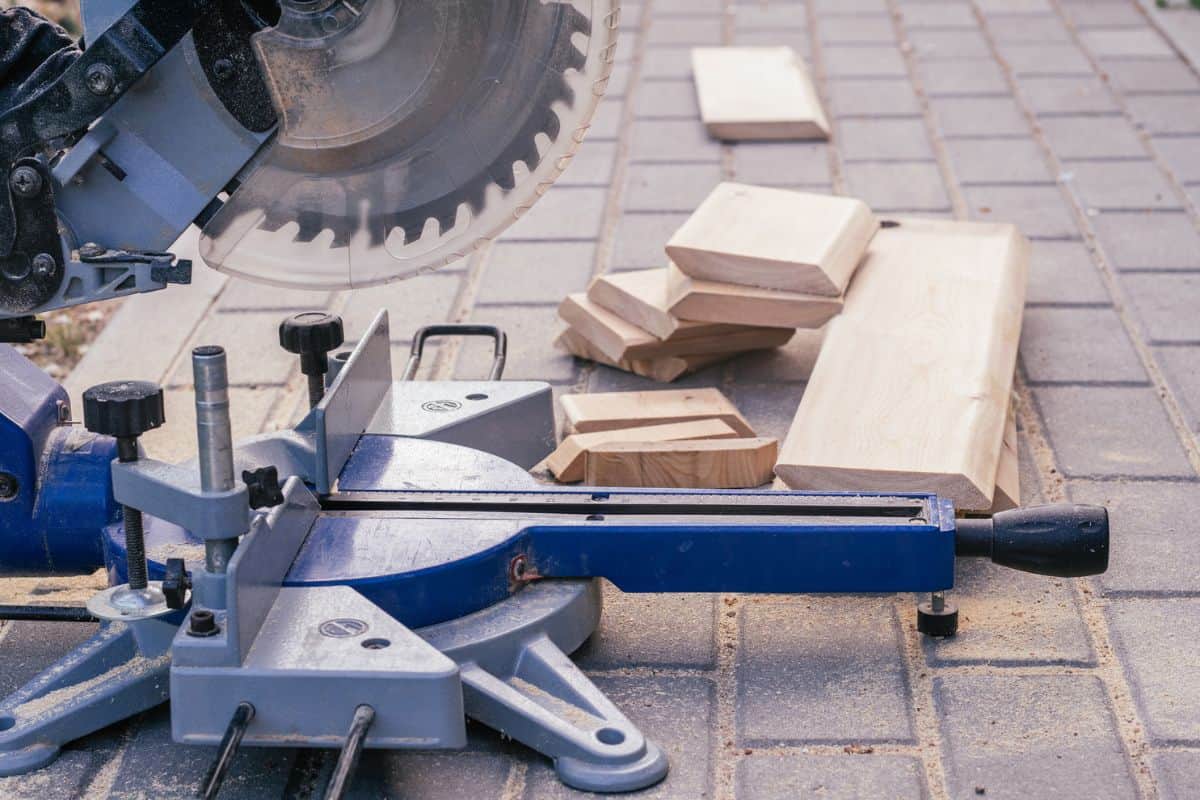 When transporting, the saw arm can be folded by pushing it down to a locked position. When you are ready to use the machine, you can unlock it by pushing down the saw arm so that you can pull the lock pin.

Listed below is a step-by-step guide:

Step 1: Position securely the Ryobi miter saw on a flat and stable surface. 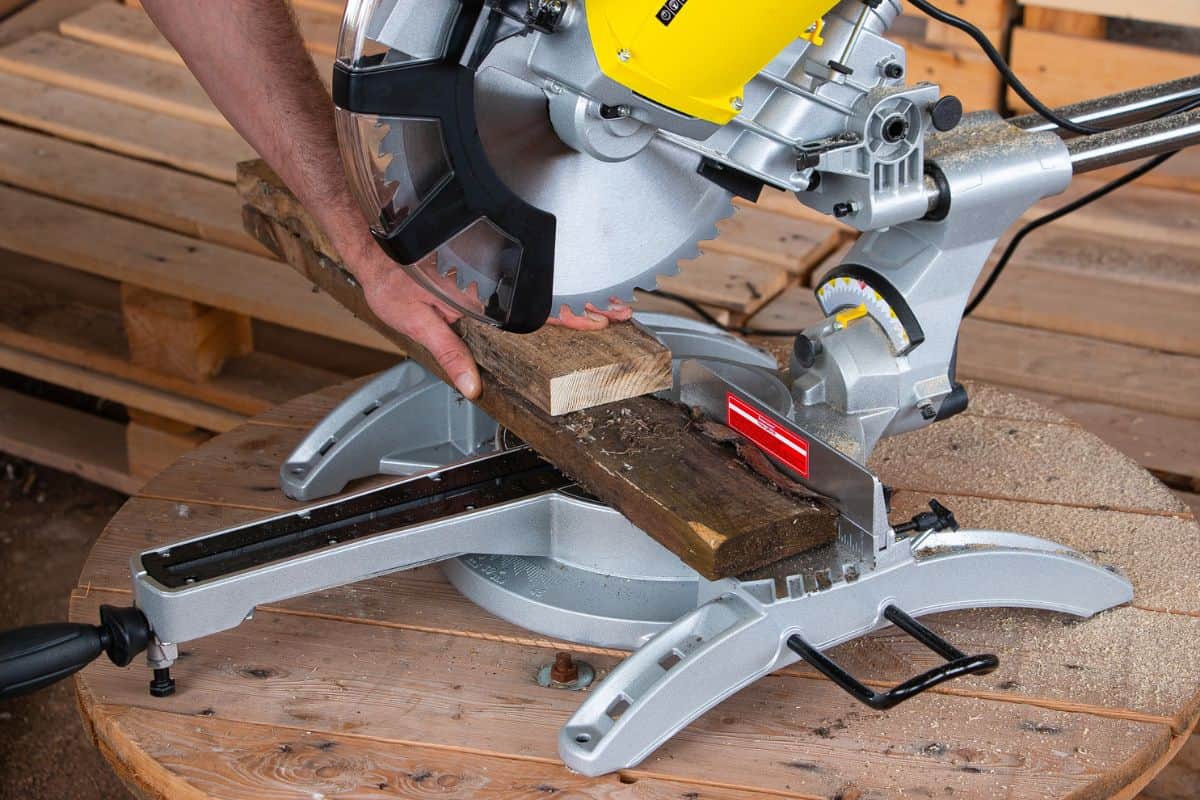 For a more secure and stable working area, you can opt for a miter stand with mounting brackets for your machine. Not only does this protect your machine, but also you and other people working with you. This safety device can protect against workplace accidents.

Check out this Ryobi miter stand on Amazon.

Step2: Hold the lock pin, which you can locate above the main pivot joint. It is the small and cylindrical button on the right side of the saw arm.

Step 3: Press the saw arm so the pivot joint at the rear moves freely from its locked position.

Step 4: Push the lock pin outward from the machine's body.

Step 5: Release the saw arm to let it rise to its maximum height.

Step 6: Release the pin and the saw arm is unlocked, ready for cutting.

What To Do On Stuck Lock Pin

The steps outlined above reflect a successful operation of your miter saw by unlocking the pin. Unfortunately, if you can’t release the lock pin smoothly as it should, chances are it's stuck, and there’s an obstacle to letting it budge out. The remedy is to apply penetrating fluid to loosen the pin.

Here are the steps:

What Not To Do On Stuck Lock Pin

A stuck lock pin can be annoying and frustrating. It can put your work on hold, delaying your project timelines. For some DIYers, especially novices or those who are less knowledgeable, it is not uncommon that they may resort to unfavorable means to solve the problem.

Here are some pointers on what should not be done on a stuck lock pin:

Resorting to the above means is fraught and can cause irreversible damage to the lock pin and other mechanical parts. At worst, it will even cause a malfunction of the miter saw.

Why Is A Lock Pin Important For The Ryobi Miter Saw?

The locking mechanism of the Ryobi miter saw makes it a superior brand in terms of portability and convenient storage.

Here is how lock pin helps you use the miter saw safely and accurately:

What Causes A Stuck Lock Pin On the Ryobi Miter Saw?

There are several probable causes why the lock pin gets stuck:

Corrosion due to oxidation is the common culprit when the lock pin cannot be released smoothly. The constant pulling and pushing of the pin cause the metal surface to wear off. Over time, the wear and tear causes rust to develop.

Rust oftens forms when the pin is tightened in a locked position, which making pushing and releasing the pin a bit challenging. The rust at the sides of the pin hinders a smooth slide out from its hole. 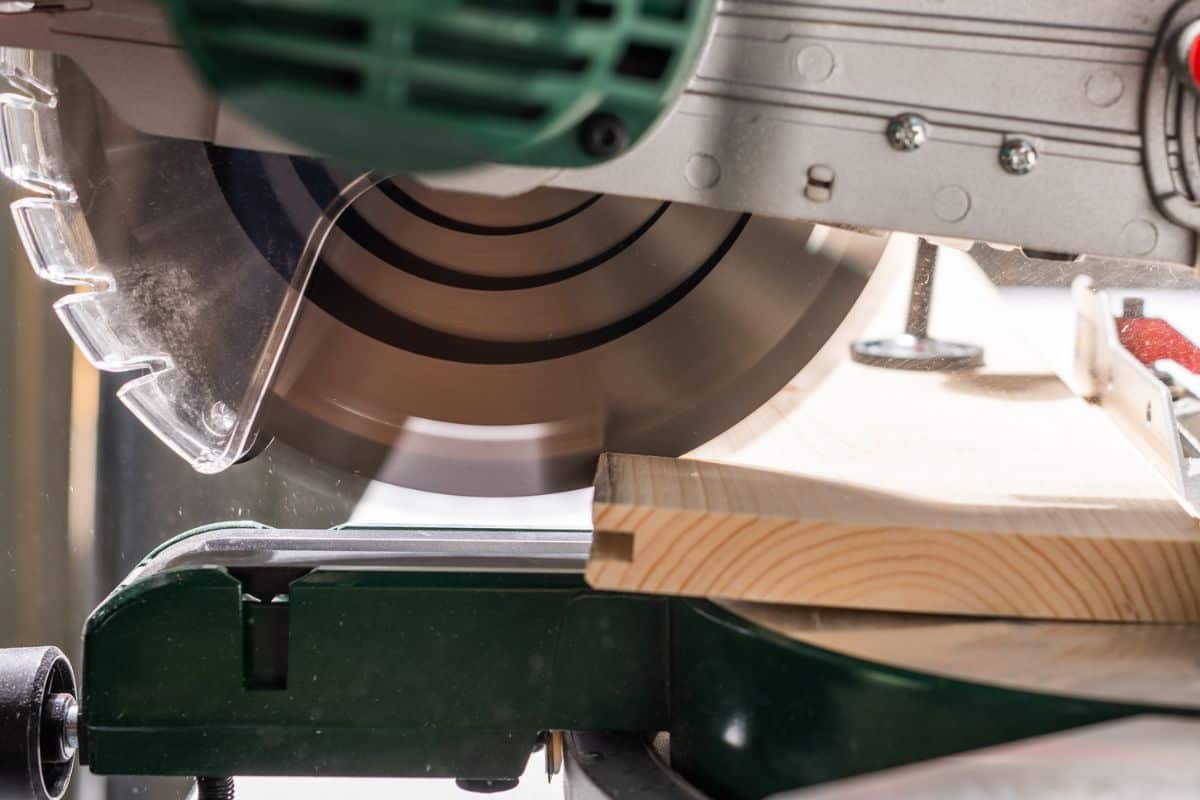 In any woodworking project, sawdust is a common residue. Miter saws are often locked in a hurry once a task is done, and dusting off loose dust and debris on the machine's surface can be overlooked in your rust. These debris may get through the crevices and holes of the mite saw and cause your lock pin to get stuck.

To aid you in this problem, you can minimize airborne sawdust in your work area by getting a dust chute as an accessory to your miter saw.

Check out this Ryobi sawdust chute on Amazon.

In colder regions or where the air temperature is low, oxidation is more rapid. These temperatures hasten the corrosion of metals, including the lock pin.

The lock pin design has a rubber head that gives a non-slip grip in pulling and pushing the pin.  If it gets detached, the lock pin is pushed inward, which makes it stuck, though this is a rare malfunction.

When the rubber head is detached, try to consistently push and pull the saw. This can get the pin to push outward. If this method fails, you need to partially disassemble the saw to expose the pin, and then push it outward.

How Does Penetrating Fluid Work On A Stuck Lock Pin 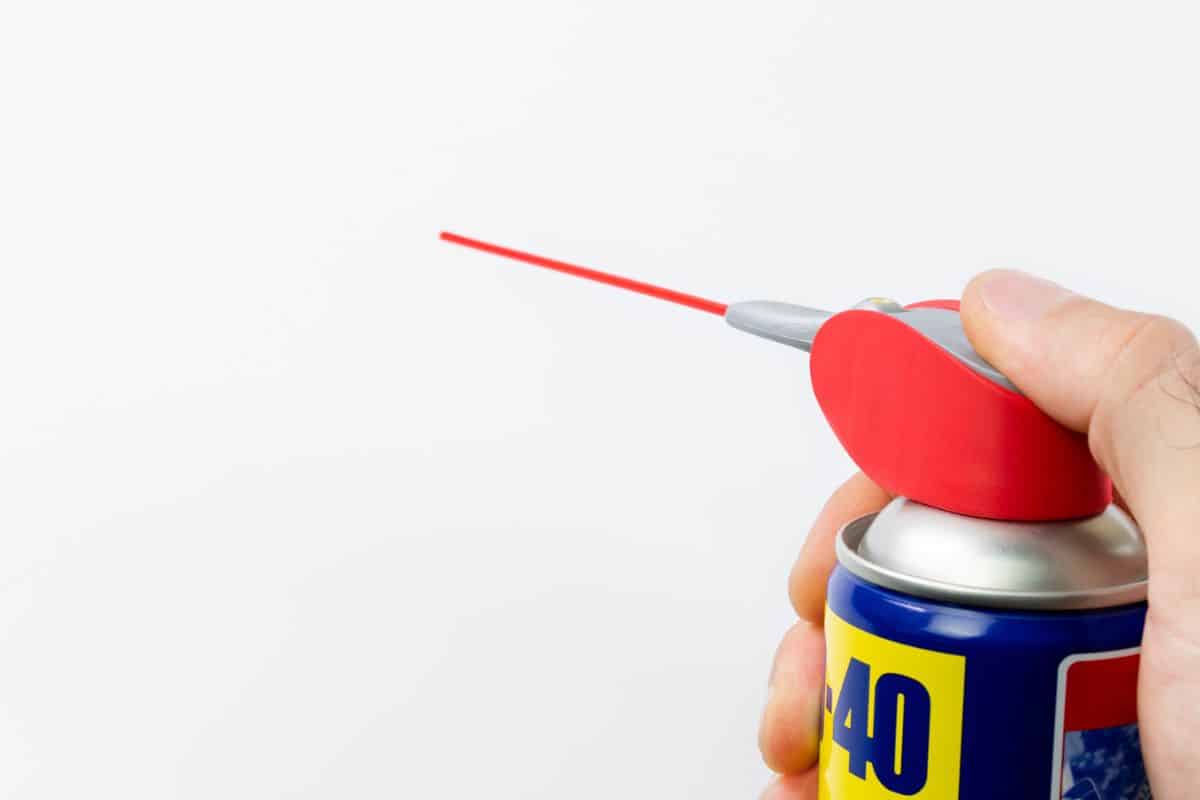 Applying penetrating fluid is a viable solution to the problem of a stuck lock pin. Here’s how it works:

What are the Limitations of Penetrating Fluid

Like any product, penetrating fluids have their share of limitations too. They are often mistakenly used as lubricants and defense against corrosion.

Sadly, penetrating fluids provide lubrication only for a short duration. The oil additive is a volatile solvent and is easily contaminated. This is why when it evaporates, a residual film develops at the pin surface. However, this film layer will also wear out quickly compared to dedicated lubricants like grease.

Therefore, due to these properties of penetrants, they should not be used as a permanent solution in lubrication. They cannot be considered a total replacement for lubricants. They only serve as an interim or short-term solution to remedy the frictionless lock pin.

What Are The Recommended Penetrating Fluids?

Penetrating fluids are readily available at hardware, DIY stores, and other commercial establishments. You can also purchase them online. Here are the recommended brands to use for stuck lock pins:

Check out this product on Amazon.

Liquid Wrench penetrating oil is sought after for a stuck lock pin. It acts fast against corrosion and rust.

Check out this product on Amazon.

WD-40 penetrant spray contains elements specifically to loosen rust. It is economical since it has a wider application for many surfaces. 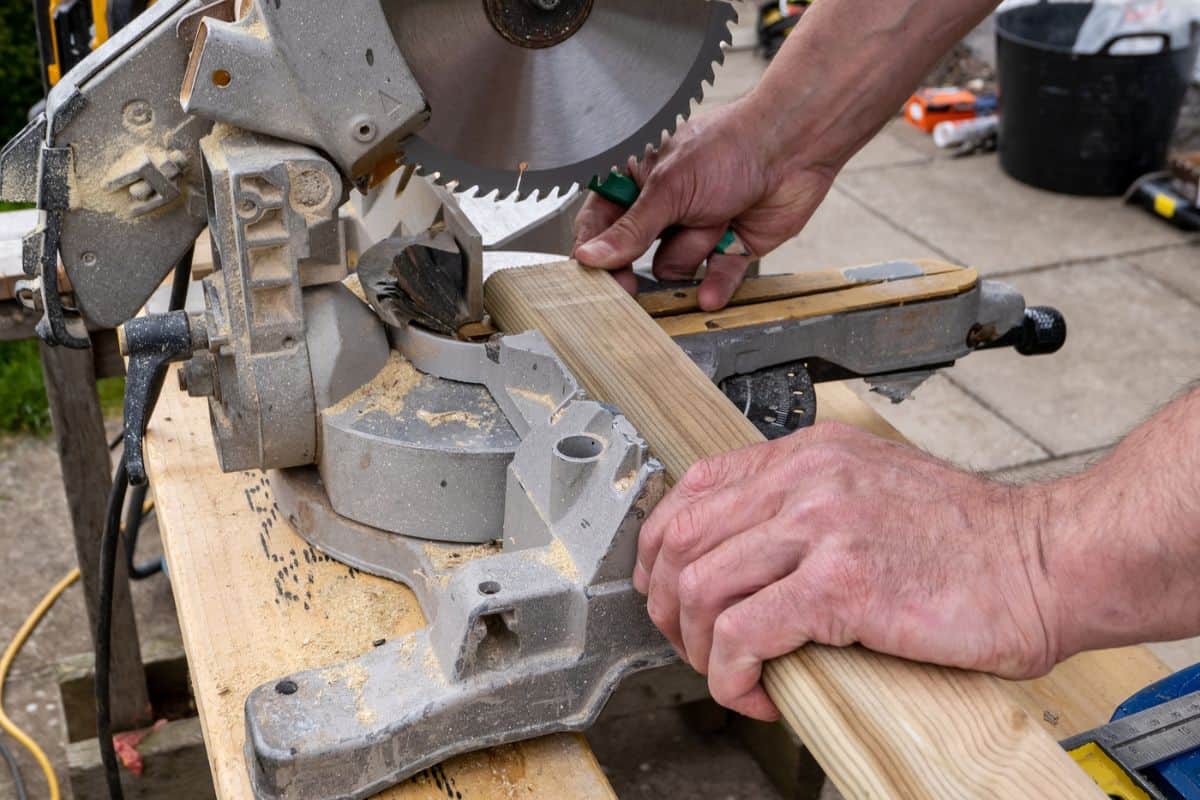 The Ryobi miter saw is one power tool that gives carpentry a professional touch. It also affords convenience in portability and storage with its lock mechanism. To prepare the miter saw for use, you need to unlock the saw arm.

A lock pin secures the saw arm during transport. You can release the lock by pulling it, and the saw arm will rise by itself, ready for cutting.

However, in the few instances where this lock pin gets stuck, applying penetrating fluid is the most effective remedy.

We have other posts on power tools that might interest you:

Does Craftsman Warranty Its Power Tools?

Stihl Rotary Saw Not Starting - What To Do?

Can A Rotary Saw Cut Wood? [And How To Do That]

Should You Paint Crown Molding Before Installation?

Maytag Dryer Won’t Start – What To Do?

What Is the Best Color for a Metal Roof? [Answer Varies by Climate]

Can You Run A Washing Machine Empty?