It is unclear exactly when it originated, but during the industrialization of the United States in the 1950s, basements became more than a just concept. Many Americans know this unique space as their comfortable entertainment space or musty storage space (or maybe something in between), but basements are not common throughout the country. While the basement's evolution is quite extensive, we've rounded up the best answers to some of the most common questions surrounding these mysterious, history-rich areas of the home.

The basement serves a myriad of purposes. The need it satisfies will vary among each kind of house, the surrounding terrain, the environment, and the desires of the family that lives inside the home. In a colloquial sense, the word "basement" simply refers to an area of the house that is built underground. These areas of the home create an ideal location for storage, livable space, and a safe haven in regions of the US where inclement weather threatens.

Basements come in all shapes and sizes, and due to this, the main use for a basement can also vary depending on the kind of basement that the home has. Below we've got some details on the different types of basements and their primary uses, so please keep reading. 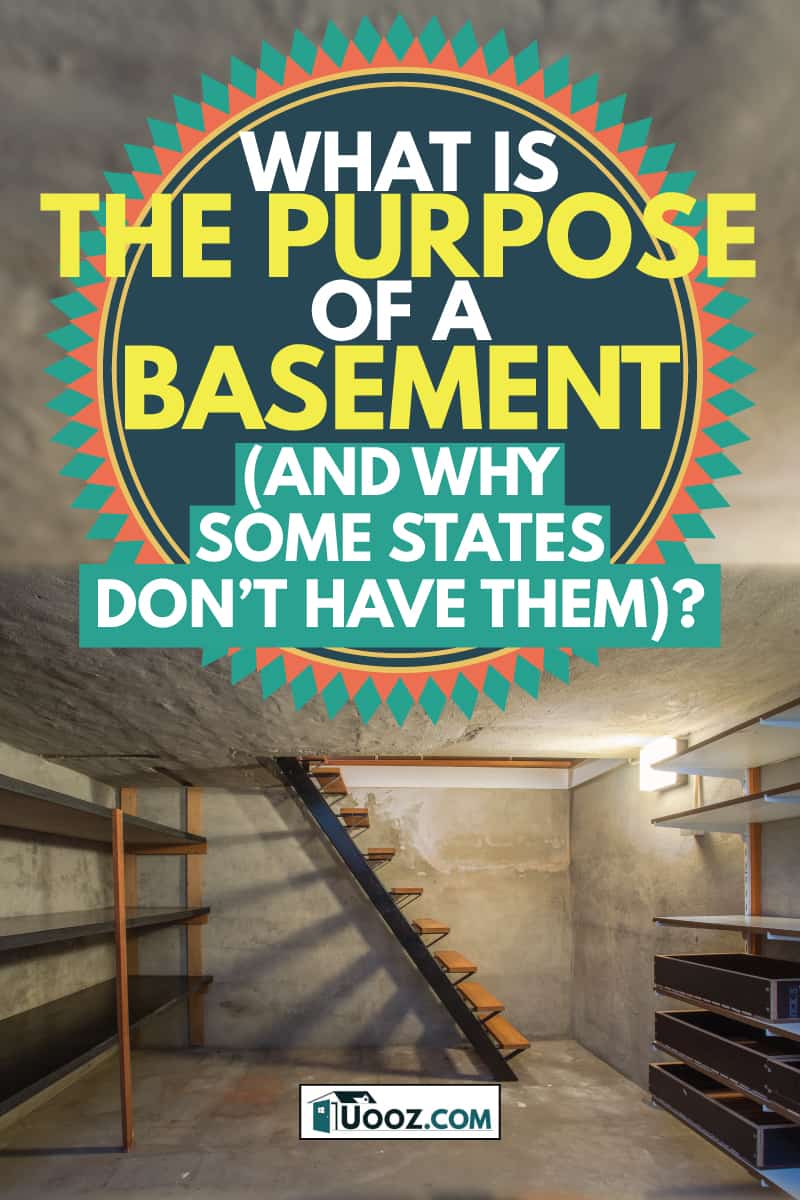 A cellar is a completely underground space. This space is not finished to add extra living space, but it can be finished to be a more classy space to store wine or other dry goods. Cellars are also used to store coal in some areas of the country.

In areas where storms, such as tornados, are very prevalent, cellars are often located outside of the primary home, with access to them on the side of the house or further into a farm field. A cellar such as this would have a lockable door at the top of the steps leading down to it and would be primarily used for shelter from these storms.

A crawl space is an area of limited height located beneath a building. Its primary purpose is to allow access to wiring and plumbing, although some are large enough to offer a little bit of additional storage.

A walkout basement is typically installed in homes built on very hilly terrain. One part of the house is built at the top of the hill, leaving the other part of the house exposed at lower levels. This result is a basement having full-sized windows and outdoor access.

A sub-basement is like a basement to your basement. It goes one level below a standard basement. This is common in homes with a walkout or a finished basement to increase the liveable square footage. The sub-basement usually remains unfinished, allowing additional storage that cannot be accommodated by the finished or walkout basement. Since the necessary construction of these structures is far more extensive than that of a traditional basement, they are not all that common in modern homes but can still be found in older, larger homes in some areas of the US.

Why do some states not have basements?

Several regions throughout the United States offer climate variations that impact the soil in different ways. These variations affect the ability to construct basements. Some areas are more suitable than others for the deeper underground excavation that is required.

Foundations of a home need to be built below the frost line for pipe safety. In areas where the temperatures are cooler, the frost line is deeper into the ground than areas where the climate is warmer.  Areas above the Mason-Dixon line generally require that the foundation is built a little deeper into the ground already (due to the frost line), so adding a little deeper excavation isn't difficult to do. Thus, about 90% of the homes built in this area will have some basement built with it.

South of this line, and also along the East Coast, the soil is significantly wetter. Excess wetness is due to the coast's proximity, like Louisiana, East Texas, Alabama, and Florida, where there are many swamplands.  The extra moisture held in the soil makes the construction of basements much more complicated and costly. Also, in many parts of these areas, the soil is only a thin layer atop a stronger lime bedrock. This makes excavation nearly impossible.

In the more Western part of the country, such as Arizona or California, difficulty building basements is not due to the wet soil but rather the soil type. In these areas, there is a significant amount of clay in the soil that can actually be dangerous to construct a basement within. Clay naturally takes on more water and expands when it is wet, and also dries out and retracts very easily when it dries. This ebb and flow of the soil composition can create major foundational problems with the basement walls and the overall foundation of the home. In these areas, you will find that instead of a basement, outdoor storage space or attics are more common.

Is A Basement Safe During An Earthquake?

Since basements are under larger structures, such as a home or another kind of building, it is not the best place to seek shelter during an earthquake. However, according to the Federal Emergency Management Agency, most earthquake injuries occur when people try to leave a structure or move to a different space within the structure. Your best bet is to ensure that your head is protected by getting as low to the ground as possible and taking cover. If you are already in the basement, you may want to stay put instead of trying to exit. However, if you are not in the basement, do not go to the basement to seek cover.

Is It Bad To Not Have A Basement?

Whether having a basement is good or bad will depend on your own need and desire. Having a basement does introduce some additional possibilities, such as allowing for more storage space or an option to finish the basement for more entertainment or liveable space. A basement introduces more things to consider, such as the surrounding area and the likelihood of a flood occurring, mold, and other undesirable aspects, like small rodents, that could be something that you encounter. You would want to research some of the possibilities and some of the additional expenses that come with maintaining a basement to weigh the pros and cons. Ultimately, decide as to if a basement is right for you and your family.

Why Are Basements Unfinished?

Oftentimes basements are left unfinished simply because of the cost associated with finishing it. Zillow estimates that a finished basement only has a return of about $.48 on the dollar. Since the value of the finished basement will shift based on the needs of the family living in the home, many people will choose not to invest, but instead, leave it for potential if the need arises from a family in that house down the line.

What Is The Best Flooring For A Basement?

If you decide to take the plunge and make the investment in finishing the basement, there are ways to ensure that you get the most out of the money you invest. When making a decision such as the best flooring for your basement, you'll want to consider a few different factors. You may want to consider the durability of the material you choose versus how much use the floor will be getting. You also may want to weigh the choices against the expense of the material and installation and the return from the investment.

Each homeowner has their own style and preference, but some common floor types for basements are carpeting, ceramic tiles, concrete, vinyl, laminate, and Marmoleum. Depending on the material you choose, there are many options to adapt each material to your style preference. Check out our article, "Carpet Vs. Laminate In A Basement Which Is Better?" as you're making this decision for your basement.

Basements have a long history in the US and around the world. There is no one universally accepted style, type, or use for basements, but there are many options to make the most of this unique space that not everyone gets the benefit of having. So, whether you're about to embark on a basement remodel or you just learned that basements are not as popular in some areas and why, hopefully, you were able to gain some useful insight from these common questions.

How Long For Heat Tape To Thaw Pipes

Should The Inside And Outside Of A Front Door Be The Same Color?

How Thick Should Vinyl Siding Be?

What Nails Should I Use For Wood Siding?

What Type Of Mortar To Use For Brickwork