Since bug bombs are used to kill insects, it's likely not surprising that they might be harmful to other animals, too, including fish! So, if you're wondering how to protect your fish tank while you bug bomb your house, you've come to the right place. We've researched the topic in depth and have some methods for you to try.

Bug bombing your house with a fish tank inside can be risky. The best way to protect your fish is by moving your tank to another location. However, we understand this isn't always possible. In this case, you should turn off the tank and any airflow pumps and cover the top.

We've given you the basic steps to protect your fish tank from a bug bomb, but keep reading as we discuss this further. We'll even include a YouTube tutorial to help. Additionally, we'll answer some other questions you might have about fish, insecticides, and bug bombs. 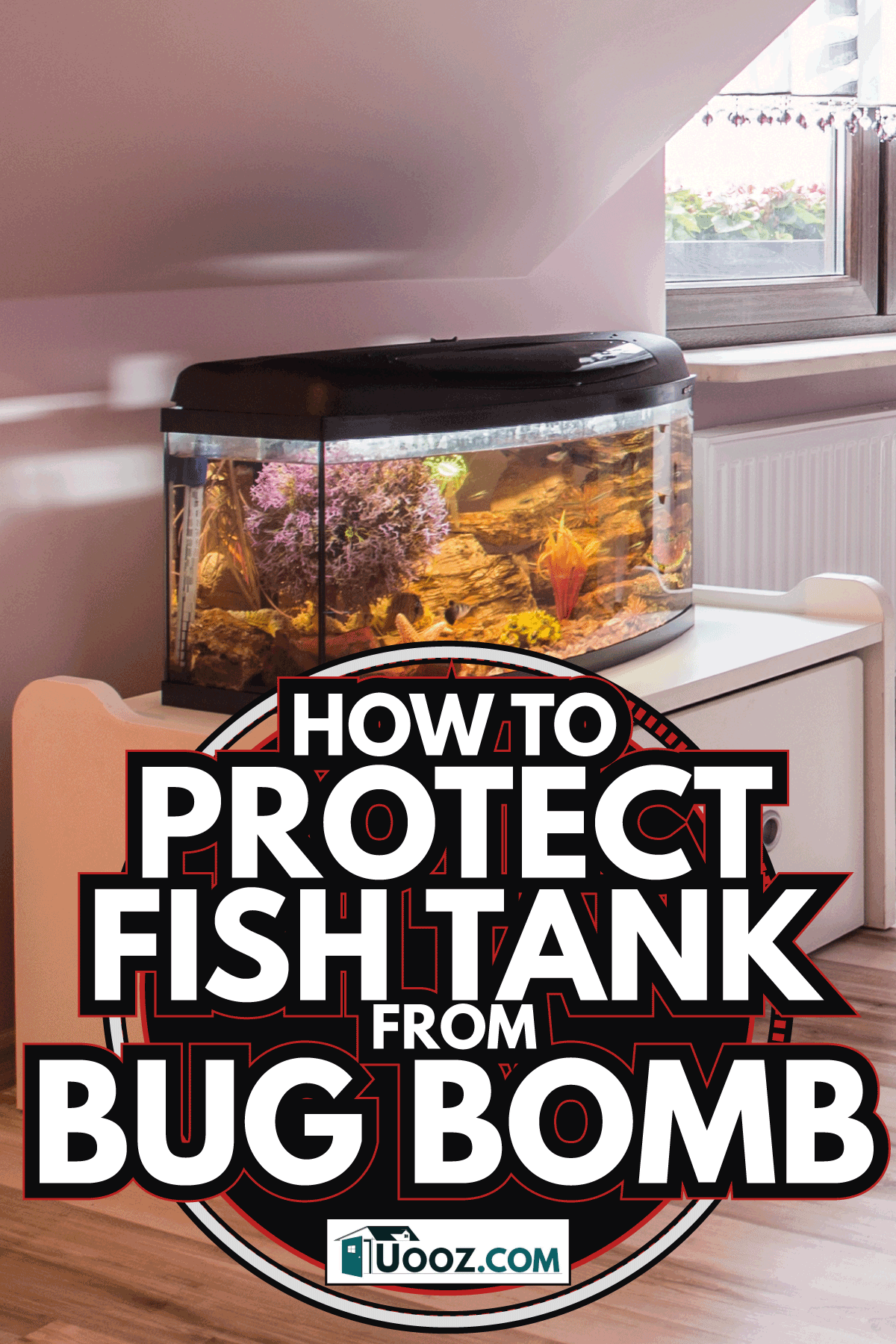 Removing the fish tank from the location you are bug bombing is the best way to protect your fish. If you have a smaller tank, this is probably a doable option for you.

You will need to remove the tank from the house even if you are only bombing one room. Even if the tank is in another room with the door closed, the pesticides can still seep in and make their way to your tank.

If your tank is too big to move easily or you have nowhere to relocate your tank to, you will need to cover it.

Before you cover the tank completely, you will need to turn it off. Make sure any airflow pumps are also switched off. Airflow pumps direct oxygen through the tank. If it's turned on while you bug bomb, it may pull in pesticides instead.

To adequately cover your tank, you will need trash bags and tape. Using trash bags (tape them together if your tank needs more than one), cover the top of your fish tank and secure them with tape to create a seal.

Your tank will likely be fine if you stop at this point. However, for extra protection, drape a blanket over the top as well.

After you've bombed the house, wait a few hours before removing the cover.

Video Tutorial For Covering Your Tank

If you're more of a visual learner, check out this short video we found on YouTube that explains the process perfectly!

Will A Bug Bomb Harm Fish?

Put simply, yes. A bug bomb will harm fish. Many bug bombs will instruct you to cover and turn off your fish tank or aquarium, just like we explained above. It's essential to take steps to protect your tank and fish from a bug bomb.

Bug bombs often contain Pyrethrin as their active ingredient, which, according to Veterinary Centers of America Inc., also known as VCA, fish and cats are very sensitive to.

If you choose not to cover your fish tank, there's a good chance your fish will die even from a small exposure.

To be extra cautious, you should also remove any aquarium-related tools or products that might at some point interact with the tank.

If you leave them out while the bug bomb releases pesticides and then forget to clean them, you risk contaminating your tank.

What Do You Need To Cover For A Bug Bomb?

So, you need to cover your fish tank for a bug bomb, but what other precautions should you take? There are quite a few. Let's discuss what else you should cover before bug bombing your house.

When you bug bomb your house, you should cover anything that could become contaminated and then come in contact with you later on. This includes, but is not limited to, clothes, utensils, food, toys, and even toiletries.

Electronics should also be covered as they can become damaged from the chemicals in bug bombs. Also, don't forget to cover your potted plants or remove them from the home entirely. They, too, can be affected by pesticides.

You can use large plastic tarps to cover most of your bigger belongings and polyethylene bags for smaller items.

If you're also considering bug bombing your attic, check out our other post on the topic here: Can You Fog Your Attic For Bugs? [Here’s How] 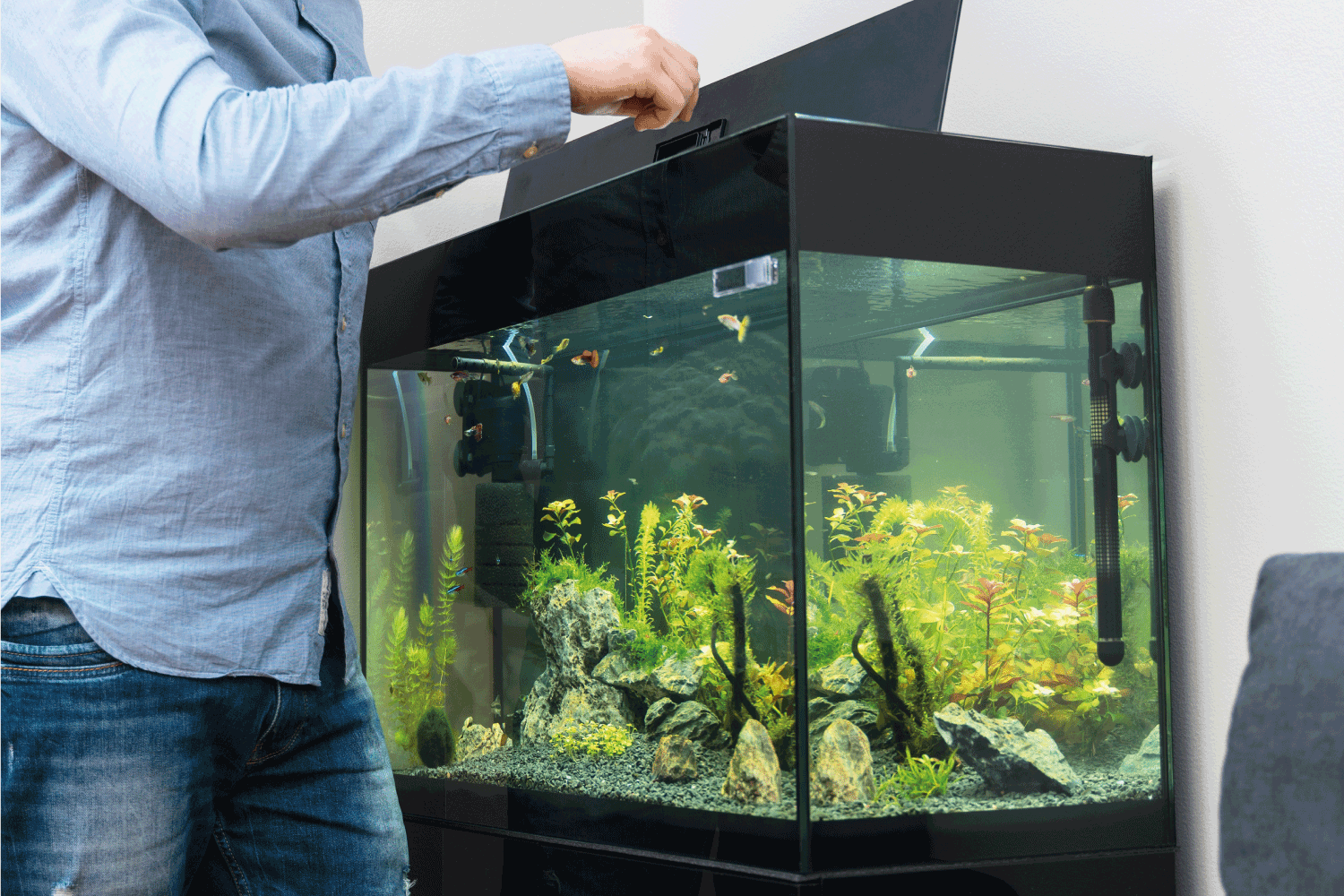 Is Pest Control Safe For Fish?

Any kind of aerosol or "fogger" can be harmful to fish, so you'll need to remove or cover your tank before using them in your home.

If you need to treat a smaller insect problem in your home rather than a significant infestation, consider spraying the home using a liquid spray instead. Liquid sprays can be directed into cracks and crevices and won't pose such a threat to your tank.

Other fish-safe pest control methods include glue traps, baits, citrus oils, plants, and diatomaceous earth. Glue traps and baits can be placed away from your tanks and pretty much anywhere in the vicinity as long as you don't place them inside it.

Some citrus oils and plants can also be used to deter insects. Just be sure to make sure they are safe for any other pets you might have too!

Diatomaceous Earth is a non-toxic, natural pest control method. It can be used to kill several crawling insects. You can place it all over your house, and there are even ways to use it inside your fish tank. It is safe to use around fish and other wildlife.

Are Insecticides Harmful To Fish?

Many insecticides are harmful to fish. For example, the insecticides in bug bombs will likely kill your fish if any makes it into your tank.

However, this doesn't just include insecticides you might use in your home. Agricultural insecticides can also cause problems for fish in ponds, lakes, and rivers.

There have been numerous studies on the effects of insecticides on fish. One study states that while an insecticide might not kill a fish, it can cause many abnormalities in its growth and development. 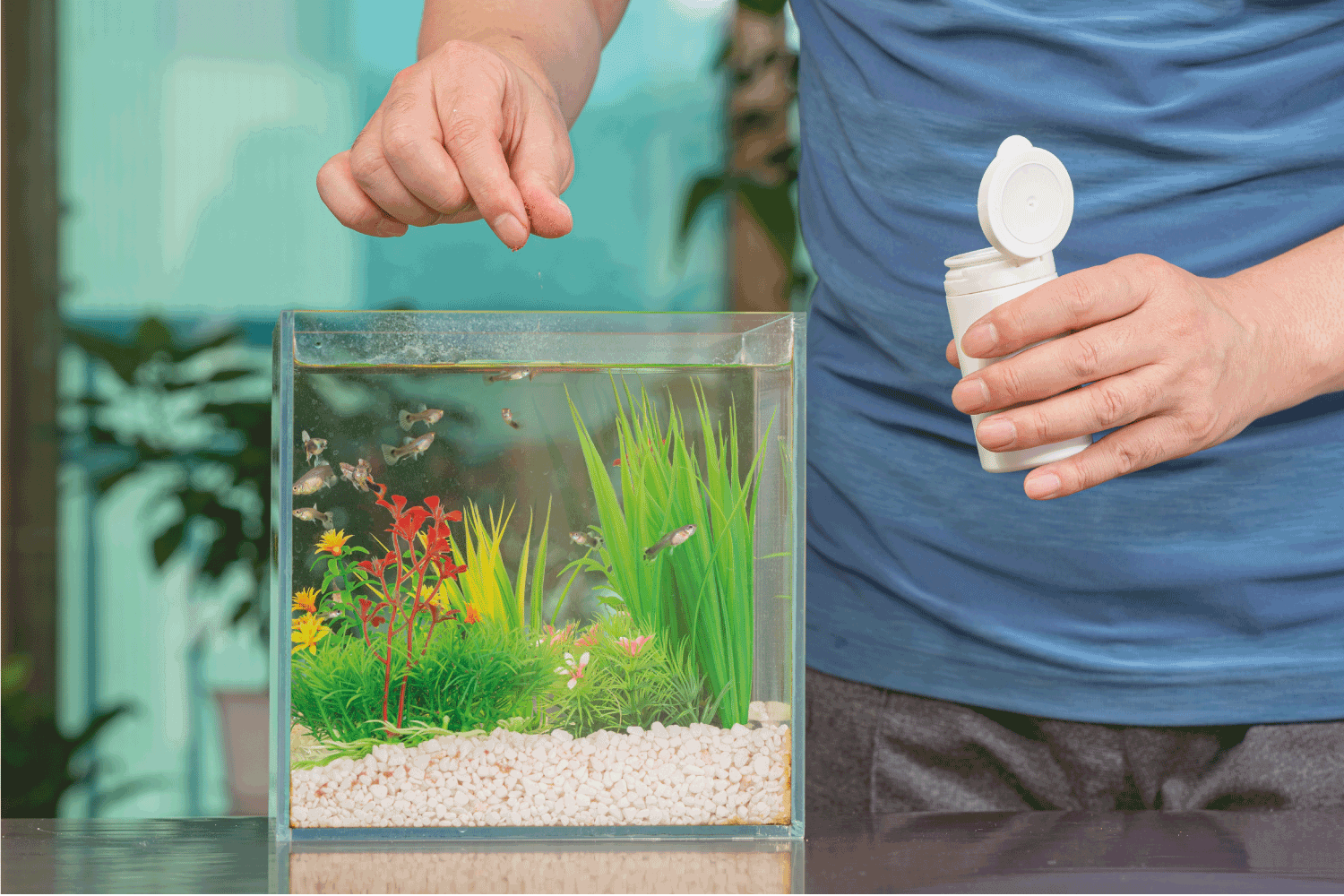 Another article describes how the use of neonicotinoids led to the depletion of plankton and fish and caused the collapse of a fishery in Japan.

Neonicotinoids are derived from nicotine and are one of the most widely used insecticides worldwide, which is bad news for fish.

Sometimes the neonicotinoids harm the fish's food source before directly harming the fish. However, this still subsequently affects the fish. With no food to eat, the population will decrease.

In some cases, even small levels of neonicotinoids have caused harm to fish. In these scenarios, where the fish were exposed over a long time, reproductivity was affected, and growth abnormalities were noted.

Insecticides That Will Not Harm Fish

Despite the many insecticides that will harm fish, some are relatively safe to be used around marine life. Diatomaceous Earth that we talked about earlier is an insecticide that will not harm fish.

Another, Essentria IC3, is also safe for use around fish which means you can use it around a pond to get rid of unwanted guests. It's an all-natural insecticide which means it won't harm you or any other pets you might have! 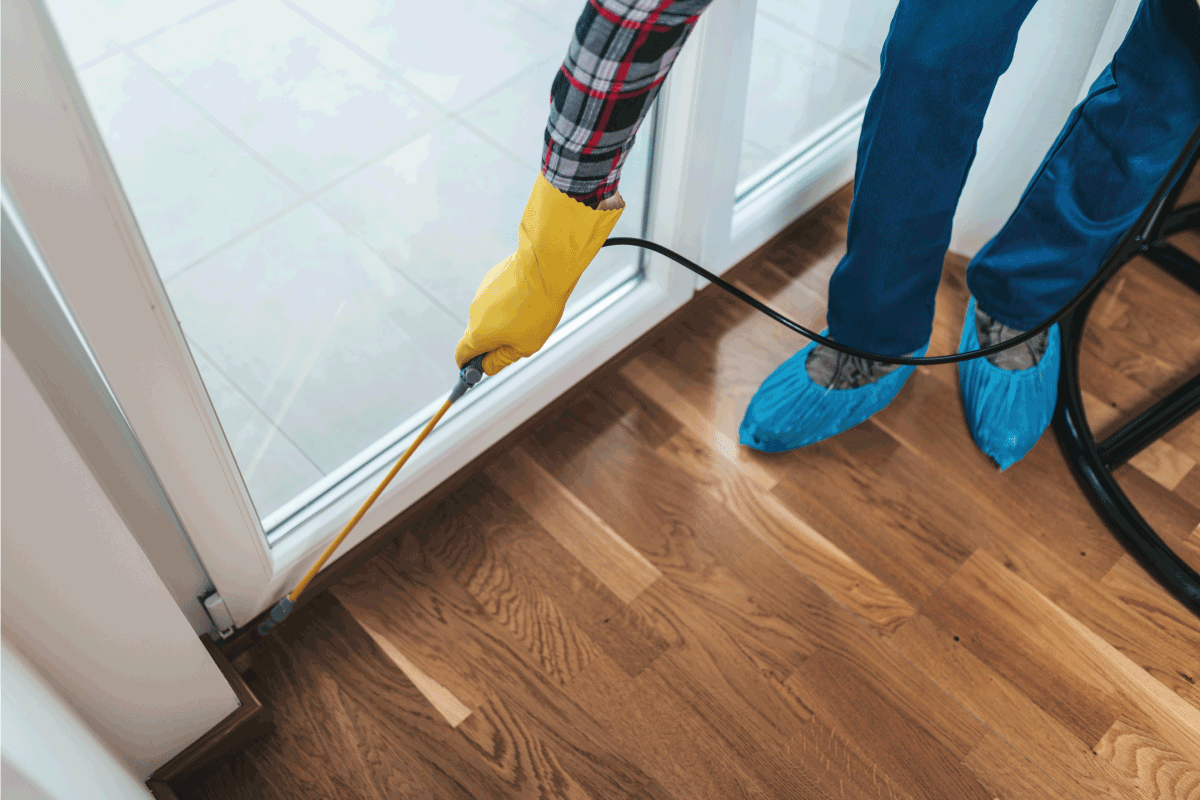 It's relatively easy to protect your fish tank from a bug bomb. Of course, the best way to protect it is to remove it from the room, but fish tanks can be heavy, so sometimes that isn't doable.

In that case, hopefully, our article has helped you devise a plan to keep your fish tank protected from any unwanted chemicals. Good Luck!

If spiders are your primary concern, you might be interested in reading some of our other posts on the topic. Check out our other articles below on ways to take care of spiders in your garage and basement:

How To Keep Spiders Out Of The Garage [A Complete Guide]

How To Get Rid Of Spiders In The Basement?

How To Clean Toilet Siphons

How To Fix A Leaky Basement Wall From The Inside

Milwaukee Vs DeWalt Vs Makita: What Are The Major Differences?

How To Protect Pex From Sunlight

Carpet Buckling At Seams—What To Do?