When plumbing a new structure or redoing pipes in an existing structure, you want to do the job right. You also want to avoid difficult installation methods. If you look at plumbing material options, you may wonder about PEX, and it's easy to install. We've done the research and have answers for you.

PEX is easier to install than most rigid pipes due to its flexibility, which allows it to curve through misaligned plumbing holes within walls. It can also turn in areas that may require multiple elbows when using a rigid pipe. It would help if you had a simple cutting tool, a crimping tool, and crimp rings to install PEX.

Installing PEX is simple for a DIYer. We will discuss the process and some benefits and downsides of PEX below, so read on. 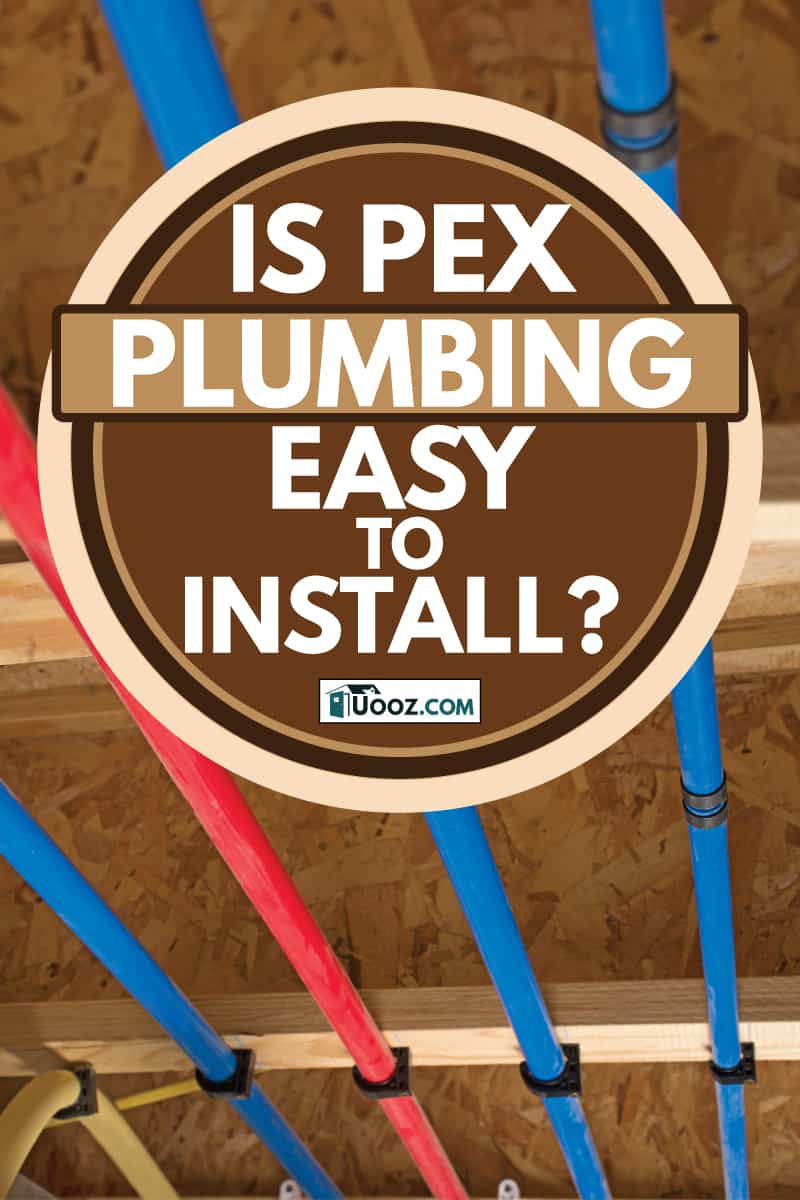 PEX has proven to be a reliable and safe product that rivals copper or PVC. But most people consider PEX much easier to install. It can extend long distances in one continuous piece, even around curves and bends. This helps avoid many elbows and connectors, each of which may be a source of future leaks.

If adding or replacing a water line in an existing home, some connections will be in tight areas, such as inside a wall. If you are in a tight space like this, using a torch to solder copper pipe can be dangerous. PEX doesn't require soldering and connects with simple connectors. With both copper and PVC, if you need to cut a pipe inside a wall, it can be difficult to get a smooth cut. You cut PEX with a cutter that is like a pair of shears.

Here is the installation process for PEX:

The connector on each end may be an elbow or a connection to another pipe or connector. In many cases, you can run PEX long distances through a structure, around corners, and up and down walls without adding any elbows or connectors in the middle.

PEX needs a clean-cut, and you should cut it with a pair of cutters, as shown below:

With PEX, if a pipe inside a wall needs trimming, you can bend it out far enough to easily cut it. With copper or PVC, that may not be so easy. This makes working with PEX in tight spaces much easier.

When you run a PVC or copper pipe through a home, there are necessarily going to be multiple elbows attached. Every time the pipe changes direction, you will have a joint that is soldered or glued, and each connection is a source for a possible future leak. Some of these possible leak points are buried within the walls, making them difficult to repair when they happen.

With PEX, you can often change direction with no joint or coupling required. This means you can sometimes set up a manifold system where the water comes into the structure, then run from it to each room with no elbows between.

If running PEX horizontally, you should support it about every 32-inches with a plastic clip or a metal clip designed to work with plastic. If running vertically, supporting it at every floor should be sufficient. Here are some examples of the kinds of clips you should use:

With PEX, there are a few options for connectors:

Here are the steps to connecting with a crimp connector:

Step 1:  Slide a crimp ring, usually made of copper, over the outside of the PEX. This PEX Crimp Ring by Iwiss is a prime example of this connector.

Click here to see this crimp ring on Amazon.

Step 2:  Push the PEX onto the connector, which will be ribbed or barbed. It needs to go all the way on, and you need to make sure it is free of debris and dirt. An example of this connector is the Straight Brass Coupling (12-pk) by Sungator:

Step 3:  Slide the crimp ring to about 1/8-inch from the end of the PEX, then crimp it down using a crimping tool. Here is an example of the crimping tool, the Combo PEX Crimping Tool by Iwiss:

Click here to see this crimping tool on Amazon.

Cinch connectors work the exact same way as the crimp-on connectors; except instead of compressing all around, the ring is cinched together from a single spot. An example of the cinch rings are the Cinch Rings by SharkBite:

Click here to see these cinch rings on Amazon.

With a cinch connector, you need a different tool than you use with the crimp-on connectors. The advantage to cinch rings is that this one tool will work on various sizes of cinch rings; with the crimp tool, you need a tool or jaw insert for each size of pipe you work with. This PEX Cinch Tool by Iwiss is the type of tool needed:

Click here to see this cinch tool on Amazon.

These types of connectors are easier to install and require fewer tools but are substantially more expensive. Here is the process:

That's all there is to it. These connectors have a few downsides:

The biggest downside is the cost. If you are installing a large number of these, it's going to get expensive quickly. However, if you are doing a small job, then they may be worth looking at. Here is an example of a push-to-connect connector Push-To-Connect Coupler By SharkBite

As you can see, it's fairly simple to install PEX. Here is a video showing the process using a crimp connector:

How Long Will PEX Tubing Last?

PEX pipe can be expected to last 40-50 years, possibly more. There are many places in Europe where PEX has been in place for over 30-years with no sign of problems. Many PEX pipes come with a 25-year warranty.

Which Is Better, PEX A or B?

Whether PEX A or B is better depends on your requirements and budget. PEX B is cheaper and has a higher burst rating, but PEX A is more flexible. If you buy your pipe in a coil, rather than stick form, PEX B is more difficult to work with because it wants to go back to that coiled shape even after straightening it. You can fix many kinks that occur during installation with just a heat gun on PEX A, while PEX B requires you to cut the kink out and insert a coupling.

With the fact that PEX A is more expensive than PEX B, you might think PEX B is a better option. But our research shows that most people recommend PEX A. Some of this may be because it is less likely to break from a bend since it is more flexible and less likely to have problems if a pipe freezes up.

Can I Use PEX For Main Water Line (And What Size)?

Why Is PEX Banned In California?

PEX is no longer banned in California. They had a ban on it before 2010 when it was approved for use. Since then, lawsuits involving an environmental impact study have delayed its use. There were concerns about the chemicals used in its production and whether they could wind up in the drinking water. But PEX has since cleared the testing requirements and can now be used in the state of California.

PEX is simpler to install than most other types of pipes. It is flexible and requires fewer joints, making installation much quicker. There are a couple of special tools needed for installing PEX, but they are inexpensive and readily available. Many DIYers use PEX, and a lot of contractors recommend it.

If you have more questions about plumbing materials, check out our related posts:

Squeaky Floor Under Carpet? Here’s What To Do

How Far Apart Should Expansion Joints Be In Concrete?

How To Replace A Mobile Home Bathroom Exhaust Fan

Which Way Should Wood Flooring Run In A Bedroom?

How To Seam Pre-Padded Carpet