A vehicle jump starter is just one of the many tools DeWalt offers to its customers. But if you are a new owner of a DeWalt jump starter, then you will need to know how to use it. Let's take a look at how to use one below.

In order to use a DeWalt jump starter, follow these steps:

It's essential to understand how to use your DeWalt jump starter in case of an emergency. In this article, we will walk you through each step in detail so you know how to properly use the DeWalt jump starter. In addition, we will answer other frequently asked questions about jump starters and DeWalt products, so read on!

How Do You Use A Portable DeWalt Jump Starter?

However, when the time comes, it's important to know how to use your jump starter so you can get back on the road. It's recommended to read the owner's manual on your jump starter and vehicle for specific instructions.

It's always a good idea to wear protective eyeglasses and gloves when using a jump starter to avoid injury.

For the DeWalt jump starter in specific, follow the steps below.

Check out the DeWalt Jump Starter on Amazon.

Before you can jump start the car battery, you will need to ensure the jump starter is fully charged. When you first take your jump starter out of the box, it's best to plug it in to be charged.

Attach The Jump Starter To The Battery 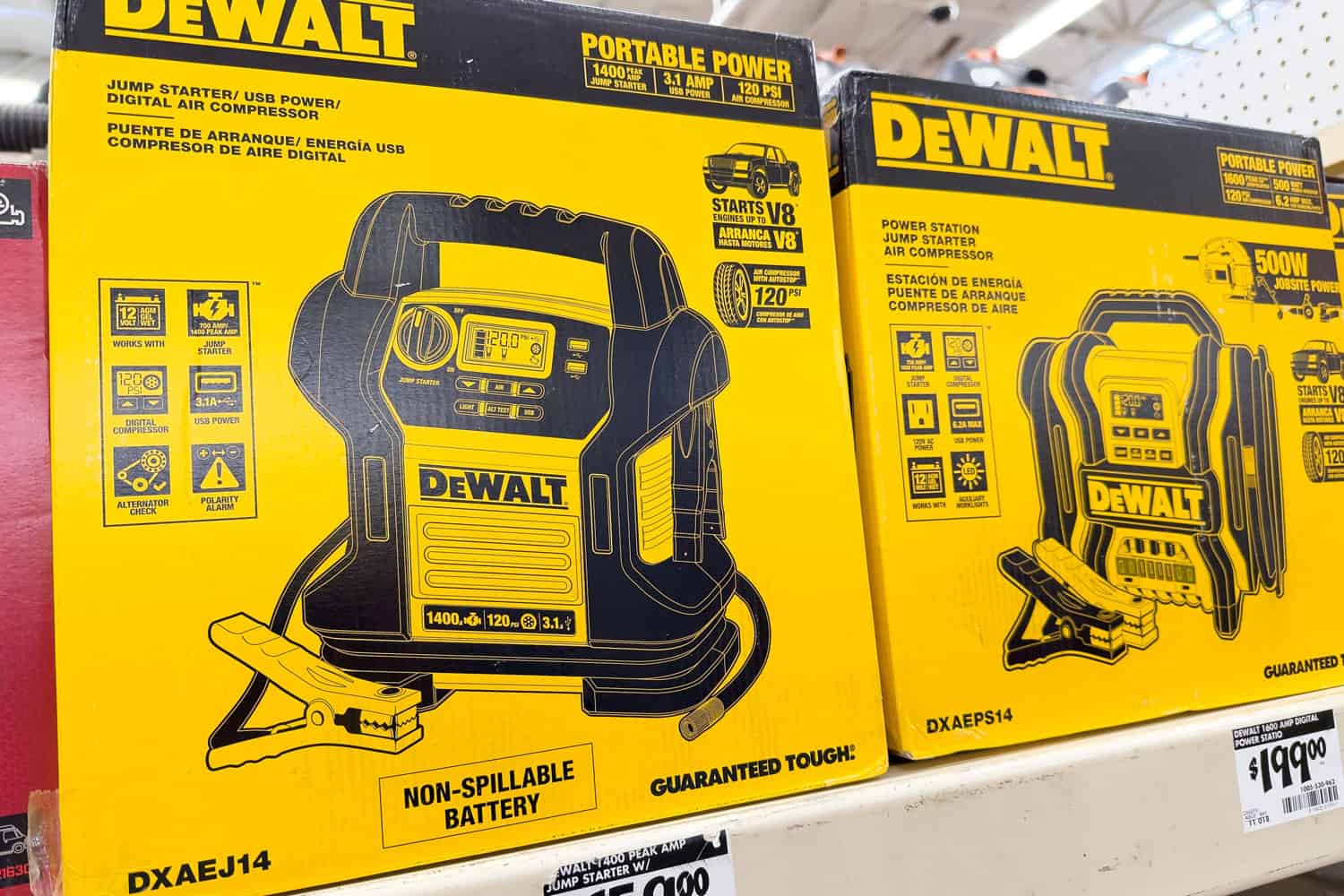 Once you have checked that your jump starter is fully charged, you can proceed to attach it to your car battery. Take the key out of the ignition and press or pull the hood release.

Check your owner's manual if you can't find your hood release. Typically they are located below the steering wheel near the brake pedal.

Once you have popped the hood, with the jump starter turned off, attach the jumper cables to the battery terminal. No matter the vehicle, the red clamp goes to the positive terminal, and the black goes to the negative cable or the ground.

It's important to note that not every car battery has a negative terminal, and you may need to refer to the owner's manual for the ground location. If there is any corrosion on the terminals, remove as much as you can to ensure a solid connection.

Turn The Jump Starter On

Next, put the key into the ignition and try to start your vehicle. Avoid cranking the ignition for longer than 5 seconds, as this can cause damage to the starter. If the vehicle doesn't start, then take the key out of the ignition, turn the jump starter off, and readjust the clamps.

After trying 4-5 times and the engine still won't turn over, then the battery may be bad. In this case, you can either take the battery out and take it to an auto parts store to have it replaced or leave the jump starter on the battery to charge and try again in 10-20 minutes.

Do An Alternator Test

Having this insight is useful, as it will troubleshoot the issue for you. And, you will know whether the battery or alternator needs to be replaced.

Turn Off The Jump Starter 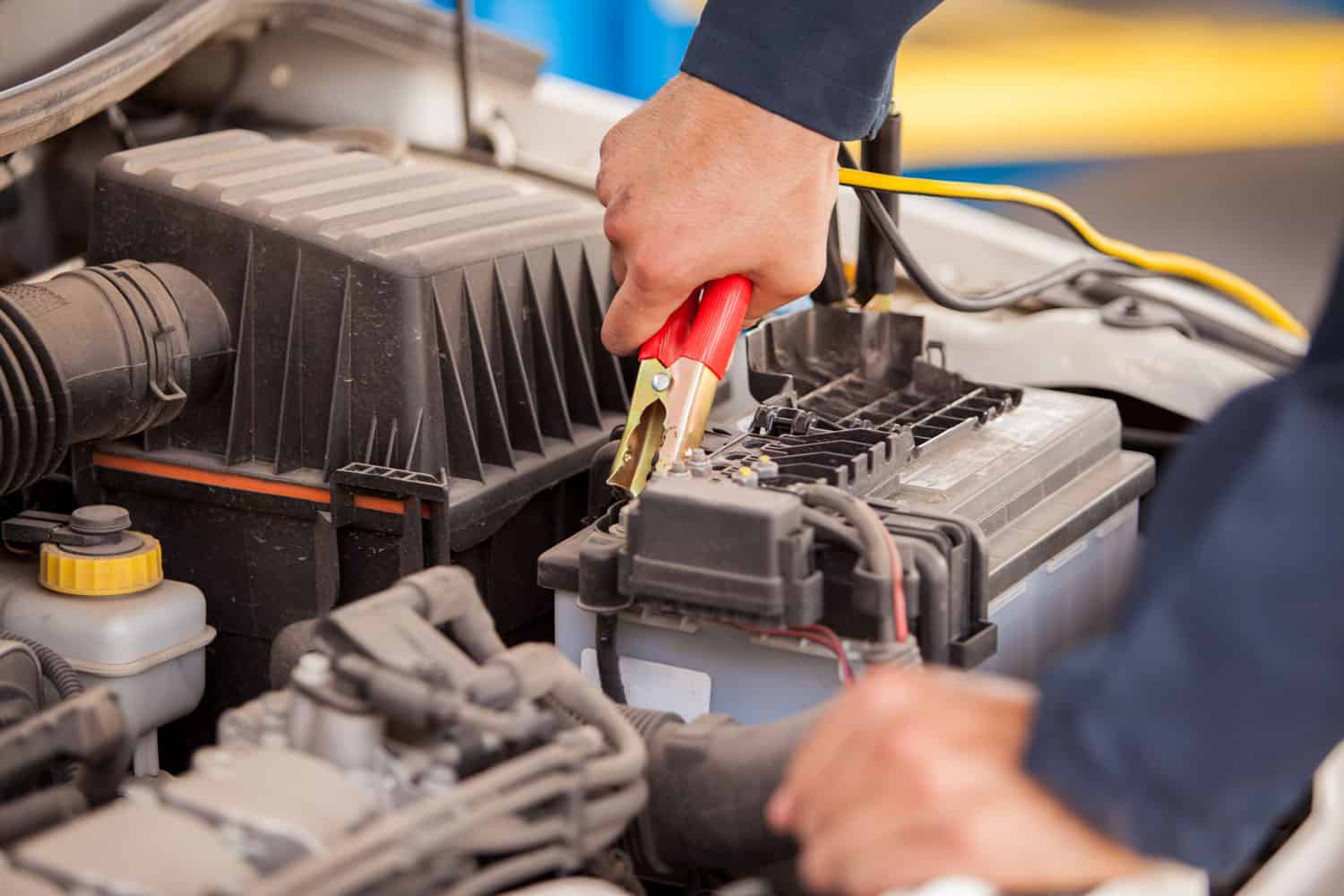 If the engine is started and the alternator looks good, then you can turn off the jump starter. You should always turn the jump starter off before removing the clamps to avoid injury.

Simply turn the black dial to the "off" position and put the clamps away. It's recommended to let your engine run for several minutes before turning it off so the car battery can charge.

After using the jump starter, it's always a good idea to plug it into an extension cord so it's fully charged for the next time you need it.

How Long Do DeWalt Jump Starters Take To Charge?

It's recommended to let the DeWalt portable jump starter charge for 40 hours for a complete charge. This allows the battery to be charged to 12.8 volts and will give the best performance for jump starting a vehicle. 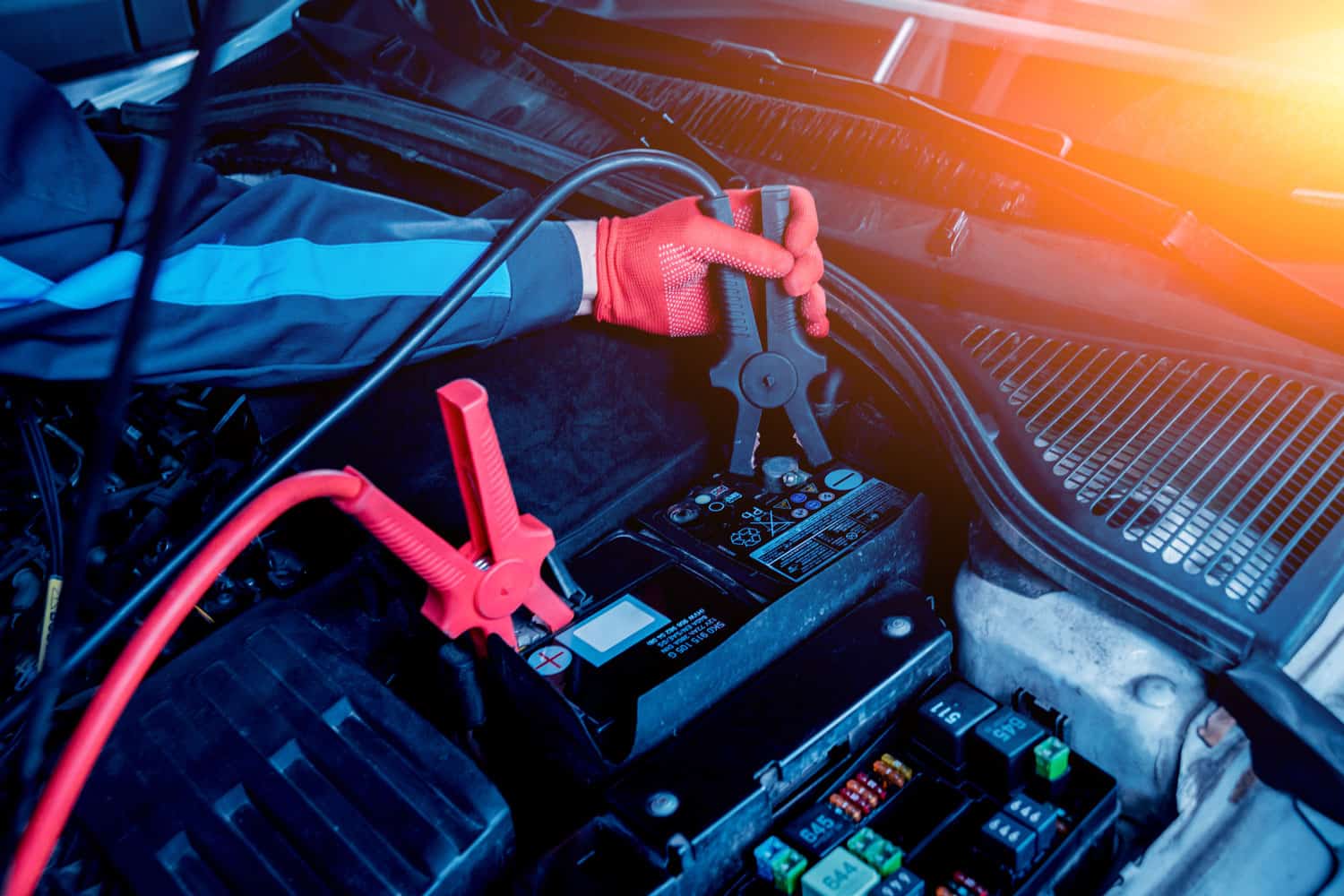 As mentioned, you should also charge the jump starter after each use. Not only will this ensure your jump starter is charged when you need it, but it's also good for the battery's health.

Lastly, even if the jump starter hasn't been used, you should still charge it every 30 days. When the jump starter isn't in use, it can slowly lose charge and not have enough juice to start your vehicle.

What Other Features Does The DeWalt Jump Starter Have? 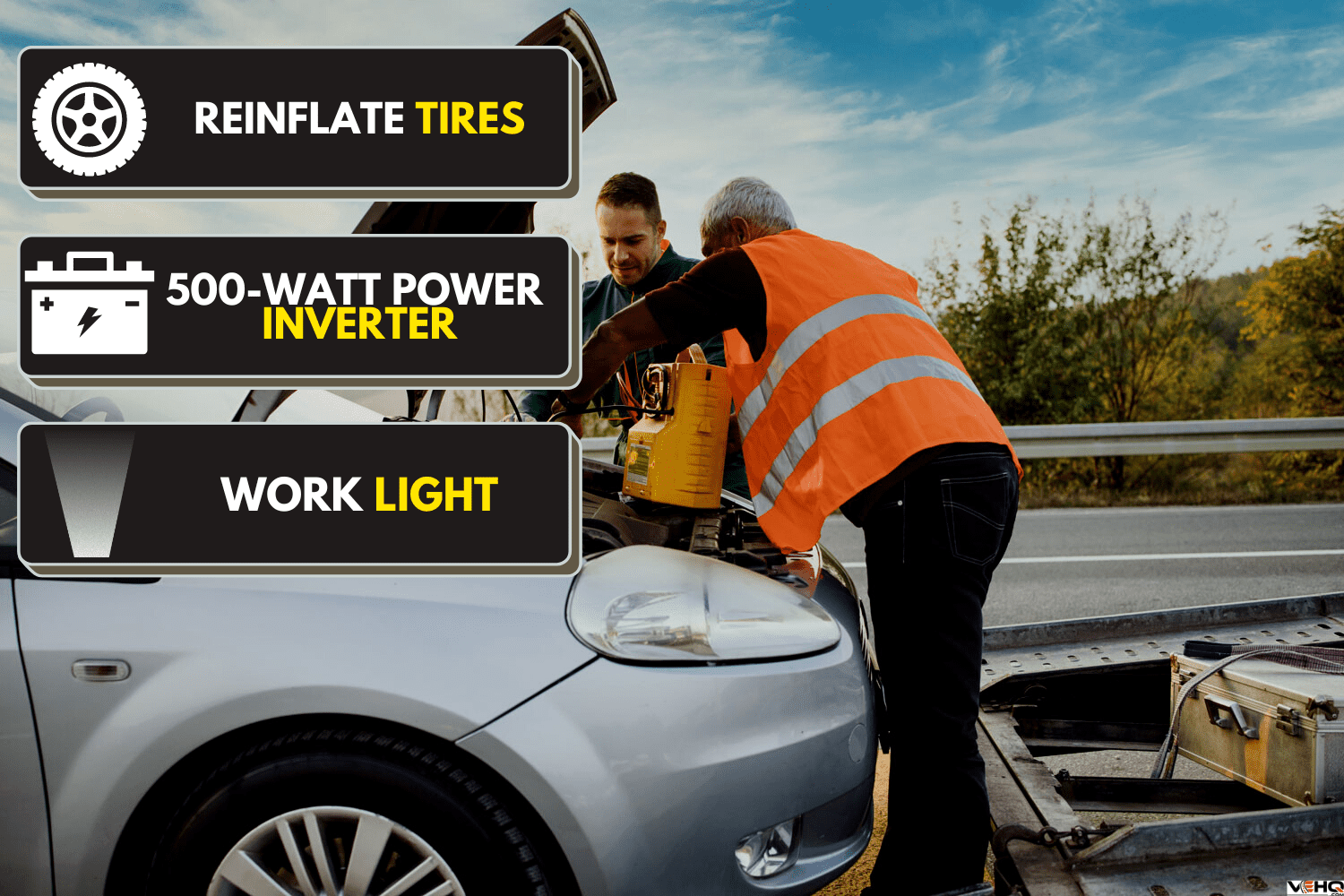 If you have the DeWalter jump starter and power station combo, then you have more features to take advantage of. In addition to being able to start a V8 engine, you can do the following:

With a 120 PSI tire inflator, you can quickly refill your tires before hitting the road. You can also use this if you have a small leak in your tire. This way, you can air up the tire and make it to the nearest tire shop to have the hole patched.

The power inverter will charge or power small household appliances such as laptops, lamps, and other battery-powered tools.

You can also use one of the four USB ports (depending on the model) to charge your phone or other small devices.

While it's not a huge selling point, having a built-in work light can be a great help. Simply press the "light" button on the jump starter and point in the direction of your work area. Just be sure to turn it off when you are done, or it will drain the battery! 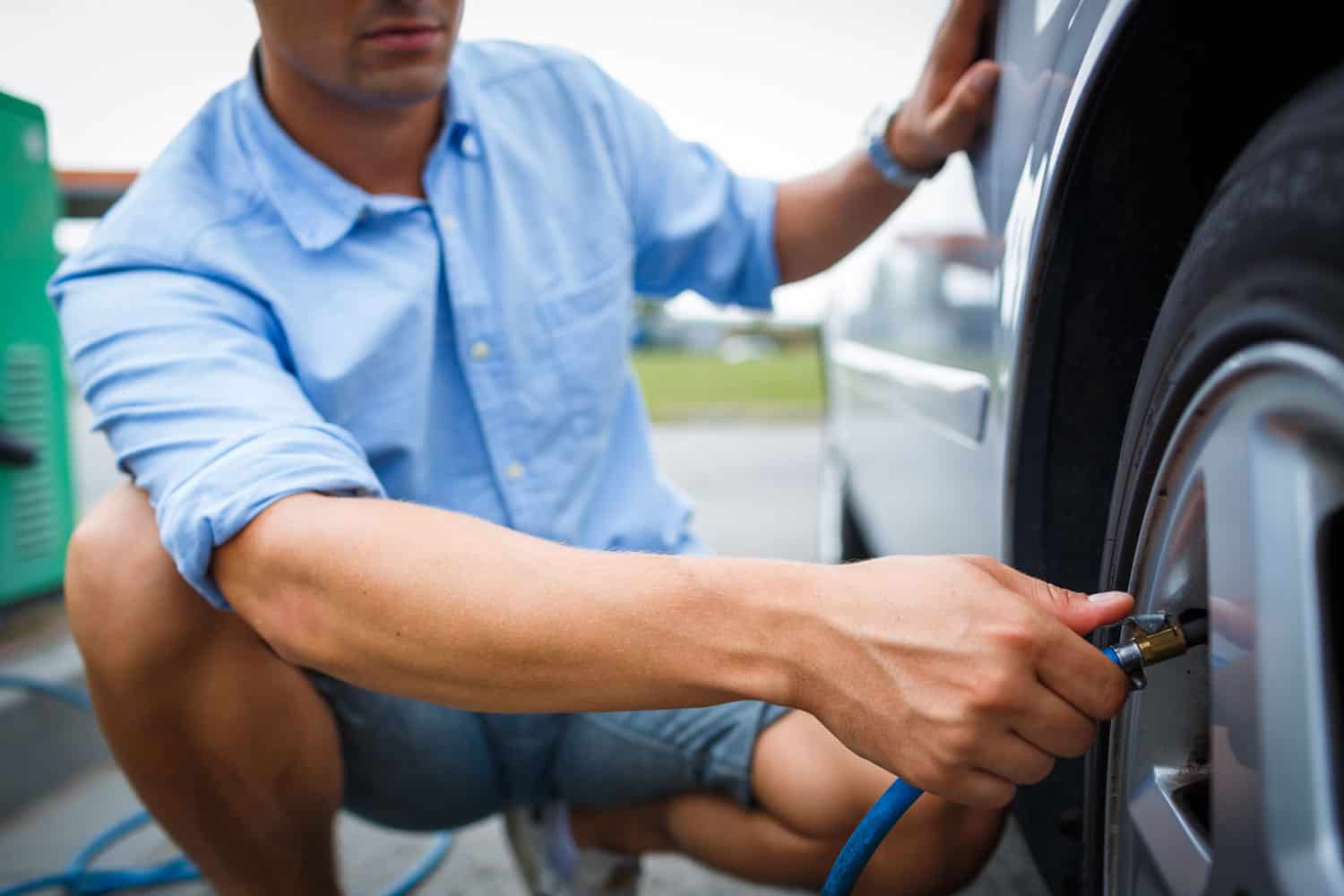 How Long Does A DeWalt Jump Starter Last?

The lifespan of any portable jump starter will vary widely depending on how often it's used and how it's cared for. With that said, you should be able to get at least three quality years out of your DeWalt jump starter before it needs to be replaced.

If it fails within the first year of use, then it may be a manufacturer defect. In this case, you should reach out to DeWalt customer service and make a warranty claim. If DeWalt approves the claim, they will repair the jump starter at no cost to you.

To get as many years as possible out of your DeWalt jump starter, ensure you are charging it as recommended by DeWalt. Check the battery care instructions that come with the jump starter.

You should also store it properly to avoid any damage. Typically, jump starters should be stored in temperatures between 50-70 degrees Fahrenheit. Temperatures above or below this range can damage the battery and cause premature failure.

Lastly, ensure all cables are stored correctly so they don't fray or become damaged. By following these steps, you should get a good return on your investment.

Is The DeWalt Jump Starter Worth Buying?

If you look at the reviews on the DeWalt jump starter, you will get mixed reviews. It's important to take reviews with a grain of salt, as some complaints could be due to operator error.

Nonetheless, the most common complaints are related to the air compressor turning on and off. As a result, it took a long time to get enough air in the tires for safe driving.

There are good to great reviews praising DeWalt for making a quality product that helped consumers in a bind. We recommend doing your own due diligence and comparing jump starter brands before making a final buying decision.

Overall, using the DeWalt jump starter is relatively easy to use. You should still read the instructions manual to ensure proper operation.

Made it to the end? Here are other articles you might find helpful:

How To Start A Dewalt Pressure Washer [Quickly & Easily]

Can You Leave Dewalt Batteries On Charger?

How To String A Dewalt Weed Eater [Step By Step Guide]

How To Attach Drain Hose To Dishwasher [In 11 Easy Steps!]

Generac Generator Won’t Start – What To Do?

5 Types Of Foundation Cracks [What Homeowners Need To Know]

Does A Finished Basement Need A Sump Pump?

Should You Dry The Floor After Mopping?

How To Stain Wood Filler To Match Floor