Brad nails are thinner and more delicate than other nails, making them perfect for areas where you don't want a large, noticeable hole left by a wide nail. But sometimes you still might have to pull them out later - which can be more difficult since they are so small and hard to get a good grip on. This is especially true if you're working with a more delicate surface. For example, how do you remove brad nails from drywall, without putting a hole in the wall? We've brought you the answer.

You can use any good pry tool for removing a brad nail, just like any other nail. The claw end of a hammer, a pry bar, or pliers are all suitable choices for getting a grip on the nail. The most important part of removing a brad nail is covering the drywall to protect it before you start. Use a thin piece of wood or a putty knife.

Keep reading as we explain exactly how to use a putty knife to protect the wall - we'll even give you a helpful video that demonstrates the process. Then, we'll cover how to pick the right tool. We'll offer some pointers on what to do if the nail is really, really stuck. Finally, we'll show you one last tool that works in the absolute worst-case situations - even when the nail has no head or you have to pull it out backward. 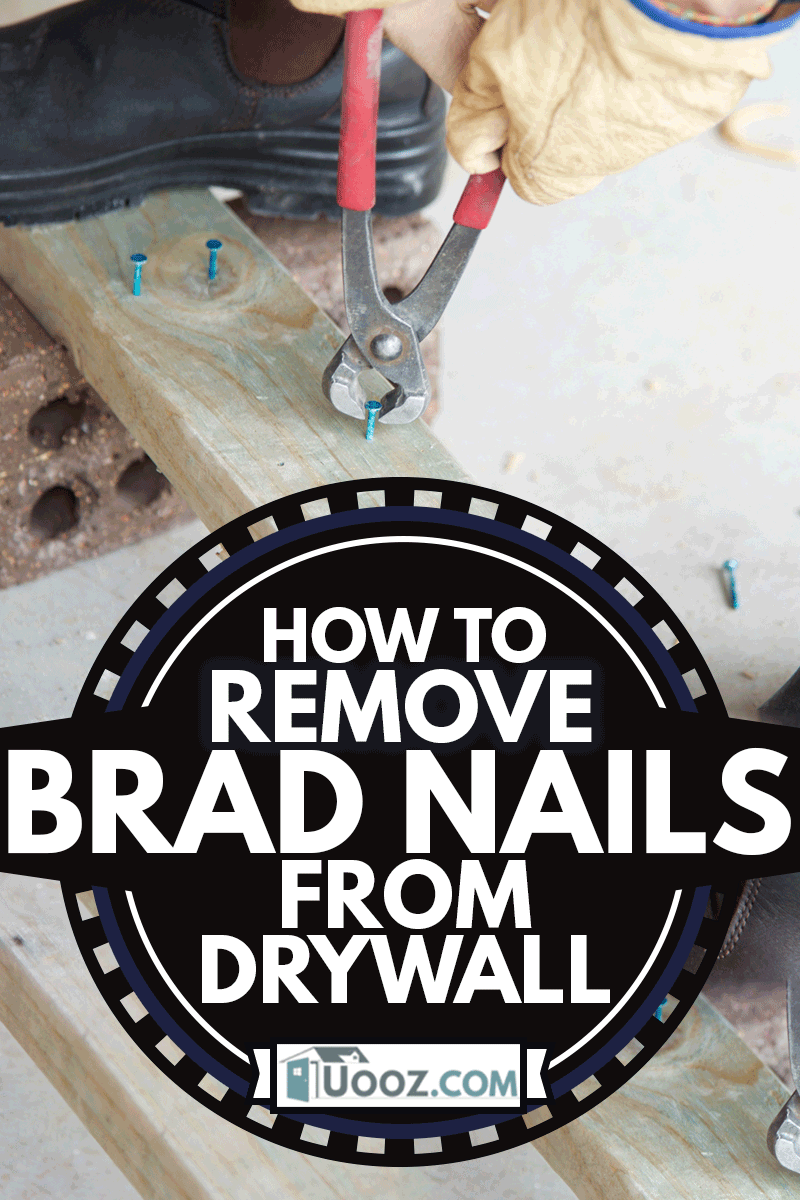 How To Remove Brad Nails From Drywall

Removing brad nails from drywall is, more or less, the same as pulling out any other nail. The head is a bit smaller, so you need to get a good grip on the nail with whatever tool you use.

The real trouble isn't pulling the nail - it's not bashing a hole through the drywall when you do it! You need to protect the drywall before you start yanking on the nail.

Do this by putting a thin piece of wood or a putty knife down. Then, you can use the tool of your choice to grip the nail. Use the putty knife to guard the surface as you rock the tool back and forth for leverage.

Watch this video to see how it's done:

What Tool Is Used To Remove Brad Nails?

There are three tools that can be effectively used to remove brad nails. They are:

Obviously, the hammer works in the traditional way - using the claw to pull out the nail. This isn't the easiest or ideal method though. The head of a brad nail is so small, there's very little to grip.

The pry bar is a bit easier. However, it still has the same issue as the hammer. There's not a lot of head for the pry bar to get much leverage. Also, it can be easy to scuff or damage the wood if you aren't careful. Always protect the surface and don't use too much force.

Many carpenters find a pair of pliers to be the best method for removing a brad nail. Simply grab the nail, clamp down, and yank it out.

Read more here: How To Remove Brad Nails From Baseboards

How Do You Remove A Nail That Is Stuck?

There are several methods and tools for getting a stuck nail out. Some of them are obvious, like pulling with a hammer. But some might take a little know-how, requiring a technique or a tool familiar to experts.

There's no reason to waste time on the simple methods, but here are a few methods that offer a lot of success that a non-expert might not have heard of before. 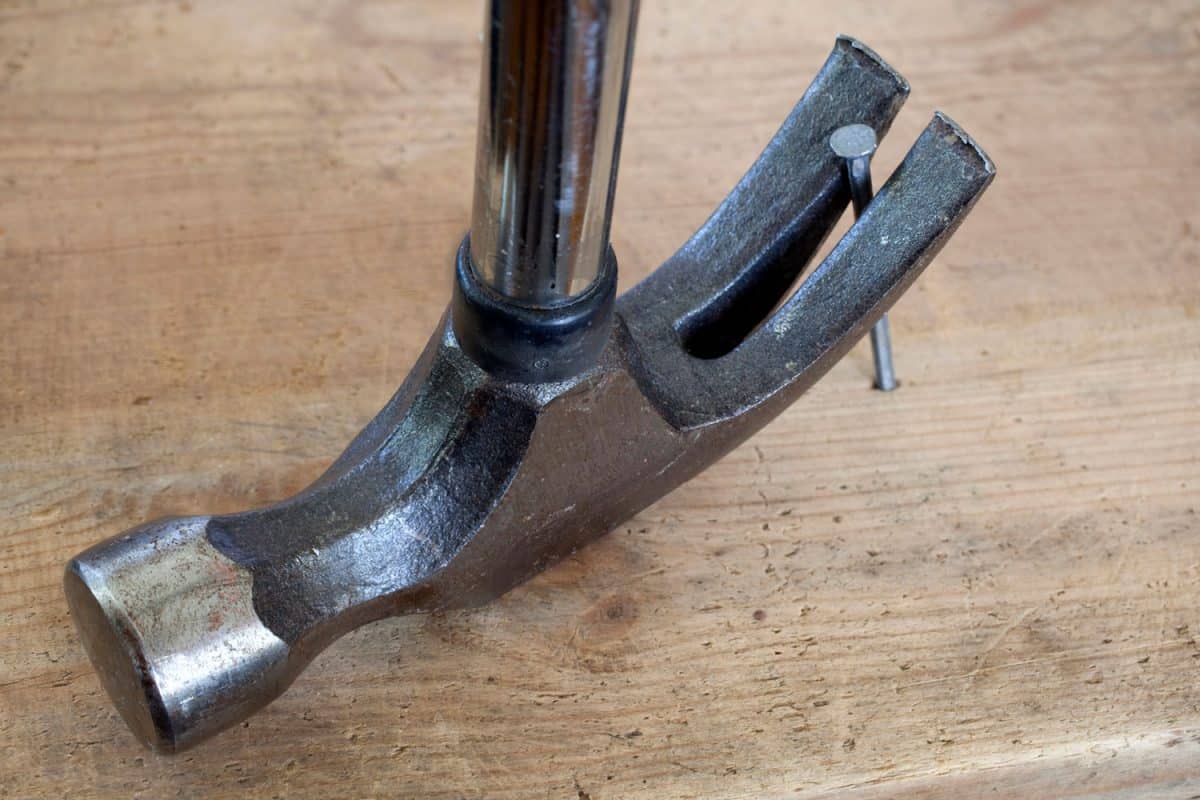 A hammer isn't the most powerful way to remove a stuck nail. But for most people, it's what they start with. After all, it's the tool already in your hand when you're driving in a nail.
Use the claw end of the hammer to grab the nail head. Then, rather than pulling straight out, rock the hammer sideways, letting the hammer claw pivot sideways. This maximizes the power of your pull, without breaking the nail or hurting your arm.
Be sure to work carefully - it's easy to leave a scuff, ding, or dent behind. If this surface needs to remain presentable, slip a piece of wood down as a buffer before you start twisting and pulling the hammer around.

Pry The Nail Out

A pry bar can also help get the toughest nail out, even one buried deep. The best pry tool for the job is called a cat's paw. It offers strength and leverage without requiring much brute force.

Of course, you still need to work carefully. Protect the surface, and put a thin piece of wood down before you start yanking.

A cat's paw just like this one is used for demolition jobs and in carpentry. It's so popular because it works!

Click here to see this cat's paw on Amazon.

If you really can't get the nail out, maybe the best choice is don't - just leave it in. Use a reciprocating saw to cut the nail instead. If you have a gentle touch, you can even avoid marking the wood.

Just be sure to hold the saw firmly. Chances are you'll be reaching into tight spots, which tends to pinch the blade. Be safe, work carefully, and hold the saw guard against the wood.

According to Family Handyman, it's best to use a blade with 10 teeth per inch. This kind of blade can cut through even the toughest screws.

Click here to see this saw blade on Amazon.

Use A Pin Punch To Deep Set The Nail

If you can leave the nail in, try pushing it further out of sight. Use a pin punch or nail set to drive the nail below the surface, making it less noticeable. On thin pieces of wood, like trim, you might be able to push the nail all the way through and pull it out the other side.

Click here to see this nail set on Amazon.

How Do You Remove A Nail Without A Head?

Many of the tricks and tools already mentioned for removing a stuck nail can also be successful on a nail with no head. But one last tool, particularly useful for removing a headless nail, is this one: the nail puller.

Not only can it grip a nail with no head, but it also functions as a nail cutter. Because realistically, sometimes the whole nail doesn't need to be removed. Sometimes, leaving the nail buried and simply taking the head off is actually the best action.

You can also use it to pull from the backside of the nail, like when removing nails from a piece of trim. This keeps the front intact, rather than trying to push a nail back out from the face of the trim.

No matter which approach you take, this tool will let you get the job done.

Click here to see this nail puller on Amazon.

Which Is Better: Brad Nail Or Finishing Nail?

Different nails are suited for different jobs - that's why there are so many kinds of nails at the hardware store, after all. Some of them have their use right in the name - roofing nails, for example.

Finishing nails have a small head which makes them ideal for places where a thin, discrete nail is important. Because they're a bit thicker than brad nails, they work when you need a strong nail with a small head that blends in - think furniture or cabinets.

Brad nails are a bit more slender, around 18 gauge. They leave smaller holes, which are less likely to split very delicate wood. Small, thin pieces of trim or molding are an ideal place to use brad nails. Also, because of the small head, there's less patching to do to cover ugly nail holes.

If you've decided to use brad nails, the next question before you start working is: What Size Brad Nails Do I Need? [By Type Of Project]

You can use the claw end of a hammer, a "cat's paw" pry bar, or just a pair of pliers to yank brad nails out with relative ease. Getting them out isn't the hard part - it's not damaging the surface while you do it. To keep from scuffing or, even worse, leaving a hole, always protect the area with a thin piece of wood or a putty knife. Then, you can lever the nail out without ever letting the tool scrape the surface.

If you have a lot of nails to pull, it might be worthwhile to invest in a special nail puller. This grips nails tightly, letting you pull from any side, and can even get a hold on nails without a head.

How Big Is A Deadbolt? [What Size Hole To Drill?]

How to Reset a Brinks Keypad Door Lock

Does Floor Have To Be Level For Vinyl?