You won't usually see PEX pipes that are directly exposed to sunlight. These plumbing materials cannot take the sun's heat, which can bring about their premature deterioration. If you don't have any choice but to have some parts of your water pipes exposed outdoors, what can you do to protect them from the harmful rays of the sun? That's what we asked the experts, and here's their reply.

You can protect your PEX pipes from sunlight by burying them underground, encasing them inside a bigger pipe, or choosing PEX pipes that have been coated with UV inhibitors.

You can also cover the pipes with UV-blocking materials such as opaque plastic sheets, dark polyethylene bags, and latex paint that has UV protection.

Keep on reading to understand better why you need to protect your PEX pipes from sunlight and what you can do to prolong their lifespan. This article will also cover how long these pipes are expected to last outside and if there are UV-resistant PEX pipes out there. Let's begin! 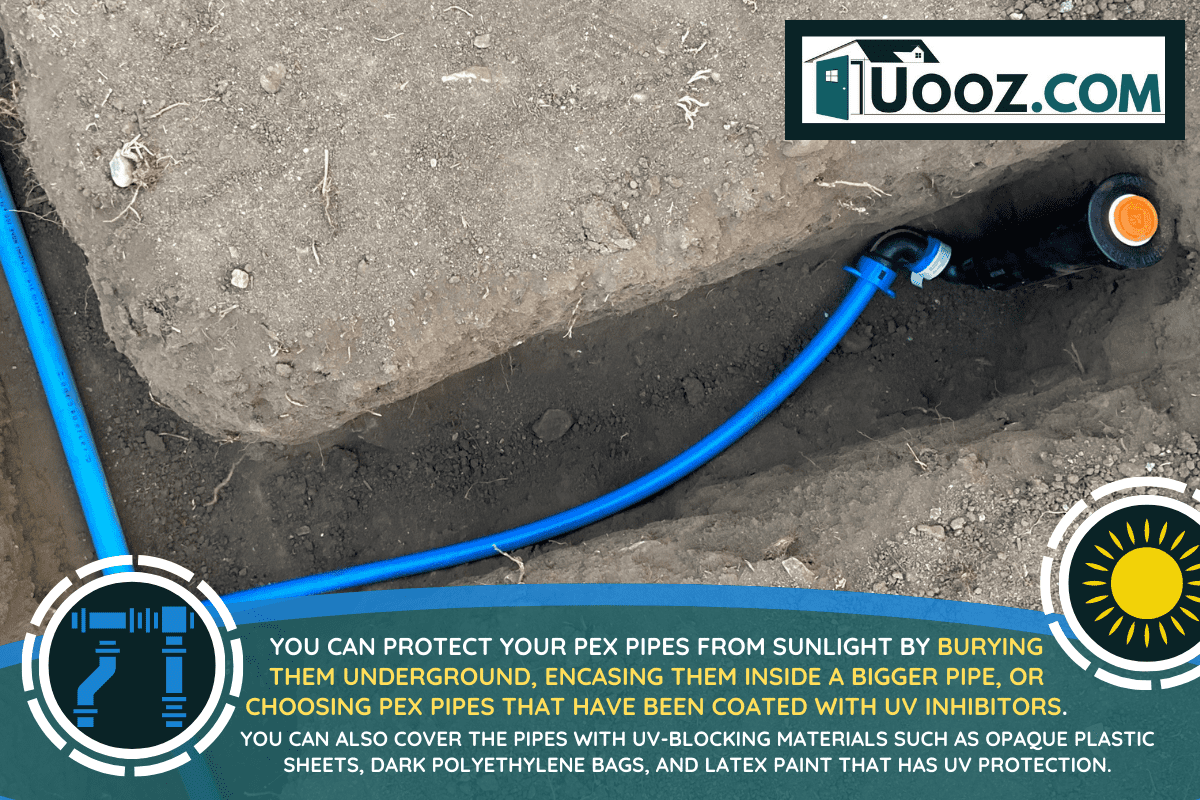 PEX or cross-linked polyethylene pipes have become a popular choice for residential plumbing. These pipes are as long-lasting but not as expensive as copper pipes.

They are flexible which makes installation so much easier, eliminating the need to solder just to connect different parts and it also means fewer joints, and fewer chances of leaks! 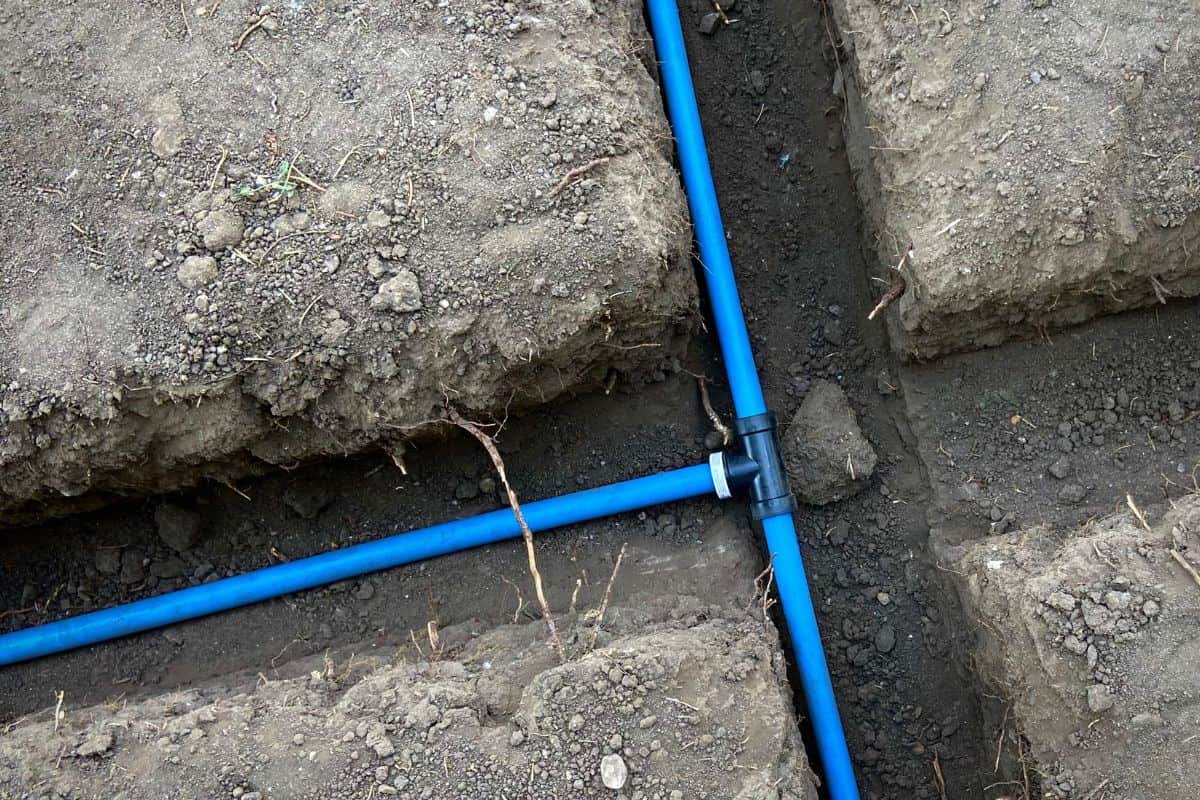 PEX pipes can also expand, so they can accommodate water's expansion when it freezes during winter, and then they'll go back to their original size when the water thaws. Other piping materials burst when water freezes, so this is definitely a huge advantage of PEX pipes.

However, there's something that you cannot do with PEX pipes. You cannot expose them to direct sunlight. They are not recommended for outdoor use. They won't be able to stand high heat.

This is because the sun's harsh UV rays are extremely damaging to these pipes, which would significantly weaken their structure and reduce their lifespan. This means you would have to deal with water pipe problems sooner rather than later (or ideally, never).

And this problem isn't even exclusive to sunlight. It also includes artificial lights used at home, such as your LED and fluorescent bulbs because they also emit UV light.

This is why you would also see PEX pipe manufacturers advising users not to install these materials within five feet or directly exposed to these lights as well.

So it is not just sunlight (although it is the main source of UV light) but also other artificial sources of UV radiation that can hurt PEX pipes. Thus, you shouldn't expose the pipes to these elements to be able to enjoy the benefits that PEX pipes offer in plumbing.

What do UV rays do to PEX pipes? 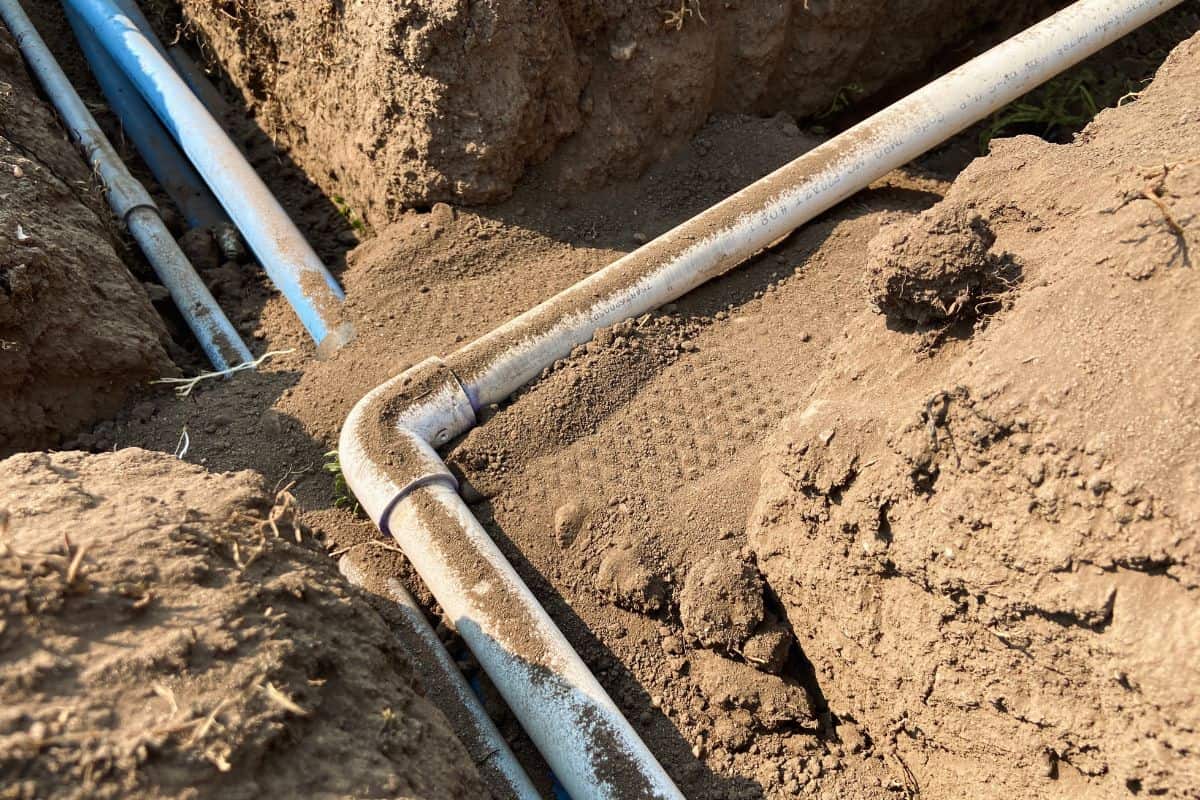 Technically, UV rays don't damage your PEX pipes. Ultimately, it is chlorine that causes these pipes to become brittle and lose their flexibility and strength over time. What UV rays do to your pipes is cause the breakdown of their chlorine-blocking antioxidants.

Without this protective property, chlorine can actively attack the pipes' surface, which leads to the pipes' deterioration and eventual failure.

This is what we're trying to avoid. Chlorine induces oxidation in PEX pipes which leads to the breakdown of the material's molecular bonds. As the degradation happens, there'll be cracks on the pipes' surface that would cause water leaks and further damage.

Since chlorinated potable water constantly runs through these pipes, they are always exposed to this element, which would affect their quality if they don't have their anti-chlorine properties which UV exposure threatens to eradicate.

Exposure to UV rays, whether directly from the sun or from artificial lights, will hasten the degradation of PEX pipes' chlorine-blocking properties. And as the pipes lose this attribute, they become vulnerable to chlorine attack.

During the manufacturing process, PEX pipes have been added with UV inhibitors so that they can continue to resist chlorine's adverse effects in case they are exposed to sources of UV radiation.

That's why it is important to minimize their exposure to UV rays. But sometimes, homeowners and contractors have no other choice but to have some parts of the PEX water pipe system exposed outside.

In cases like this, they should be given the best possible protection so that you can extend their lifespan.

Ways to Protect PEX from Sunlight 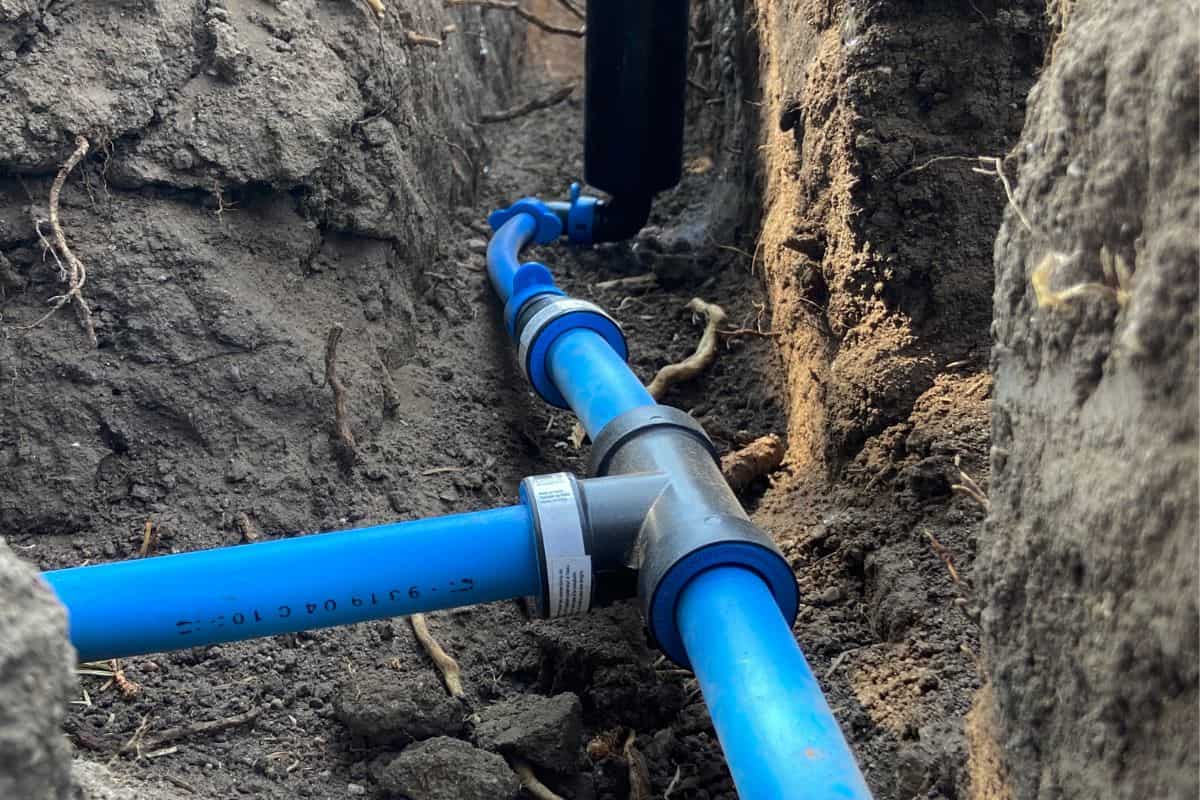 Here are some tips from the experts on how you can protect your PEX pipes from the harmful rays of the sun other than burying them underground where the sun's UV rays can't reach them.

Check out this PEX stub-out bracket on Amazon.

These are the recommended ways for you to shield your PEX pipes from UV rays so that they will last longer.

When purchasing PEX pipes, it is also important to check how the suppliers store their stocks so that you're sure that they aren't exposed to sunlight or even artificial lights that can cause the degradation of their quality even before you start using them.

If you've already bought PEX pipes to be used for your plumbing system but the installation has been delayed, you would also need to protect them against sunlight. Store them properly. Otherwise, they might be damaged prematurely due to UV exposure.

In other words, PEX pipes need to be protected from exposure to UV rays at all times, not just during installation.

How long will PEX last outside? 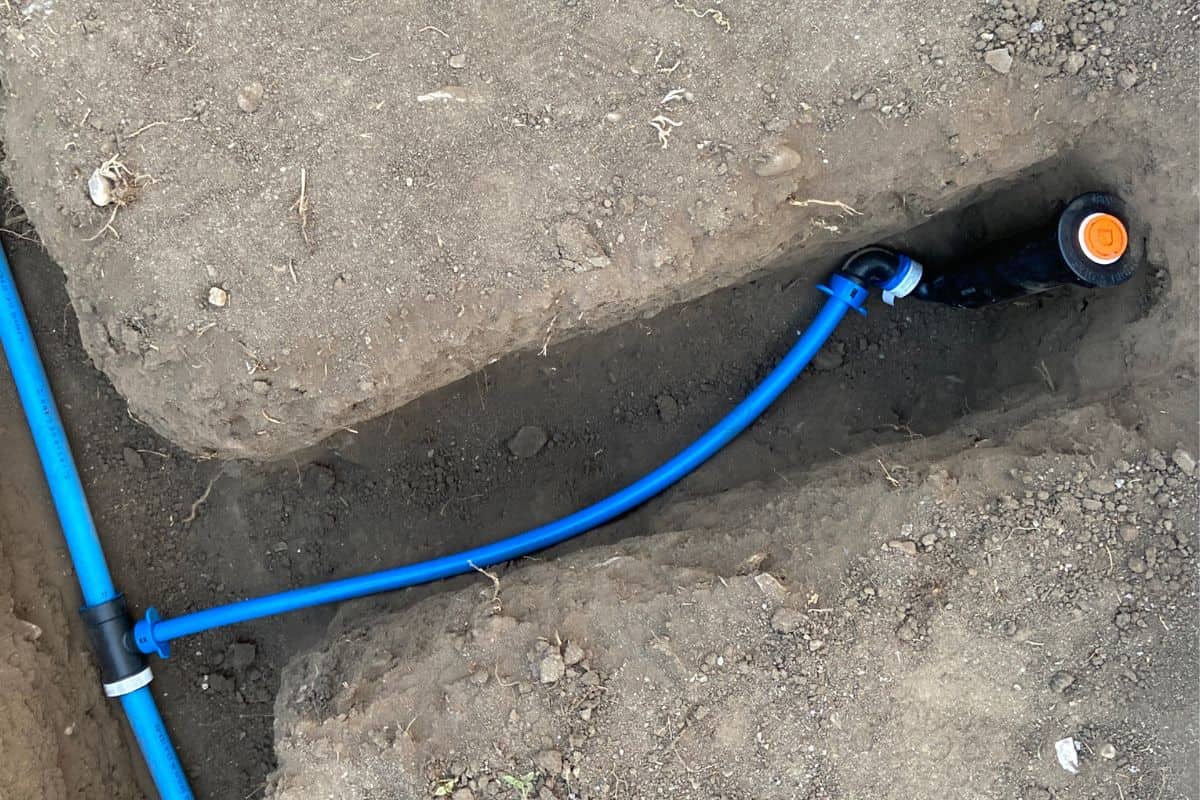 On average, PEX pipes have a life expectancy of 50 years. But this is based on the assumption that these pipes aren't used in areas where they would be exposed to direct sunlight or UV light.

As discussed above, UV exposure would cause the breakdown of these pipes' chlorine-blocking properties and when this happens, chlorine would attack their surface until they eventually become weak and show signs of damage.

This highlights the importance of giving your PEX pipes proper protection against UV rays, especially if you have to use them outdoors. This way, you can expect them to last as long as their estimated lifespan so that you can make the most of your investment.

On the other hand, it also means that if the PEX pipes are exposed to these harmful rays without any form of protection, they aren't expected to last long because they would deteriorate quickly.

Manufacturers are required to have their pipes tested and certified so that users would know their level of UV resistance.

This is in accordance with ASTM F2657 wherein these products would undergo standard test methods to receive their rating. They will receive ratings from 0 to 3 and the maximum UV resistance is up to six months only.

This means that even if you get a PEX pipe with the highest rating, the most that you can expect it to be in great condition is six months when it is exposed to extreme UV light emission. After this period, its quality would begin to decline and pipe failure is waiting to happen.

Is there a UV-resistant PEX pipe? 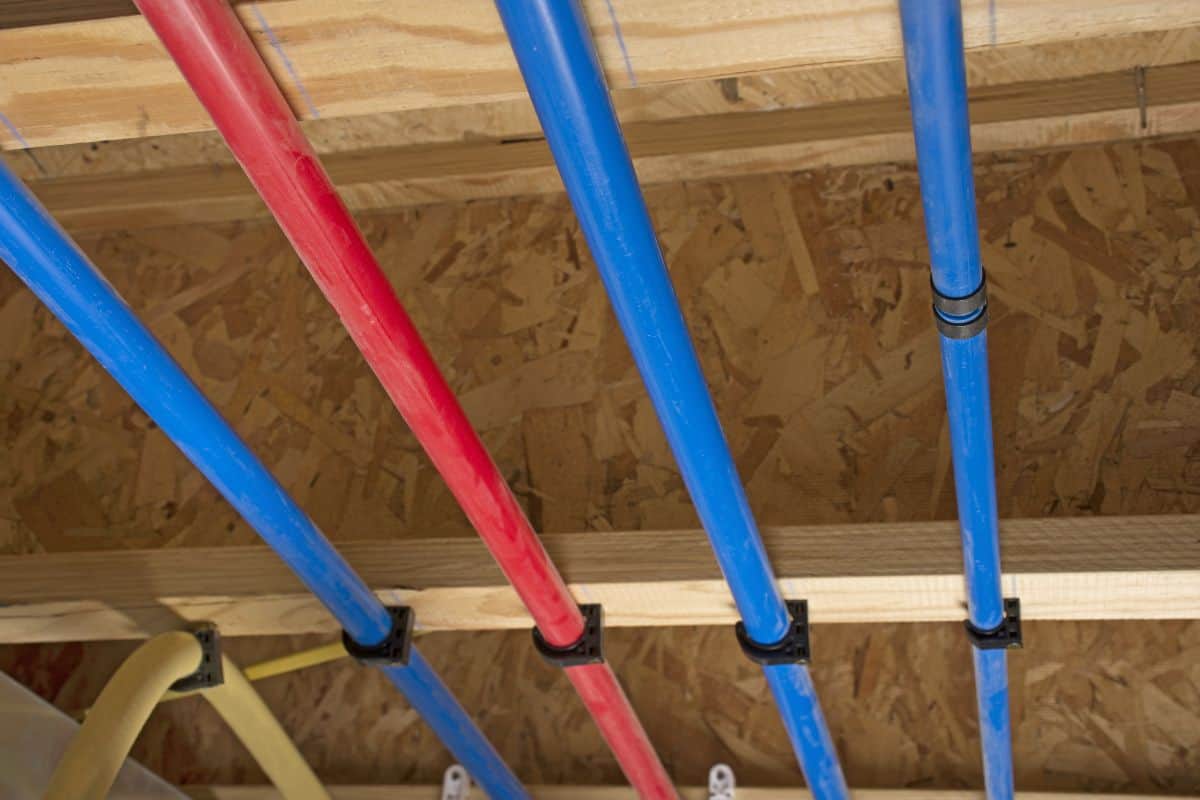 Considering all the benefits the PEX pipes offer plus their affordability, consumers would naturally be inclined to use them for their residential plumbing lines.

But after knowing about the harmful effects of UV exposure, one would wonder if there are UV-resistant PEX pipes to counteract this main drawback of using PEX material for plumbing.

As stated earlier, PEX pipes undergo standard tests to determine their UV resistance level. Buyers would be informed about these ratings as they are required to be printed on the labels and tubes. PEX pipes are given a four-digit designation code and the second digit indicates their UV resistance rating.

You will find PEX pipes with the highest rating on the market. These are the ones recommended for outdoor use. Some even intentionally make their outer coating dark to enhance their protection against the harmful UV rays.

However, be cautious about these products because even the highest rating would only guarantee up to six months' protection when the PEX pipes are subjected to extreme UV ray exposure. In this case, their ability to resist UV radiation is only limited.

Make sure your PEX pipes have something to shield them from UV rays if they have to be exposed to sunlight or other sources of UV radiation. This will ensure that their chlorine-blocking antioxidants are intact and you can safely use your pipes at home.

To read more about related topics, feel free to visit the following posts:

Can PEX Pipes Freeze And Burst? What homeowners need to know

Does PEX Plumbing Need To Be Grounded?

How To Remove A Pebble Shower Floor

How Far Apart Should The Floor Joists Be?

How To Cut Ceiling Tiles? [4 Steps]

How Long Do House Foundations Need To Settle?