Are you ready to tackle your first DIY shower project? Before you begin, you will need to know precisely how to install a shower base on a concrete floor. To make things easier, we delved deeper into the subject to find the best techniques and answers to possible questions you may have. See our findings below.

First, you should know that many people use the terms "shower base" and "shower pan" interchangeably. However, they are two separate entities. To install a shower pan or tray on top of a concrete base, you will need to ensure the concrete is clean and level, then follow these steps:

Now that you know the basic steps to install a shower base on a concrete floor, it's time to learn the details of each step. Keep reading for detailed instructions on the process along with answers to popular questions such as how to measure for a shower base, how to waterproof a shower base, and more. 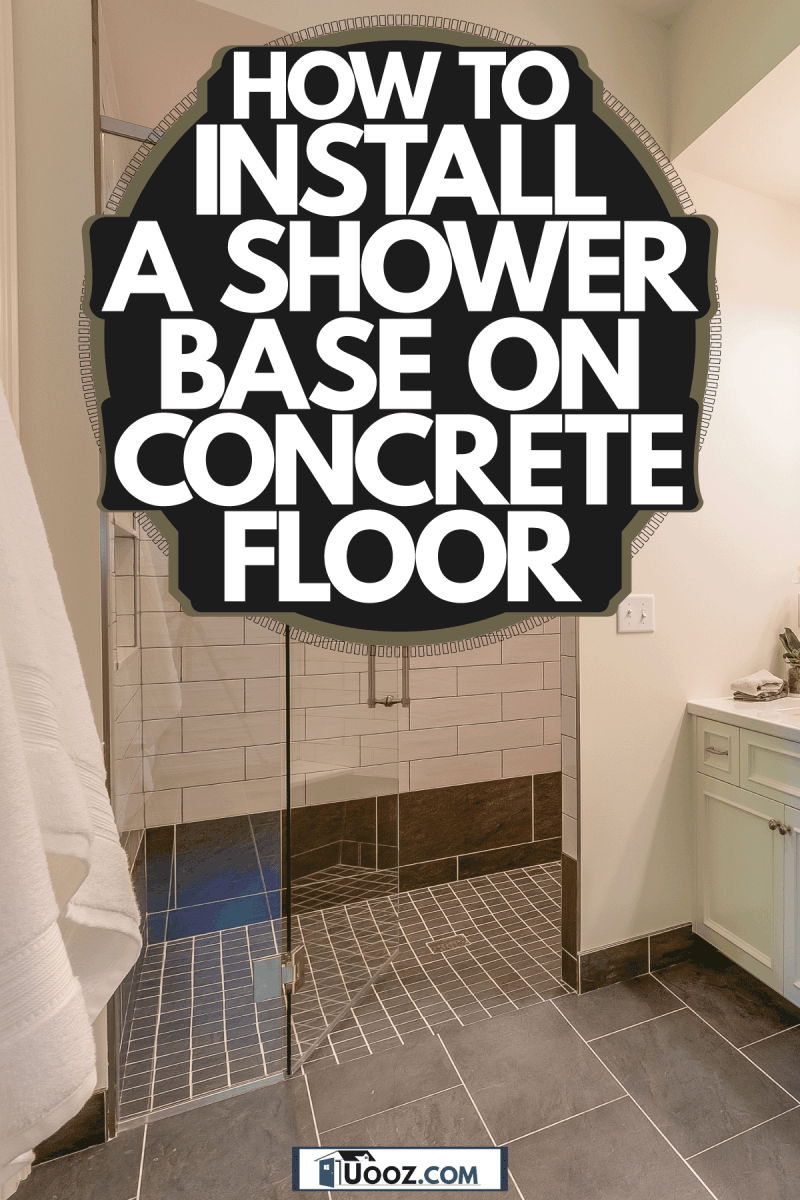 How To Install A Shower Base On Concrete Floor

When you're ready to install a shower in your bathroom, it's essential to do it correctly. Therefore, you need to understand that the shower base is not the same as the shower floor or pan.

The shower floor on which you stand is known as the shower tray or the shower pan. This is typically a premade vinyl or fiberglass tray that is situated on top of the shower base.

If you plan to lay tile on your shower floor, you will need a special shower pan. Otherwise, the tray will not hold up to the tiling process. You should also keep in mind that tiling directly onto the concrete subfloor is not a good idea.

You can find leveling compounds on Amazon.

Next, take your shower pan, and place it over the concrete, marking where the drain will be located. Place the pan to the side and remove enough concrete to create space for the drain pipe. Place the pipe in the hole, ensuring that it does not interfere with the level of the shower tray.

Replace the pan on top of the pipe and waste drain, pouring some water on the tray to make sure it drains properly with no leaks. Once you're sure the drain works, it's time to place it to the side again and start the installation process. 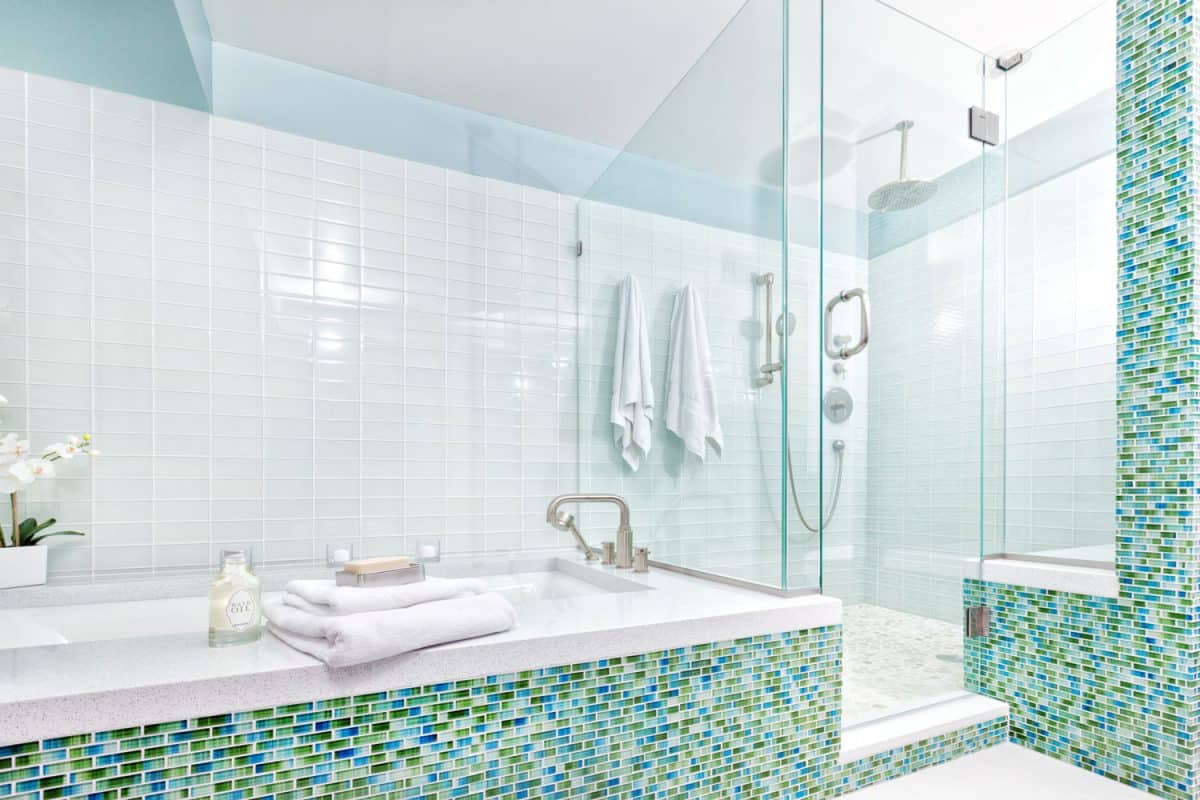 Apply a layer of mortar to the concrete base, completely covering the section where the shower tray will be situated. Place the pan over the mortar, pressing firmly. Using a leveling tool, make sure the shower pan is level on all sides. Screw the drainage tray into place. Allow the mortar to dry for 24 hours before adding the shower walls.

Once the walls are in place, use silicone to seal the cracks between the shower tray and the wall panels. Let it dry for an additional 24 hours before using the shower or installing the enclosure.

You can get silicone on Amazon.

How Big is a Shower Base?

Shower bases will vary, depending on the size of the bathroom. There are generally three sizes that will fit most houses, and they include standard full size, larger full size, and half baths.

A standard full-size shower base (pan) is typically 30"x 60". This size is adequate for most residential showers without having to make any major adjustments.

Check out this standard full-size shower pan on Amazon.

Some homes feature showers that are just a bit larger than the typical standard shower. These larger full-size showers are generally 42" x 60".

Check out this larger full-size shower pan with a bench on Amazon.

If you are dealing with a half bath instead of a full-size bathroom, the shower area will be much smaller. Half baths will often contain a square shower tray of approximately 36" x 36" or 32" x 32". The size, however, will depend on the size of the bathroom itself. You can customize the size of your shower pan to fit your individual needs.

Check out this half-bath shower pan on Amazon.

While you always need a shower base, it is not always essential to have a shower pan. In many cases, however, it's a good idea to use a shower pan to keep from ruining your subfloor since the shower tray provides a waterproof barrier between the two. If you want a tile floor in your shower, on the other hand, laying a shower pan is a must.

Do You Waterproof Under a Shower Base?

When working with a concrete base, it is not necessary to waterproof under the shower pan. Mortar and silicone will be sufficient. However, if your shower base is made of wood or other materials besides concrete, you will need to waterproof it under your shower tray. This can be accomplished by using a shower liner.

Check out this shower liner on Amazon.

You can see a tutorial on installing a pan liner on YouTube.

How Do You Measure for a Shower Base?

If you have a large enough piece of cardboard lying around, this is one of the best ways to measure your shower base. Mark the desired size on your cardboard, and cut it out. Don't forget to mark the setting for your drain. Place it where you plan to install your shower pan. Now, using a tape measure, measure the cardboard.

If you are replacing an existing shower tray, you will need to remove it before measuring to get an accurate size. Once you have removed the tray, measure the sides. If you still have the box in which the original shower pan came, you can check it for precise sizing.

Should You Install Your Own Shower Pan?

Whether or not you should install your own shower pan depends on how much experience you possess. If you are an experienced DIYer who has done many projects, including plumbing, installing a shower pan shouldn't be a problem. However, if you don't know how to use the tools or plumbing basics, it is probably best to hire a professional to install your shower.

If all the plumbing is already intact, you may be able to properly install your shower pan without any trouble. However, you will need to know how to use a level, leveling compound, and mortar. Watching the attached YouTube video will also be helpful. However, when in doubt, consult an expert.

Although installing a shower pan on a concrete base may seem daunting, it is pretty simple. It is important to remember that the base and the pan are two different things, and you are likely referring to the pan instead of the base. You will need to ensure your drainage pipes are appropriately placed and the base is level and clean. After that, it's as simple as adding mortar and silicone.

Our blog has plenty of helpful tips. Check out these other posts about showers that may interest you:

Should You Tile the Floor or Walls First in a Shower?

Where Should the Drain be Placed in a Shower?

Can You Epoxy a Shower Floor?

What Does A Triangle On A Tape Measure Mean?

How Hot Can Galvanized Pipe Get?

How Many Screws Per Cabinet Do You Need?

Can You Use Drano On Copper Pipes

Can You Use Carpet Underlay For Wooden Flooring Or Laminate?