Nail pops on the roof can cause a host of problems, including leaks and reduced insulation. The unprecedented opening can also invite pests to enter your home. So how can you fix roof nail pops? We researched a possible solution for you, and here's what we found.

The process to repair nail pops on roofs often depends on the severity of the problem. For instance, the steps to fix a nail that slightly popped up are:

1. Carefully fold or remove the shingle with a crowbar. 2. Set the crowbar over the offending nail and pound both items with a hammer. 3. Use an adhesive sealer to return and secure the shingle to its original place.

As for more serious nail pops, here are the steps to solve this issue:

1. Remove the popped nail with the hammer claw. 2. Replace the damaged shingle with a new and exact unit. 3. Hammer a new nail 1-inch above the position of the previous nail. 4. Slightly lift or fold the shingle and apply ½-teaspoon of asphalt cement. 5. Apply another layer of asphalt cement over the new nail to seal the installation.

It's also best to understand how nail pops on roofs occur. Continue reading as we talk about the reasons why these problems happen. We'll also tackle the steps to repair roof nail pops in greater detail. 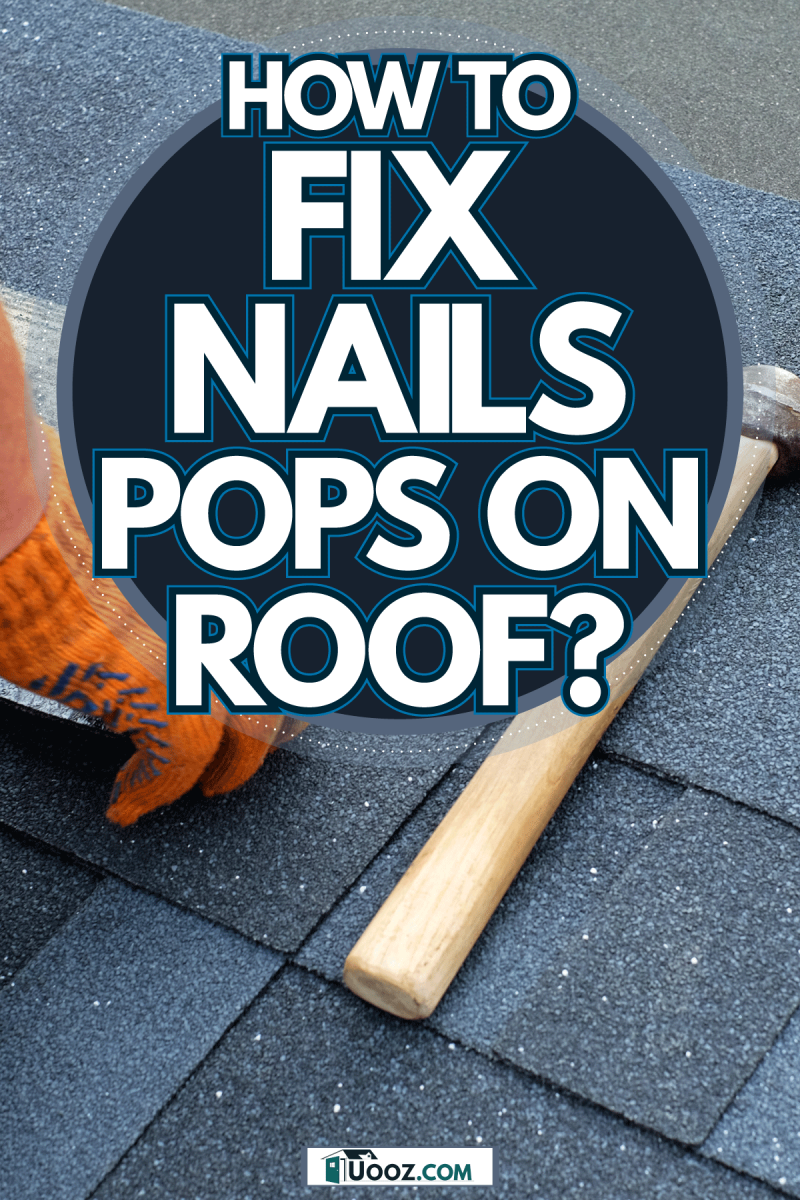 What Is A Roof Nail Pop?Where Should HVAC Vents Be Placed?

Also called back-out nails, homeowners can spot roof nail pops because of the tent-shaped rise on roofing shingles. Nails will typically push from below, causing the deformity. Driving down the nail once again without fixing the broken shingle may not provide a long-term fix to this problem. 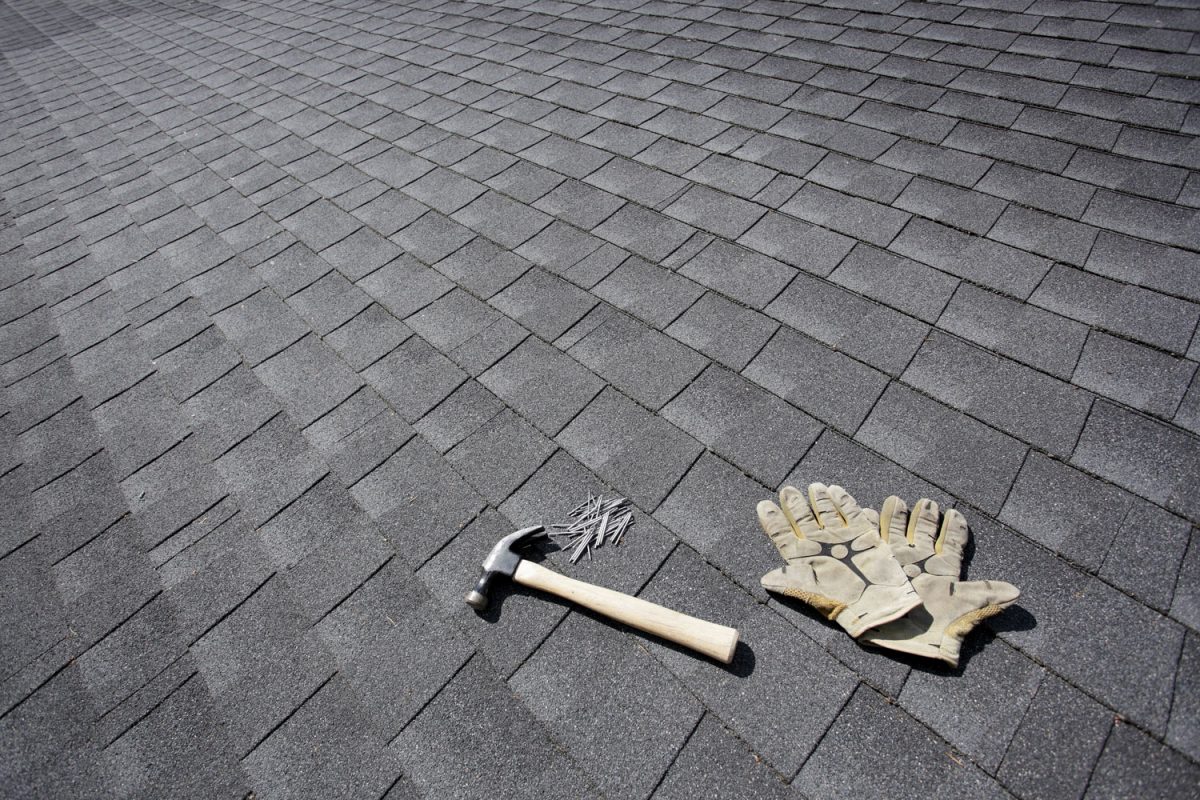 Sometimes it can be tough to see nail pops on a roof because the bend or damage is reasonably low. So it should be proper to scrutinize the entire roof for nail pops instead of looking at it from afar.

Learn more about what nail pops are and what they look like by viewing the short video below:

What Causes Nails To Pop On Roof? 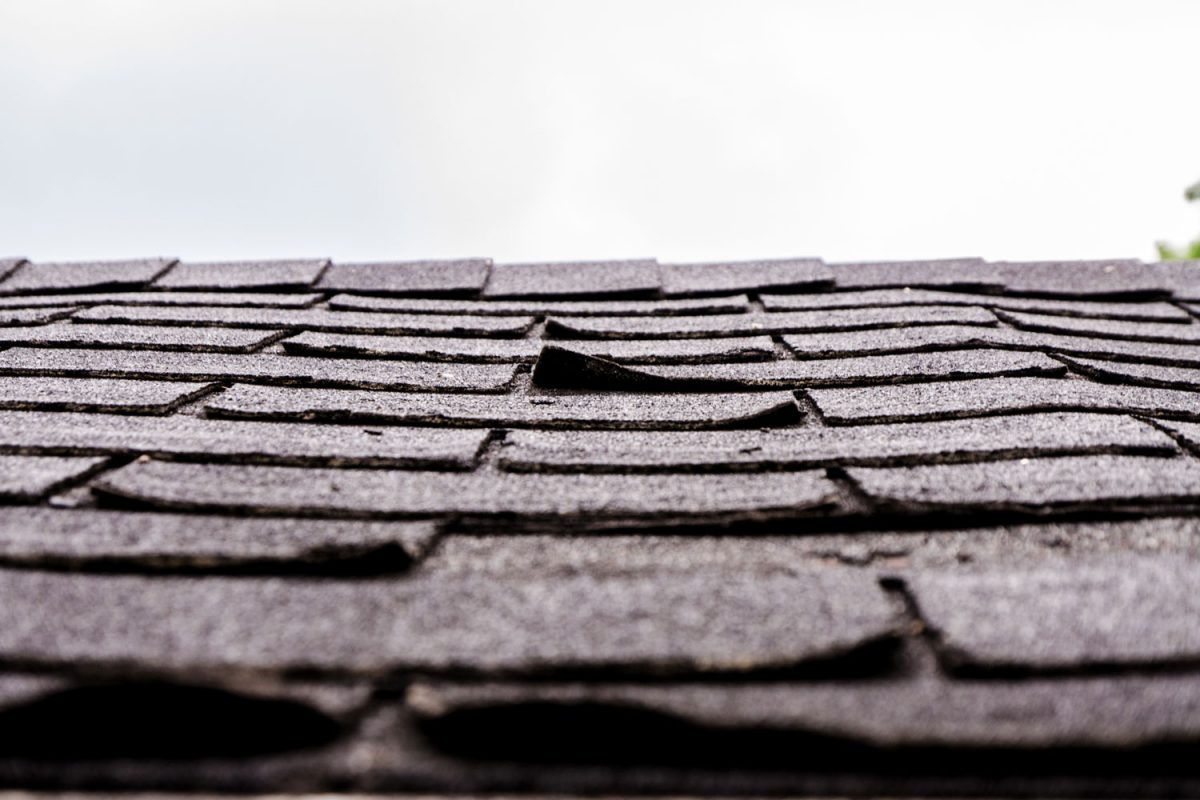 Improper installation for roofing components, such as shingles, can be the primary cause of nail pops. However, these problems can also appear because of other possible reasons. Some of these potential causes are:

Oftentimes, usage of the wrong roof nails can lead to nail pops. The International Residential Code (IRC) section R905.2 Fasteners indicates that shingles should use roofing nails made of an appropriate material like aluminum and galvanized steel. Also, the nails used should be 12-gages, at minimum, with a 3/8-inch minimum diameter for the head.

However, the IRC didn’t address the nail type or shank design of the recommended nails to use on roofing. It might be best to use ring shank nails to install shingles because these models generally have double the withdrawal resistance when compared to the standard construction nails.

Check out these ring shank nails on Amazon.

Take note that failure to comply with those guidelines can lead to higher than usual risks of nail pops on roofs. Skipping out on buying and using a suitable set of nails may invite additional problems to households.

At this point, you might find it interesting to learn about the waterproof properties of plywood or the lack thereof. If so, you can read our post on that subject matter to understand more about that roofing material.

Low-quality materials used for roof decking can also cause nails to poke through the sealed surface. Nail fasteners can slip, which can result in the nail pulling up. Regular inspections by going to your attic and looking at the exposed ceiling can help prevent nails from popping up.

Otherwise, a long-term yet expensive solution is to replace the roof deck with a sturdier material. If so, prepare to spend about $700 to $900 per square foot for the replacement job.

Plus, shingles need to follow a nailing pattern. Applying nails on the roof using a random pattern will put the materials used at the risk of problems like the nails failing to penetrate the deck properly.

Watch the video below if you’re curious and would want to know more about how to nail down roof shingles properly:

How To Fix Roof Nail Pops? 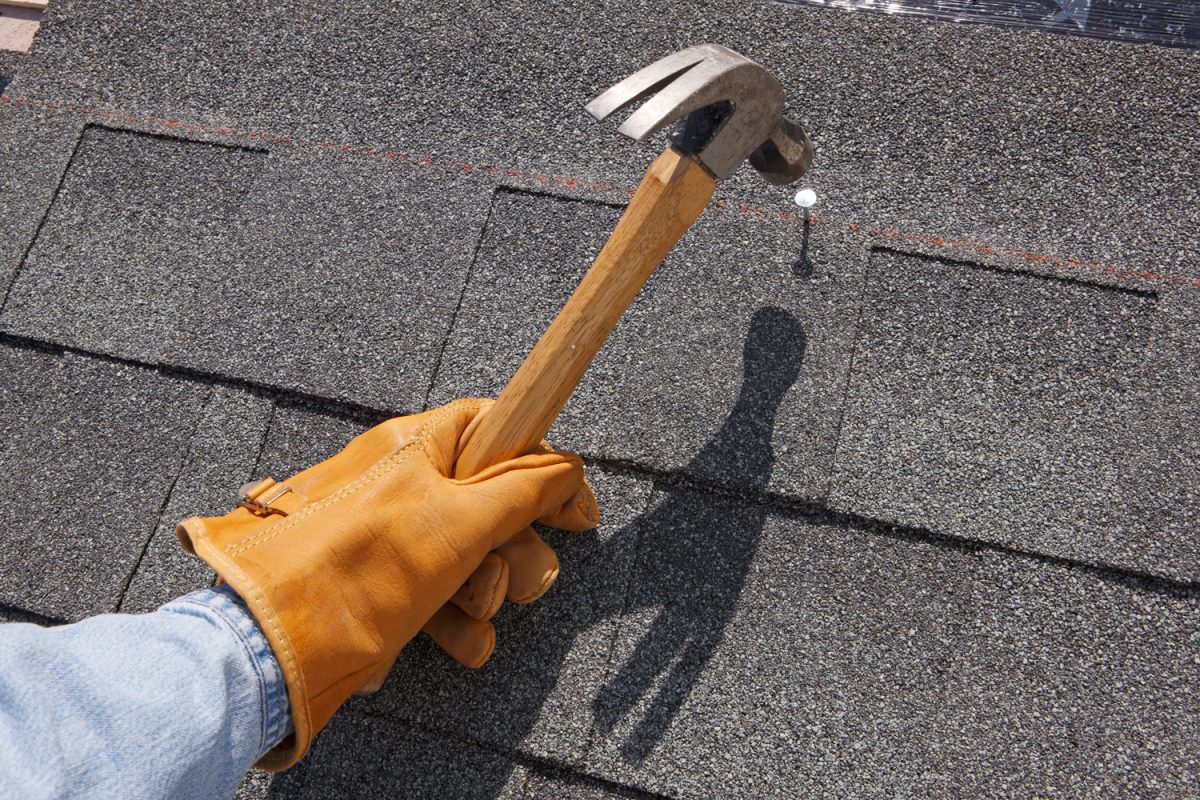 Before proceeding with any repair job on your roof, it’s best to practice proper safety measures. For instance, make sure to have an assistant holding the ladder as you climb it to reach the roof. Also, wear fitting footwear like safety shoes to ensure that your feet don’t get burned from stepping on the roofing’s hot surface.

Next, take note that the solution to repair roof nail pops often depends on the seriousness of the problem. In this section, you'll learn how to remedy this particular issue based on the condition of the popped-up nail.

Homeowners and DIY enthusiasts can use the following guide to return slightly raised nails on their roofs to their original positions:

Check out this roofing shingle adhesive sealer on Amazon.

1. Pry the offending shingles with a crowbar carefully. 2. Hold the popped-up nail down with the crowbar. Then, drive the nail down with a hammer. 3. Use the adhesive sealer to return the shingle to its original position.

You can also watch this video to look at the steps mentioned above in action:

Nail Broke Through the Shingle

If the nail broke through the roofing shingle, you might need to do more than use a hammer to return the nail to its original spot. Instead, this particular repair job might also demand the replacement of the broken shingle.

So you need to remove at least one piece of the damaged shingle and bring it with you to the store. Buy a new piece and return it to your roof. Keep in mind that you might need to buy more than one shingle if you find numerous popped nails on your roof.

Also, make your trip to the store quickly; spending too much time leaving your roof exposed may invite other concerns to your home. For example, pests like rodents and squirrels may take advantage of the new opening and claim the area under your roof as their new abode.

After getting the new shingle(s), carefully climb your roof and proceed with the next steps for this repair operation:

Check out this asphalt sealant on Amazon.

You can also prevent additional problems with your roof by sealing roofing nails. We have a guide on that topic so make sure to check that out.

What Is The Cost To Fix Roof Nail Pops? 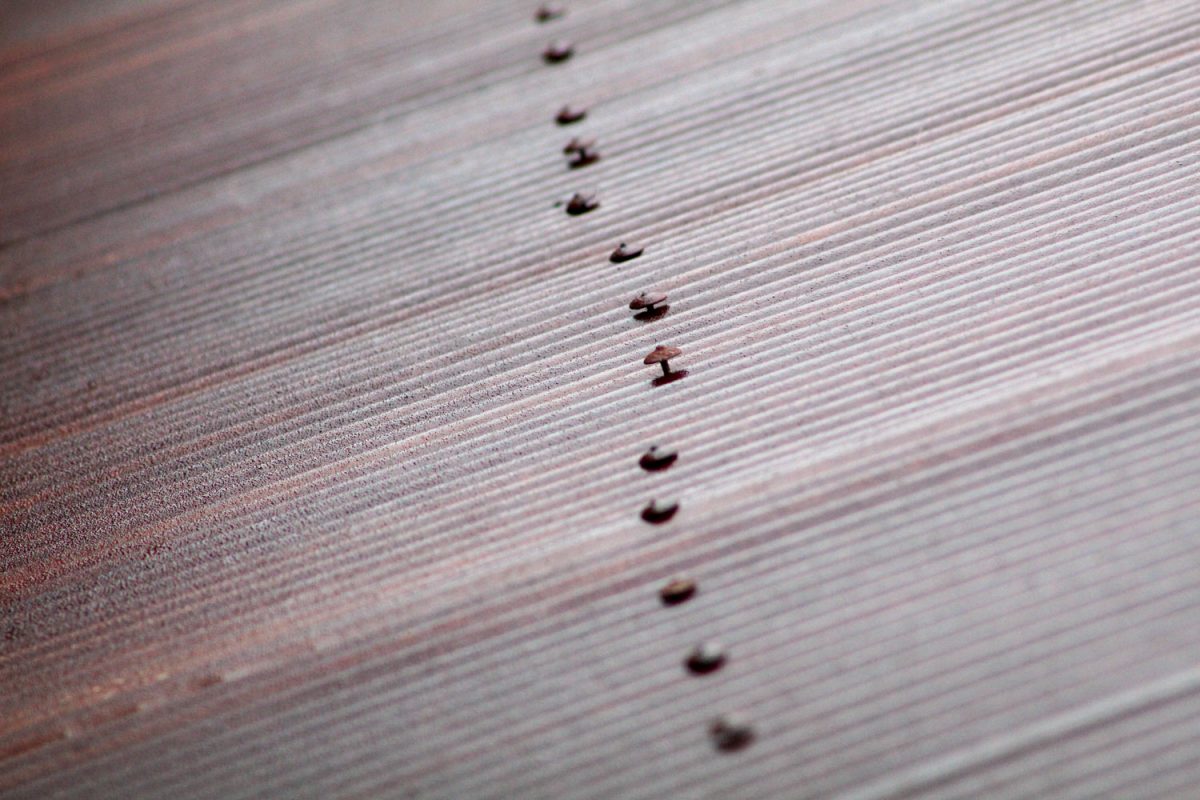 Take note that roof nail pops often lead to broken or damaged shingles. So the costs associated with fixing nail pops on roofs often fall under the category of shingle repair and replacement. For that reason, homeowners should prepare to spend approximately $10 to over $30 based on the severity of the concern.

Why Does My Roof Leak Sometimes?

Aside from popped nails on the roof, other causes of roofing leaks may include (but aren’t limited to) the following: 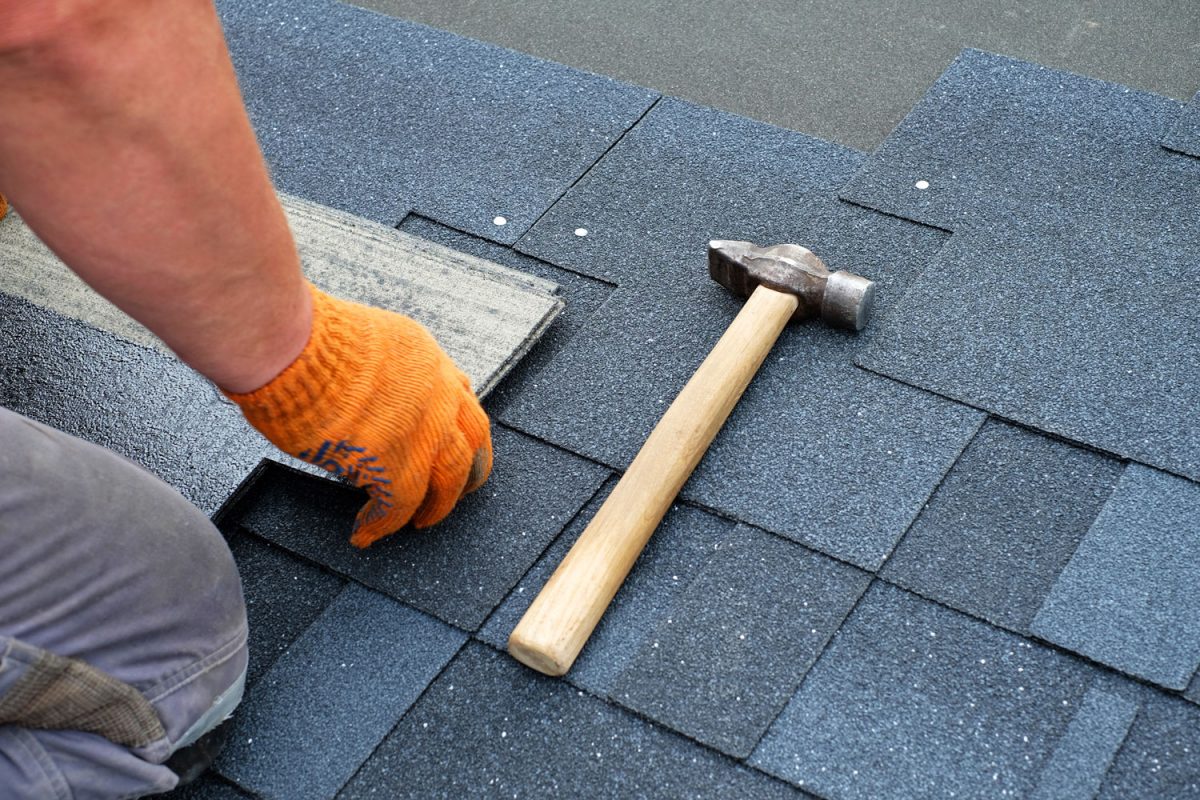 Nail pops on roofs can originate from different sources, including the use of low-quality roofing materials and nail gun usage. Applying the correct steps to fix the offending nails and/or shingles will help prevent increasing the risks of your roof contracting additional concerns.

How Big Are Brad Nails And How Deep Do They Go?

How Long Does A DeWalt Battery Last?

How to Clean Vinyl Siding Without Killing Plants

Kohler Engine Cranks But Won’t Start – What To Do?

How To Find The Model Number On A Canon Printer

How Much Water is Needed to Prime a Well Pump?