DeWalt drills are one of the more reliable tools you can own. They come at an affordable price. Plus, it's not too difficult to use. However, what can you do if the battery won't charge anymore? If that's your concern, let's discuss the details you should know.

DeWalt drills use lithium-ion batteries. If you didn't know, lithium batteries stop charging when you discharge them entirely. When this happens, you'll have to reset the battery. Unfortunately, you'll need a secondary battery to do this.

You may not have to go out and buy another DeWalt battery. However, resetting the battery comes with a few consequences. More specifically, it might not perform the same. These are some of the concerns we'll discuss in detail. To learn more, keep reading. 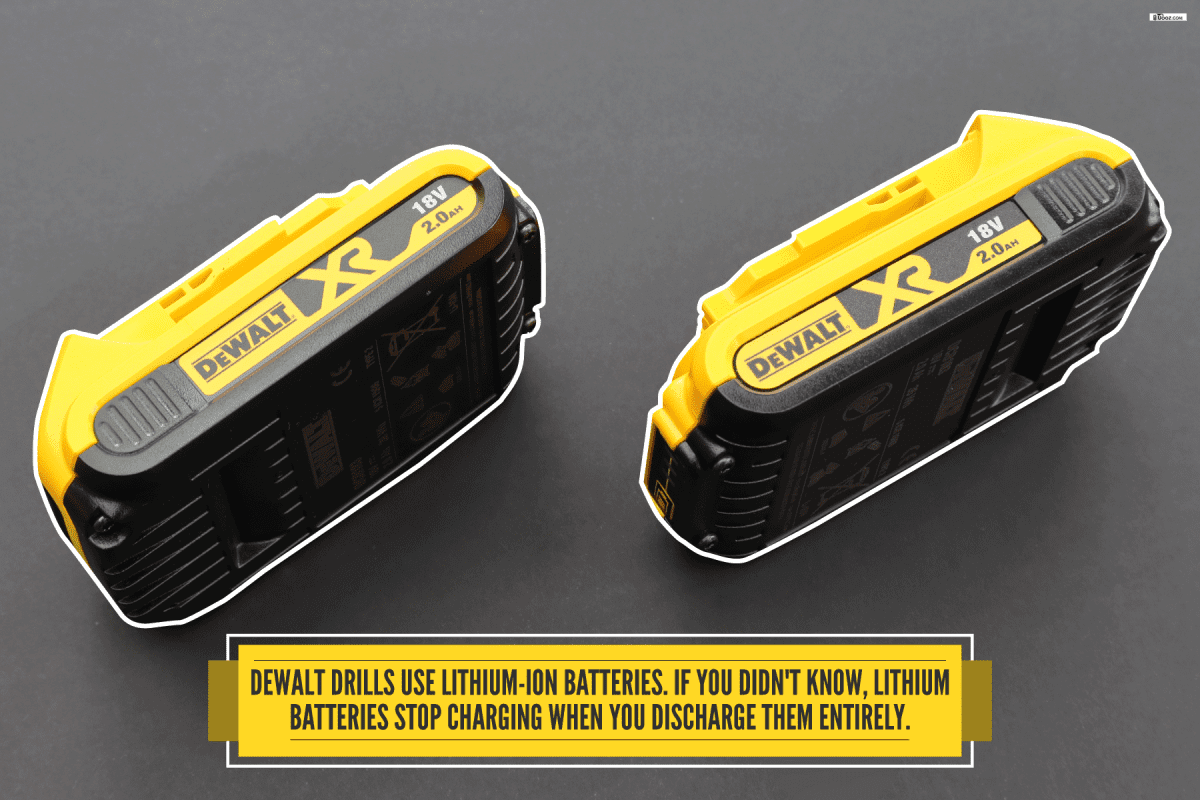 Why Does The Battery Not Charge?

You might not have intentionally discharged the battery, but that's a mistake you should avoid. Lithium-ion batteries do not like being in an undercharged state. Leaving it in this state can cause harm to the battery and you.

According to Battery University, lithium-ion batteries contain a protection circuit that turns them off when they become over-discharged. This circuit essentially puts the battery into sleeping mode.

So, let's piece together what might have happened to the DeWalt battery. First, you or someone else might have used the drill until it could no longer run. Therefore, it ran until the battery was at zero charge. 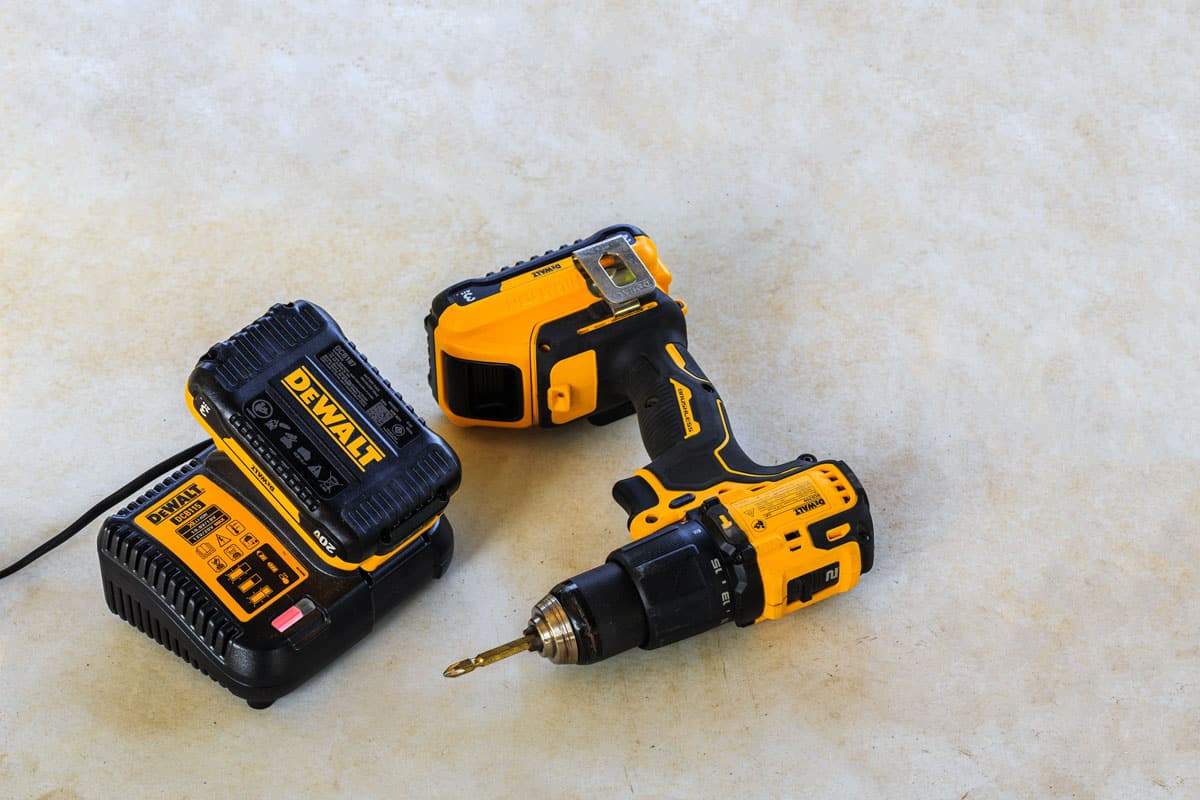 Alternatively, there could have been some charge left in the battery. However, all batteries continue to discharge even if they're not connected or delivering current.

Therefore, the battery eventually set itself into sleeping mode. It still has some charge left, but using it at this point comes with risks.

How To Reset A DeWalt Battery

Now we know the battery is in a sleeping mode of sorts. If you've attempted to charge it, there is one of two situations you might have witnessed.

If the battery is uncharged significantly, it will give you no reading. So, it won't read as charging when you slot it into the charger. Additionally, the fuel gauge button won't show you the charge left. 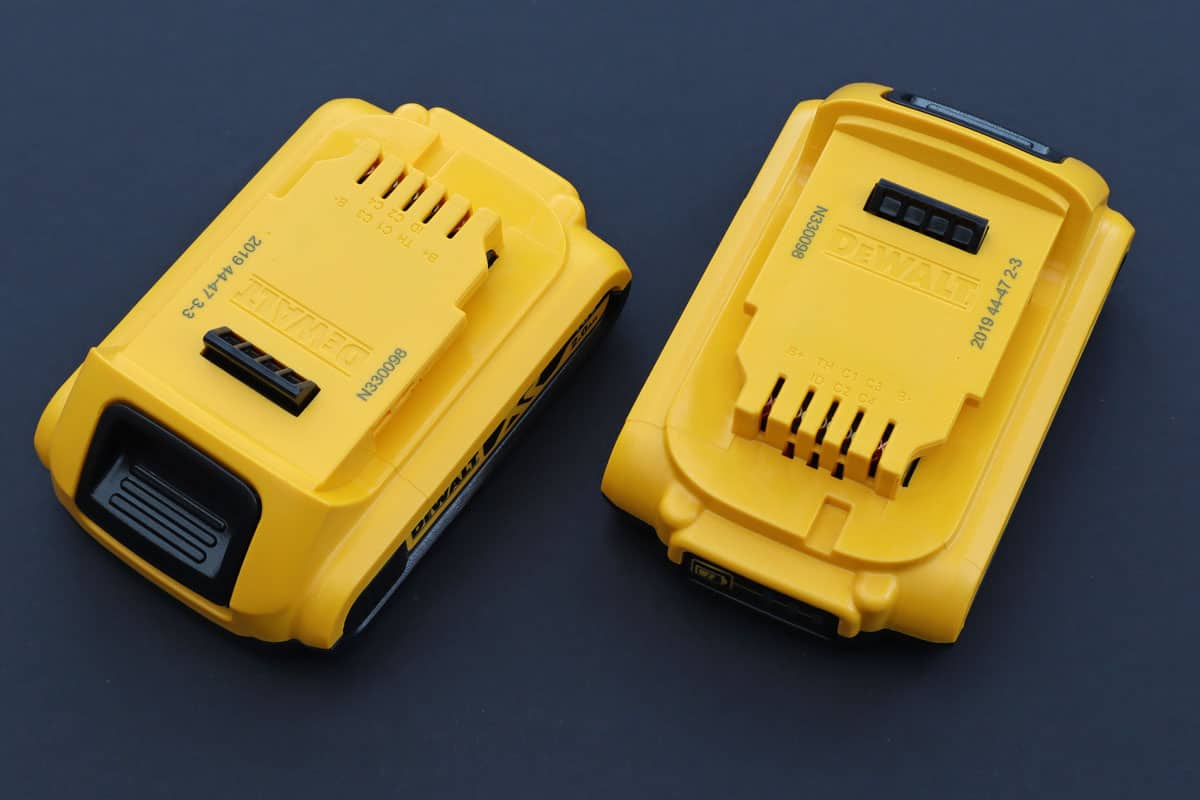 On the other hand, there could be a good amount of charge left. However, it's still too weak to function. You'll know this describes your situation when you slot the battery in the charger.

The charger will flicker a faint red light, but the flickering will stop shortly after. If we want to use the battery again, we'll need to add some charge to it without the charger.

We can get the battery working again using another fully charged battery and two wires. You'll essentially be jumpstarting the battery that won't charge.

If you don't have another DeWalt battery, call some friends or family and see if you can borrow it from someone. Once you have a second battery, we can start the recovery process. 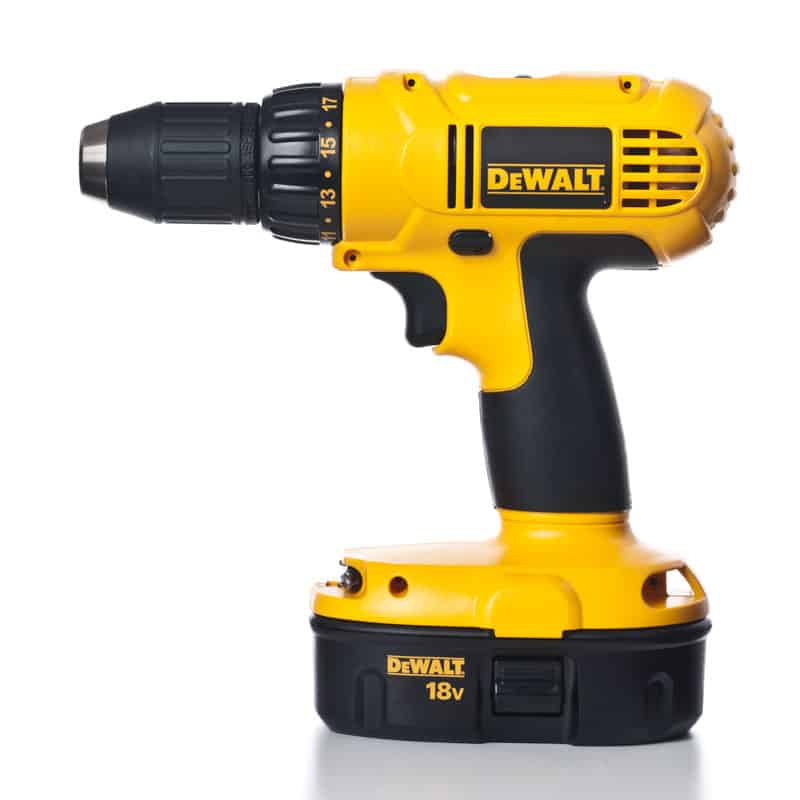 Take a look at the top of the battery. You should see some letters above the slots that go into the charger. The two we want to focus on are B+ and B-.

For this reason, be careful when connecting the batteries with the wires. In the best case, there won't be a spark at all. Instead, it will look like nothing is happening.

However, that's far from the truth. It will only take a few seconds for the functional battery to charge the discharged one. Let it sit for four to five seconds before pulling the wires out.

After four to five seconds, the discharged battery should have enough charge to function normally again. Nevertheless, it never hurts to test both batteries to see if the reset affected them.

Then, slot the discharged battery into the charger. The charger will display a bright red light if the reset is successful. If you're a visual learner, we'll include a video demonstrating how to reset the battery.

Signs To Look Out For

Your work is not over even if the battery is charging again. There's still a bit of uncertainty with this method of resetting the battery; keep a close eye on it as it fills to a full battery.

There's a reason lithium-ion batteries stop working after being discharged.

As Microbattery—a battery retailer—states: "Li-ion batteries should not sink below 2V/cell for any extensive period. Apart from triggering a sleep mode, it encourages the formation of copper passages, called shunts, which can elevate self-discharge. Subsequently charging the battery can cause the cells to become unstable, generate excessive heat, or display other aberrations."

In other words, the DeWalt battery will work, but it might not perform the same. As the battery charges, ensure the battery isn't getting overwhelmingly hot.

It will get slightly hot to the touch. However, a burning smell should not follow. The battery should not swell either. If the battery begins to show any of these signs, immediately stop charging it.

Ultimately, you'll need to dispose of it. It will be too dangerous to continue using. Accordingly, the EPA recommends looking for retailers that participate in takeback services.

How Do You Know if a Lithium Battery Is Damaged? 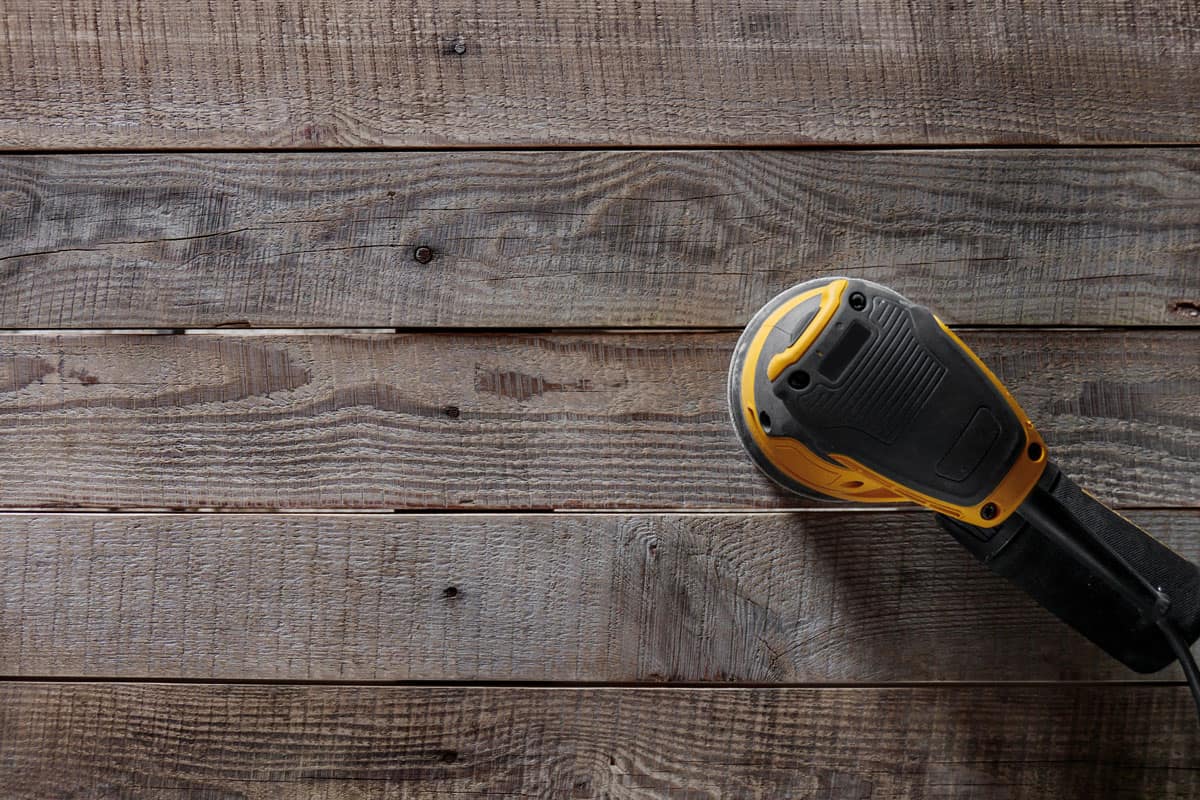 Apart from the more apparent signs, how can you tell if your DeWalt battery is damaged? It might be difficult to tell initially, but it will become noticeable once you use it.

First, the battery might have a decreased charge capacity. In other words, it won't run as long. DeWalt batteries can run for as long as 30 minutes to 4 hours. It depends on the tool.

Nevertheless, resetting the battery might cut that runtime down. Another detail worth noting is the self-discharge rate. When the battery is damaged, it will discharge faster.

If you leave it with a bit of charge, it might be dead the next time you want to use it. At this point, it's up to you to determine if it's worth keeping.

A decreased charge capacity is irreversible. So, if you want to run as long as it did before, you'll need to purchase a new battery.

Click here to see this DeWalt battery on Amazon.

How Long Are DEWALT Batteries Guaranteed For?

Over-discharging a lithium-ion battery isn't the only way it can stop working. It could be a rare case of a faulty battery. If you suspect it failed itself, you could submit a warranty claim.

DeWalt has a limited warranty for its batteries. Unfortunately, you only have 30 days. If the battery stops working within 30 days after the date of purchase, you can take it to an authorized DeWalt service center.

They will inspect the battery and replace it.

Can You Overcharge DeWalt Batteries? 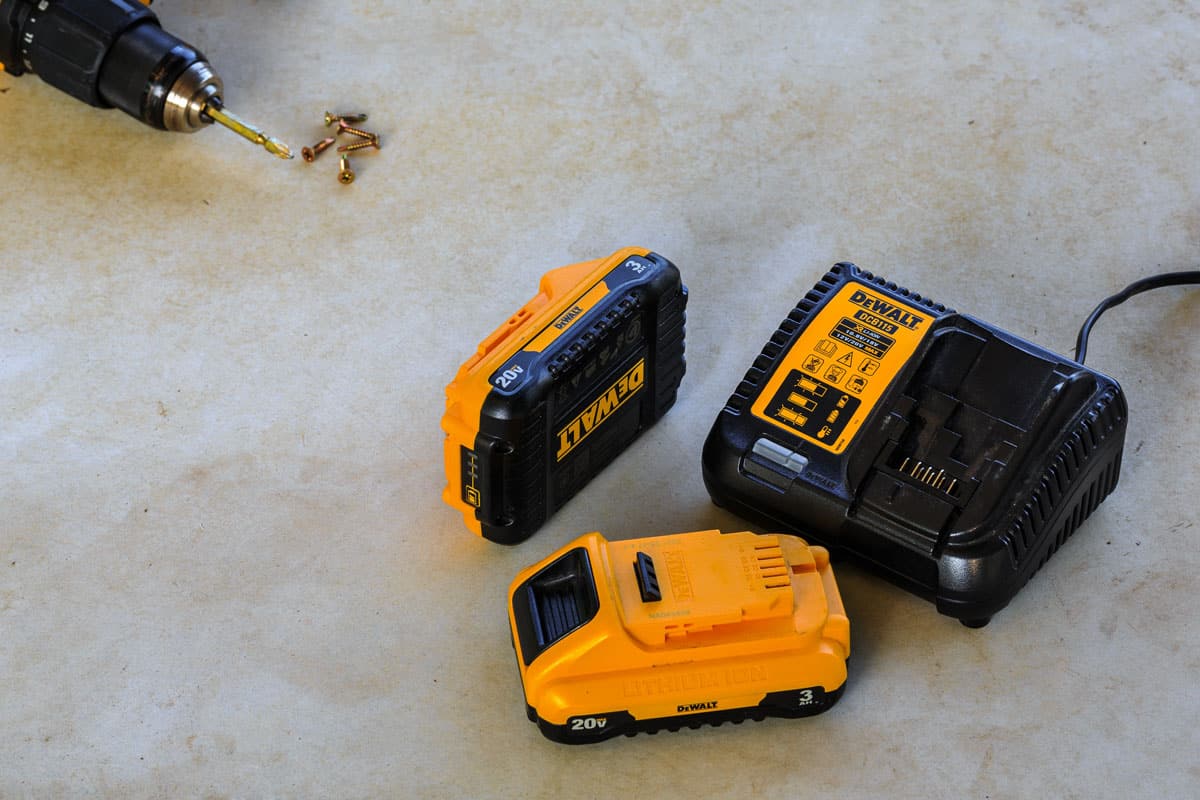 If you can over-discharge lithium-ion batteries, is the opposite also true? In most cases, yes. However, DeWalt claims their batteries have a maintenance mode.

Therefore, you can leave it charging in the charger if you'd like. It won't do any harm to it. DeWalt also mentions how quickly their batteries discharge on their website.

Within the first 24 hours, it will lose about 15-20% charge. On the second day, it will lose 7-10%. It will continue to lose 1% each day afterward. So, if you rely on your power tools, it might be better to leave them in the charger.

If you want to get the most out of your battery, let's discuss a few practices DeWalt recommends. First, run it through a typical day of usage.

Once you can see a decrease in performance, stop using the battery. In other words, avoid trying to squeeze out every remaining bit of charge left. From here, you want to let the battery cool down for about two hours.

If you don't want to wait long, let the battery reach room temperature. Once it's cool, let it sit on the charger overnight. DeWalt claims you should be able to see a difference in runtime! 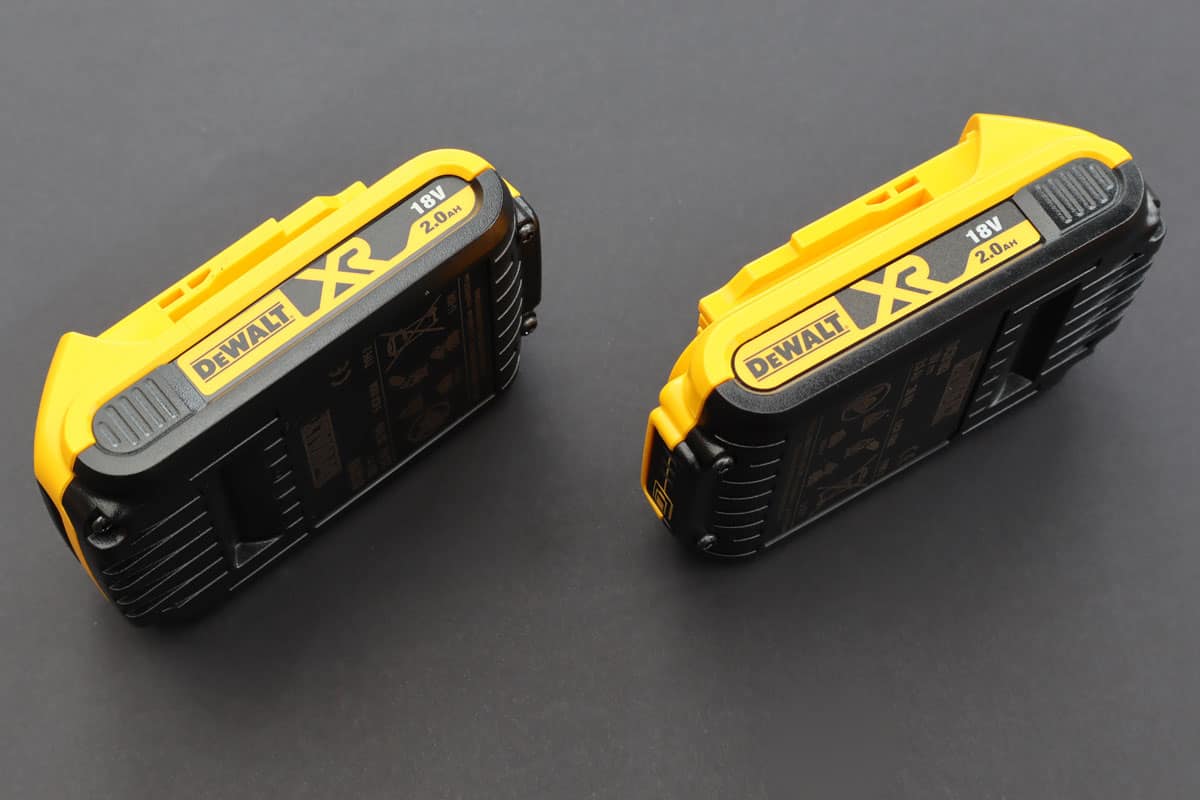 When electrical devices stop working suddenly, it's tough figuring out what happened. As we've found, DeWalt batteries stop working when they malfunction or become over-discharged. Hopefully, we discussed everything you need to know. Good luck resetting your battery!

Before you go, do you have other DeWalt battery concerns? Are you wondering how long it lasts? For more information, check out:

How Long Does A DeWalt Battery Last?

Here are other topics you might want to check out.

How Long Does Craftsman Battery Take To Charge?

20 Types of Kitchen Curtains and Valances You Should Know

How to Cover Popcorn Ceiling? [5 Steps]

How To Install Crown Molding On A Sloped Ceiling

How Wide Should A House Foundation Be?

How To Remove An Aluminum Screen Porch