Everyone has heard of copper as a popular material for pipes, but you've also likely heard it can be a costly material to use. This raises the question, "Is a copper pipe made of pure copper?" Surely, some additional materials are mixed in to help reduce the cost without risking the pipe's integrity. We've researched the fabrication of copper pipes to get a straight answer.

Copper pipe is mostly derived from pure copper. Because scrap copper is used in some products, there is the potential for some impurities. But recycled copper makes up a tiny percentage of copper piping. A small amount of phosphorous is added at the end of the smelting process for copper pipes to deoxidize the metal.

So now we know that a copper pipe is primarily, if not all, pure copper. Continue reading to find out what goes into making copper piping, and why some copper pipe is less pure than others. 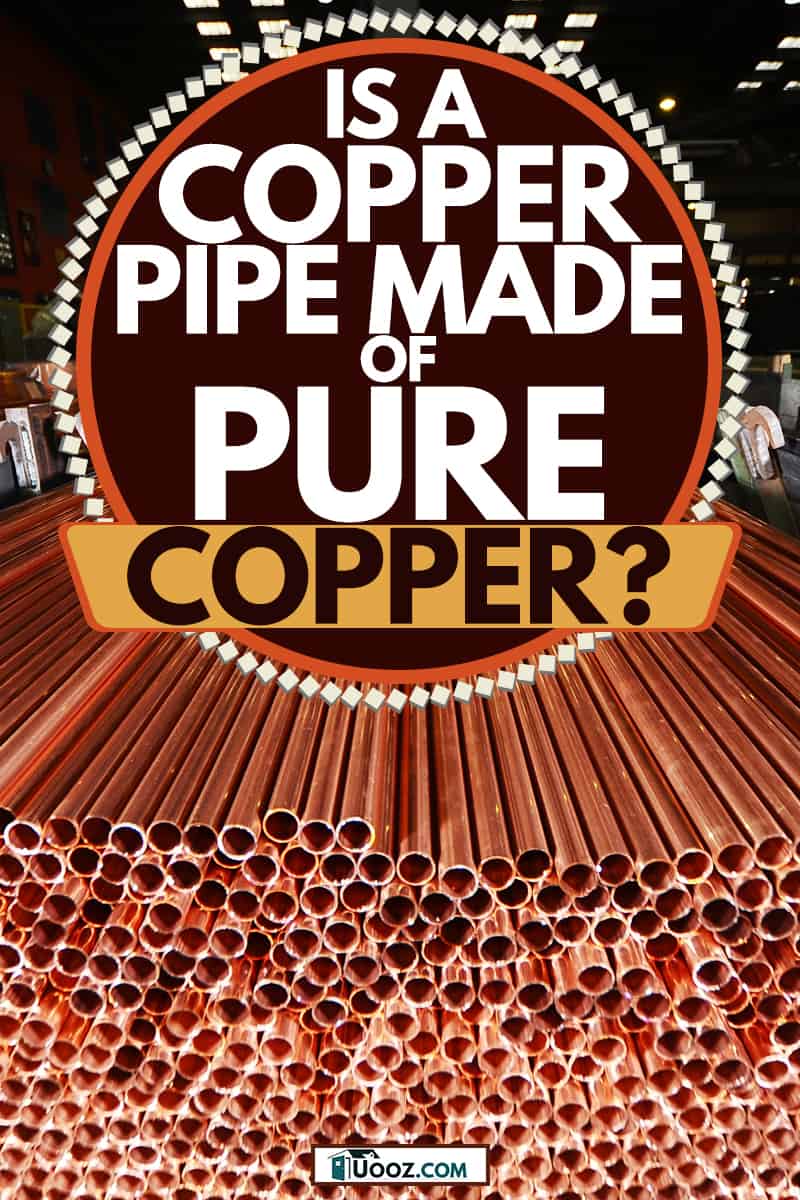 How is Copper Pipe Made?

Copper pipe begins with the raw material, either pure copper or copper scrap. Pure copper (cathode copper) is free of any impurities. If using scrap copper, the resulting copper pipe will have a small number of other metals, generally tin, iron, zinc, or nickel. This does not affect the integrity of the metal.

The copper is melted at temperatures around 2,400 degrees Fahrenheit; then, the melt is combined with oxygen, so any impurities rise to the surface and can be skimmed out. The copper is vigorously stirred to aid the impurities in their journey to the surface of the copper. Samples are taken throughout the process to test the purity. To deoxidize the copper once the desired level of purity has been reached, phosphorous is added. The copper is then ready to be cast into pipes.

View this copper tube on Amazon

Why Are Pipes Made of Copper?

There are many reasons copper makes an excellent pipe material. Copper is strong and exceptionally durable. Its structure can withstand a lot of pressure and outside damage before it is structurally compromised. Copper also resists corrosion in most underground environments, further increasing the pipe's durability and lifetime usability.

Copper is also sustainable. One of the great things about copper is that it can be continually recycled. Scrap copper can be melted and refined to make new piping again and again and again. There are more benefits to copper, making it a wonderful material specifically for plumbing purposes, which we'll delve into more below.

Is Copper Good for Plumbing?

Copper piping is ideal for plumbing purposes. Copper is known for its longevity; in fact, some buildings built back in the 1930s and 1940s still contain their original plumbing due to having used copper piping.

As mentioned above, copper is durable. On top of that, copper is virtually impervious, ensuring no outside contaminants make their way into the water supply. There are a slew of outside chemicals that could make their way into a water supply--insecticides, run-off from vehicles such as oil or gas, or fertilizers. These things can permeate plastic pipes. Copper keeps this from happening.

Copper is also anti-microbial, which means it can kill the bacteria in the water you intend to drink. However, some older structures might contain lead joints on the copper plumbing, leaching lead into the drinking water and causing health problems.

Though copper is largely safe to use for plumbing, if the water being moved through the pipes has high acidity, it can cause undesired reactions with the copper, generally causing corrosion in a material that is generally corrosion-resistant. For this reason, if the building owner is planning on using well-water, copper piping is not recommended.

Are Copper Pipes in Homes Unhealthy?

Most copper pipes used in homes are not going to be unhealthy. As mentioned above, copper pipes are not a good idea if you have well-water in your home due to the water potentially corroding the copper pipes.

Some studies suggest newer copper pipes are more likely to leach copper into the water; however, this is avoidable if the water is being used consistently and not allowed to sit in the pipes. Copper poisoning is extremely rare. High exposure to copper would be needed for the effects to be noticeable. Headaches and upset stomach are the most commonly shown symptoms of too much copper. There are many home water testing kits available to ensure your water is safe if you are concerned.

Copper is actually essential for the human body—copper aids in iron digestion, healthy bones, and a healthy cardiovascular system. Low-level copper ingestion is much more likely to aid in your health as opposed to adversely affecting it.

Are Copper Pipes Better Than Plastic?

There are pros and cons to both copper pipes and plastic (PVC) pipes. Although copper pipes will likely last longer and keep out more contaminants, PVC pipes are easier and less expensive to install.

Copper pipes must be welded together. This makes it close to impossible to install copper pipes as a DIY project. If you plan on redoing your own plumbing, the most logical choice will be PVC. PVC pipe is also quieter than copper pipes. There's a reason older homes sound louder when someone flushes the toilet or washes a load of laundry.

PVC does not corrode because it is plastic. This makes it more appealing to those using well-water who want to avoid the potential corrosion and expense of copper pipes.

What is the Difference Between Copper Pipe and Copper Tubing?

Copper pipes are usually rigid and resist bending. Pipes have a pressure rating, which is why they are more commonly used to move fluids.

There are some major differences in the classification process for pipes and tubes. Pipes use schedule and nominal diameter. Tubes are classified by their outside diameter and thickness. Essentially, the most important measurement for pipes is the inside diameter, while for tubes, it is the outside diameter.

Additionally, tubing can be joined by means other than welding, which makes them less apt at carrying fluids. Copper tubing is more often used in HVAC systems, while copper piping is used in plumbing.

What Else Can I Do With Copper Pipes?

Copper pipes can be repurposed as a multitude of things. Copper is a popular material in modern art. It can be used in sculpture or to bring an industrial look to your home. Use some copper pipes and a wooden pallet to create an interesting coffee table for the living room. Spark conversation with visitors when they ask about the copper towel rack in the bathroom. Polished copper is a beautiful look, so stretch some creative muscle and use it decoratively.

Additionally, spare copper pipe can be sold as scrap for recycling as it is a highly sought after material. Think twice before just throwing out old copper pipes or tubing.

Copper pipes are comprised of almost complete, pure copper. Great care is taken to ensure the metal is as pure as possible. Copper pipes are great for plumbing and transporting your water safely, and can also be used for interesting art projects. Consider using copper if you ever find yourself building a new home, or your pipes need an upgrade.

Should You Caulk Around A Bathroom Sink Faucet?

How To Close A Garage Door Manually

Should You Dry The Floor After Mopping?