When you’re constructing any room or building, it’s always good to know about the hardware you’re using, and also the building materials you’re working with as well as the materials' limitations. There are many different varieties of nails to work with, and maybe you picked out brad nails for your job. Well, we’ve done the research for you, and in this post, we’re going to tell you if brad nails will be able to pierce metal.

Brad nails are made of 18 gauge steel wire, they’re thin and easy to hide, and are good for use in sensitive woods and other delicate materials. But when used in sturdier construction, their thin profile may not hold as well. That being said, when using a nail gun, you will be able to pierce sheet metal or metal studs with a brad nail almost every time. It might not provide the best hold, but for something temporary or aesthetic, it will definitely suffice. It’s only over time and after constant vibrations that you’ll start to notice problems starting to occur.

Now that we’ve given you the quick rundown, we really feel that we should elaborate a bit more on the subject. If your current construction job has you planning on putting brad nails through metal, you’ll want to read ahead as we discuss the proper techniques to use, what to do without a nail gun, and even how to hide your handy work once the nails are secure. 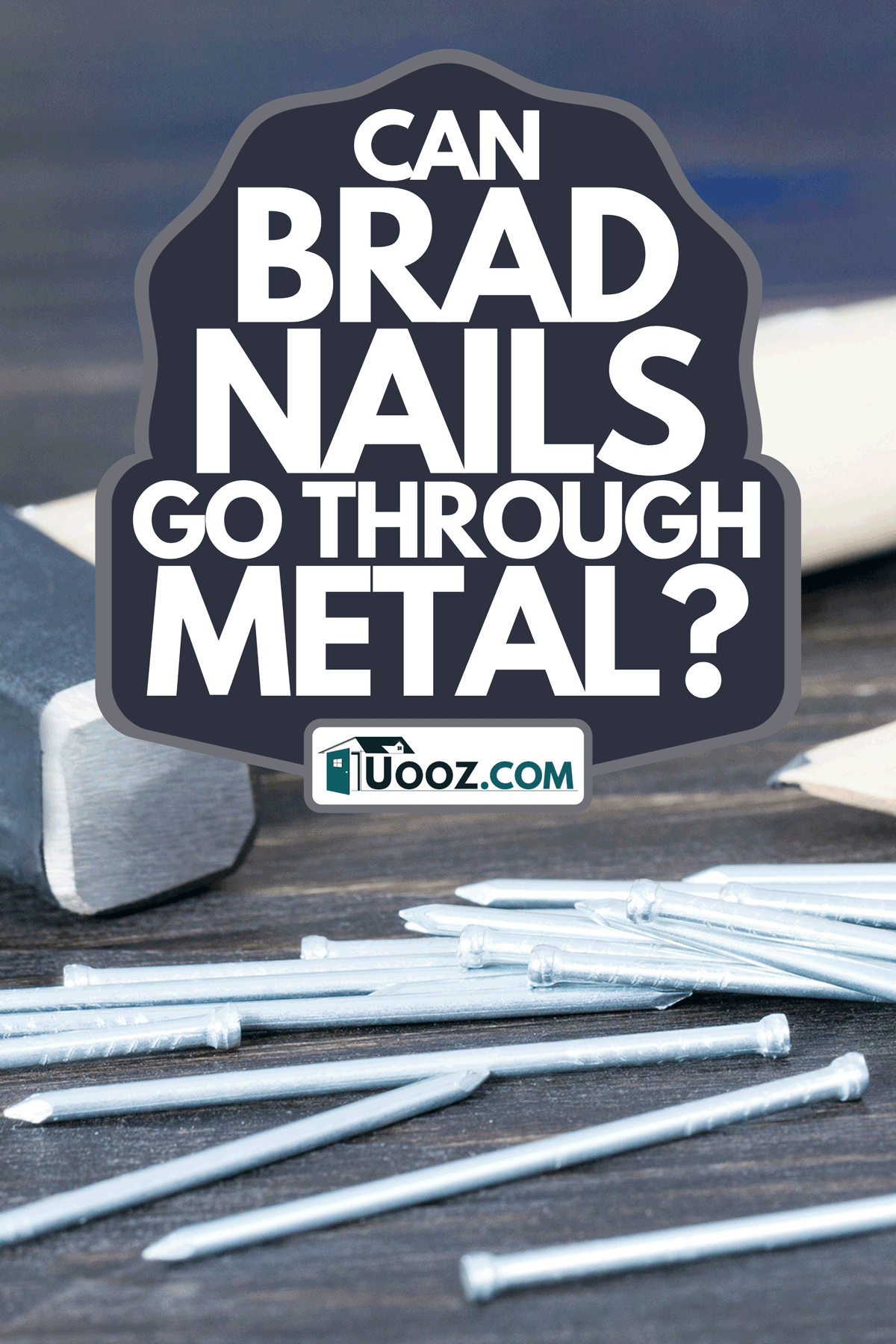 Before You Get Started

So, the first step would be to plan things out, just like any other job. Is the construction project you're working on a new room in a house, or are you installing some vanity trim in a bathroom?

Be honest with yourself about the scope of your project and only plan on using brad nails to puncture metal if you believe that what you're nailing down will hardly experience external traumas and that the nails won't be supporting much weight.

Keep in mind that they specifically manufacture metal cutting screws that would most likely better suit the task you're thinking of using brad nails for.

Do not attempt this job without a nail gun for your own safety. Most modern nail guns are capable of shooting brad nails well above 100 feet per second, and you won't get that kind of power with your hands. 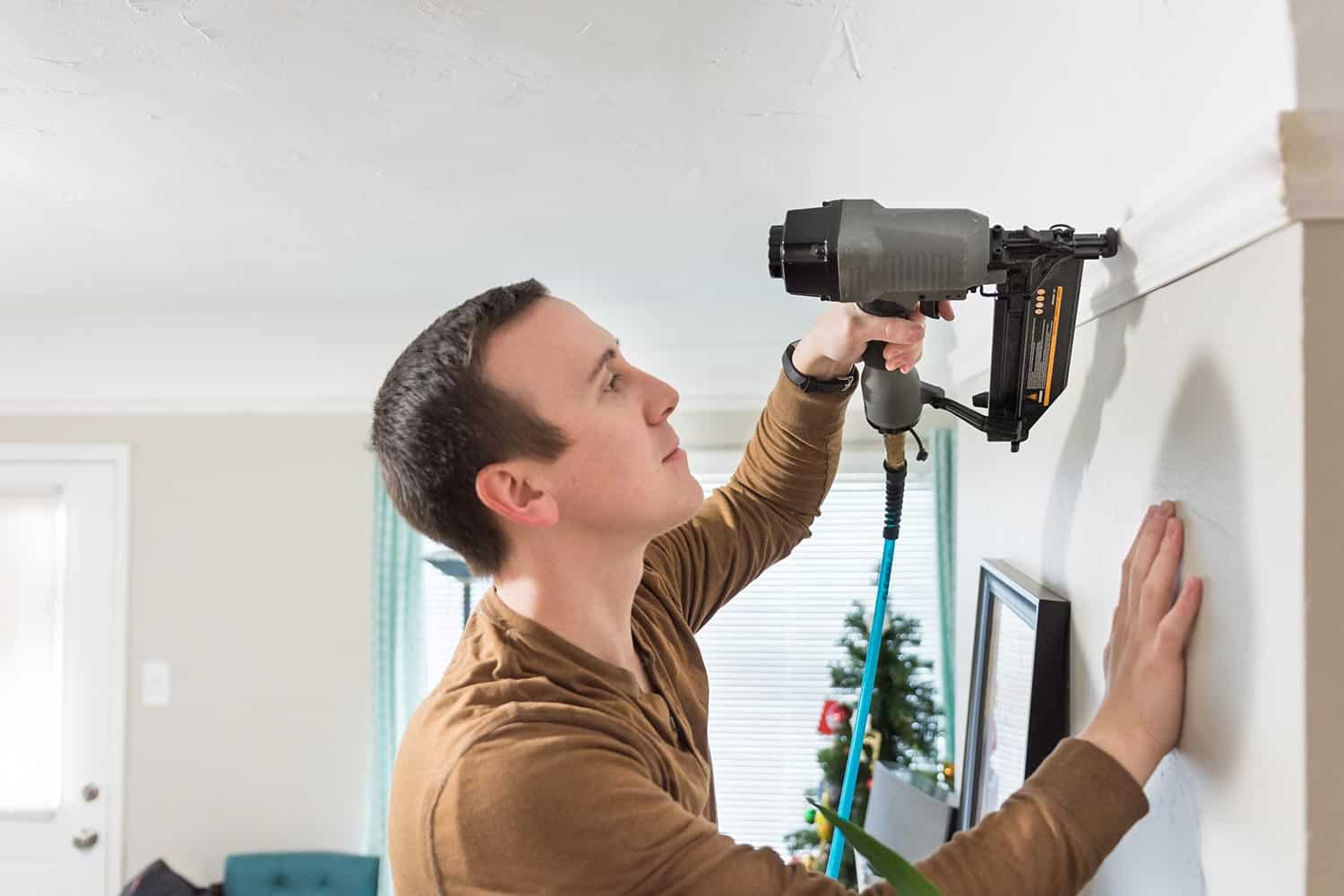 How Do You Nail Into Metal Studs?

When nailing into metal studs, you’re practically going to need a nail gun. Attempting to nail through metal with a hammer could go wrong as the nail can easily slip, forcing you to instead hammer your fingers with the full force of the swing. But you also need to realize that using a nail gun requires caution and that it’s not 100% either.

First, you’ll need to pick up the manual and read it, an important step that is too often overlooked in the unboxing experience of a new tool.

Next, please understand that you are using a tool with a combustion chamber that fires a projectile at a high speed. Be careful where you aim it, and wear protective equipment such as protective eyewear and earplugs.

Once you’ve loaded your nail gun (according to the instructions depicted by the user’s manual) and connected that to a power source, whether it be a battery or an outlet, you’re ready to go. If it’s your first time with the tool, we’d advise you to fire a few practice nails into some leftover wood to get a feel for the device.

Disengage the safety on the nail gun and place the barrel perpendicular, with no angle at all, to the material you want to nail. If you’re just nailing wood, then you can crack it by shooting at an angle, but with metal, you run the risk of the nail bouncing off and flying in an unexpected direction.

Keep your hand steady, don't lift the tool off the material, depress the nosepiece, and pull the trigger. If all has been done correctly, the nail should now be through the metal. Do note that if the nail fails to pierce, it will likely cause a jam, and you’ll have to deal with that immediately before attempting to fire again.

Can You Use Brad Nails Without A Gun?

The nail gun was invented in 1954, and nails have been used as early as ancient Egypt. You can use almost any nail type without a gun, but you won’t be able to pierce metal efficiently unless you’ve got some superhuman talent.

If you just need to nail through wood, you should be fine. Brad nails have a smaller head than other nails like common nails or finish nails. This does mean that you have a smaller target, so take your time. An important thing to keep in your mind is that steadily tapping the nail in will get the job done faster than smashing your thumb because you wanted to hammer the nail in as few strokes as possible.

There is a fine art to hammering a nail, as hitting it too hard or too soft can cause issues, so you need to be firm in your hit. After it’s hammered down, you can additionally use a nail punch/nail set to drive it in further. 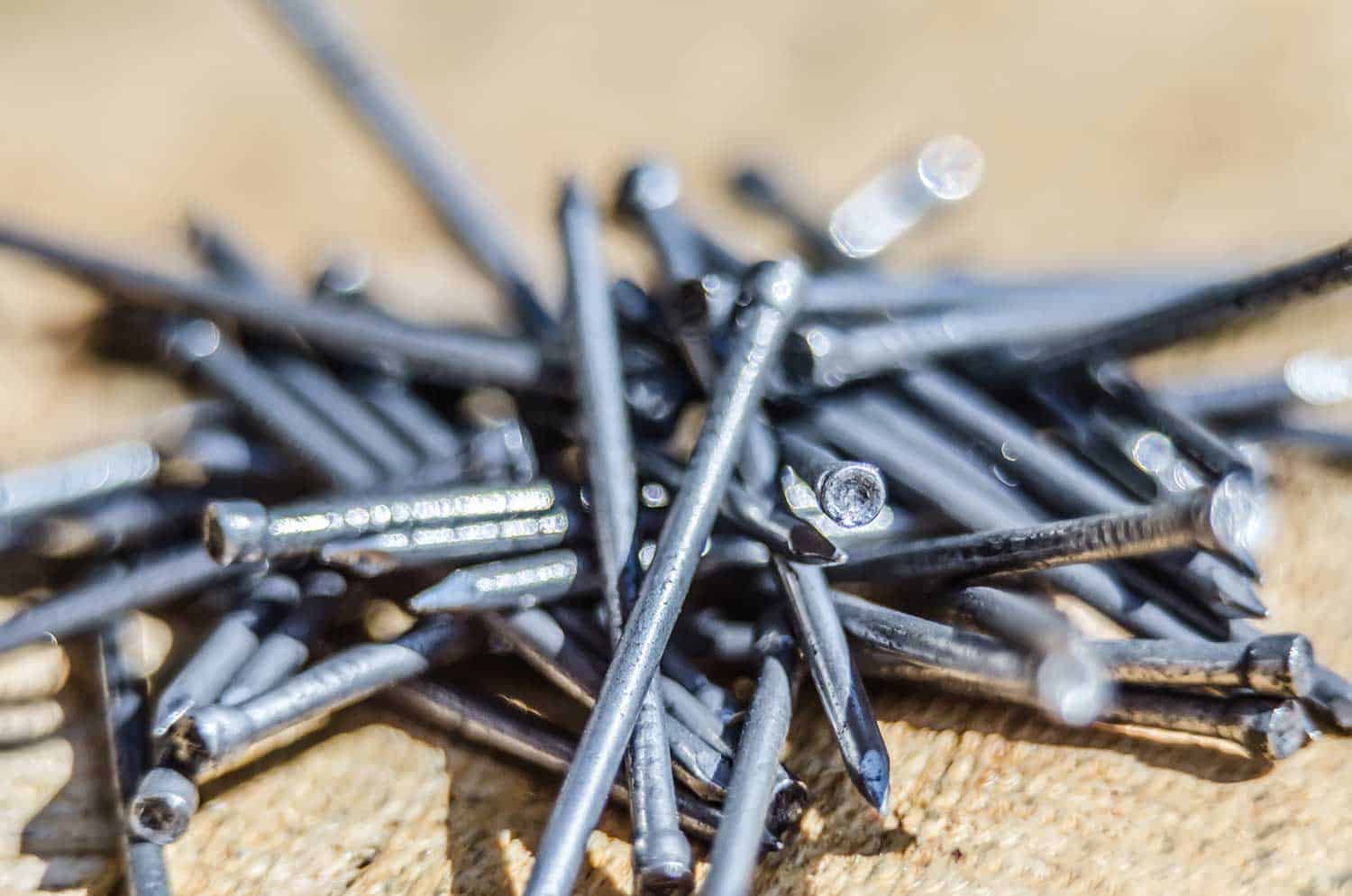 Also, there are other tools you can get, such as a brad pusher. This will work somewhat similarly to the nail gun, but you’ll have to use more elbow grease than pulling a trigger. It’s a much cheaper alternative to a nail gun that’s also much quieter, and it doesn’t require power which is a huge benefit.

How Do You Hide Brad Nails?

There is a multitude of ways that you can hide the nails. One of the easiest and most tried and true methods is wood putty. You’ll have to sink the nail into the wood a small bit. This can be done with either a nail punch, which was made for that job exactly, but in a pinch, you can even use another nail as a substitute.

Just be careful. Once the nail is sunk into the wood, then you’ll be able to apply some wood putty on top and scrape away any excess to create a smooth surface. Once dried, you'll most likely want to sand it down to get it looking perfect.

If you fancy yourself more advanced, you may want to try using wood plugs or even a wood gouge and glue. With wood plugs, you'll need to remove quite a larger circle piece of the wood, slightly smaller than the diameter of the plug.

You can then use a mallet or other tool to pound the plug in. Be wary of overdoing it lest you split a more delicate piece of trim or the like in half. Once the plug is secured, you can sand away any excess to be left with a smooth, seamless finish where nobody will ever be able to tell there was a nail there.

With a gouge, you can remove a portion of the wood, nail it down in the hole you've just cut out, and then use glue to put the cut wood back in place. With enough practice, you can make seamless holes this way. One tip from us is to remove some of the wood from the side that will be on top of the screw so that the nail head can't create a gap.

You're Ready To Go!

Yes, we know that we have just given you a lot of information regarding brad nails and if you can out them through metal. After reading through it all, we're confident that you're now ready to begin construction using brad nails! Remember that they should only be used in metal for temporary or aesthetic purposes and that you're running a risk using them otherwise. Above all, keep our safety tips in mind as you work. 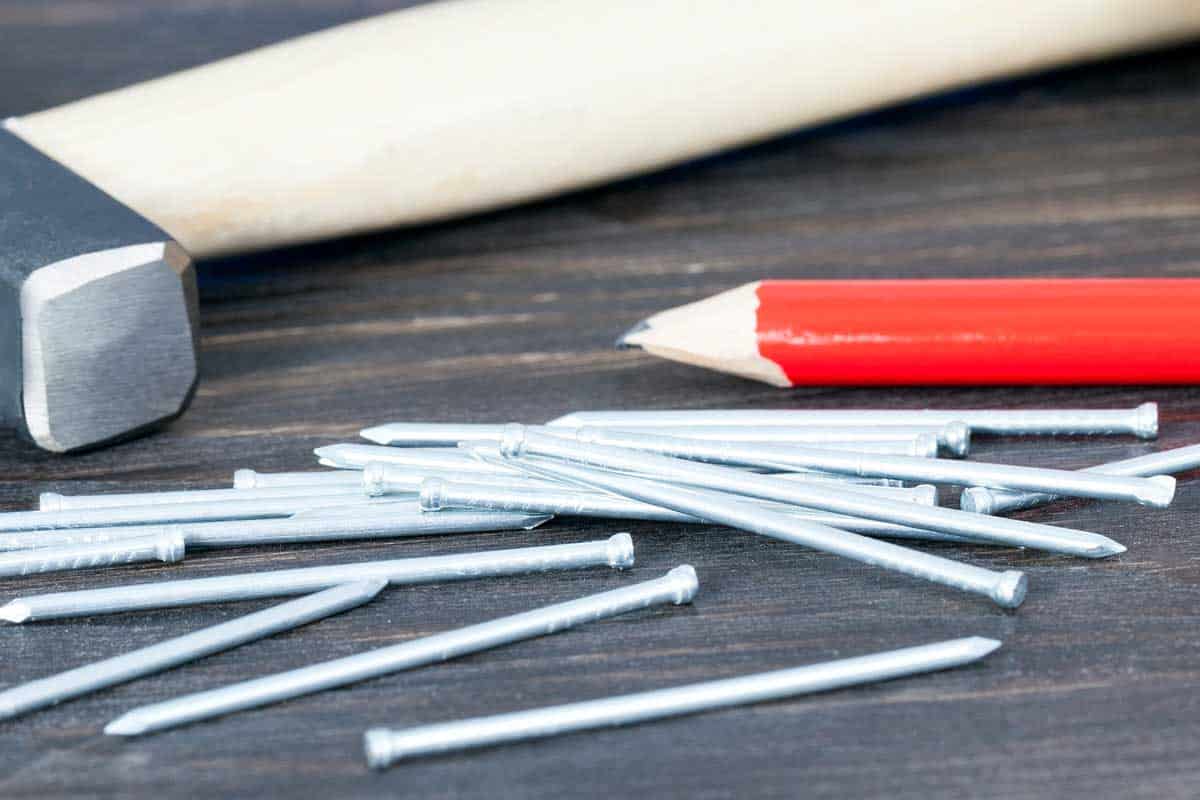 If this article had some helpful information for you, then you should really consider checking out a couple of our other posts:

How To Remove Brad Nails From Baseboards?

How Far Apart Should Brad Nails Be?

How To Fill Gaps Between Cement Board And Drywall?

Lag Screw Vs Lag Bolt: Is There A Difference?

Why Does Toilet Water Move When Other Toilet Flushes?

How To Install Range Hood On Vaulted Ceiling